The Australian Cyber League's second stop in its 2012 circuit. 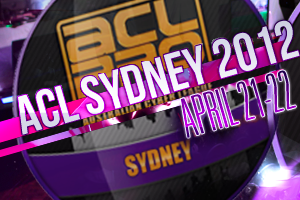 $1750 AUS Dollars is spread among the players as seen below:

The top 16-18 seeded players from around the country will be pitted against the top 6-8 players from an open tournament to form a 24 player championship group stage where the top 2 players from each group enter an 8 player double-elimination bracket.

The first map in each round will be universal between all participants. Sub-sequential maps will be chosen by the loser of each game. The same map cannot be played twice in a single series.

Both online and regional seeding tournaments are held for direct seeding into pool play information about which can be found below: