Note: Much of this article is based on empirical research and scattered Blue posts, so there might be errors and inaccuracies.

The Battle.net Leagues are SC2's replacement to SC1's ladders and are Blizzard's official player ranking system. There are currently seven Leagues, each divided into numerous divisions as well as a Practice League for rookies.

Players are placed in a league after having completed 5 placement matches. After that, a player may get moved to another league, depending on performance. Though the time and frequency of these movements are kept explicitly hidden. Regardless of a player's performance, however, placement matches currently do not place players in the highest league, Grandmaster. With even a perfect placement record, a player must work their way through the initial placement division(s) before being placed in Grandmaster.

There are numerous divisions within each League, with each division being composed of up to 100 players. The name of each division is made up of a word from Starcraft terminology, and a letter from the ICAO phonetic alphabet, such as Gold League/ Division Zeratul Juliet.[6] The process of matchmaking is based solely on MMR and not on a player's division or league. This means players will often face opponents from other divisions, and may face opponents from different leagues. Players do not usually move from one division to another within the same league, though it is technically possible for a player to manually leave their division, and happen to be placed back into the same division.

Prior to Season 9, leagues below Master were subdivided into narrow skill ranges called division tiers.[7] The purpose of these tiers was to normalize displayed point ranges across a league via modifying point totals with fixed offsets. The lower the skill level of a tier, the larger the hidden point offset. Season 9 removed[8] division tiers, thereby widening the player pool for any given division in a league. As a result, points after Season 9 can be compared across divisions (but still not across leagues). Aggregators such as RankedFTW.com can be used to compare points within a league over an entire region.

As Grandmaster League is twice the size of all other divisions. 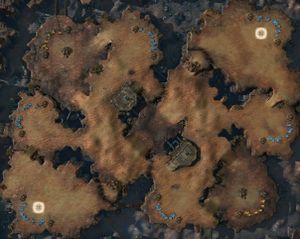 A Novice version of "Blistering Sands" is used in the Practice League.

The Practice League no longer exists in the game, but was available early on in Wings of Liberty. The Practice League was separate from the rest of the ladder, which allowed new players to practice multiplayer matches prior to their placement matches. Practice league was completely optional. Players could conduct up to 50 matches in Practice league, which used a special "novice version" of the ladder maps. The novice versions differed from the standard version as they included additional destructible rocks in rushing paths to slow the game down. This provided early game protection for newer players, which afforded them time to explore and learn both the interface and game. Additionally, the game speed in Practice League was "Normal" instead of "Faster". After 50 matches, regardless of whether a player won or lost, players progressed to their placement matches for the competitive leagues.

"The other thing we're introducing is a casual league. It will work just like the regular league, except it doesn't do a bunch of ladder stats, so you don't have to worry about your rank and where you are. It'll be at a slower game speed setting, so it will be what you're used to from the campaign, and it will be on a bunch of maps that are anti-rush -- that are designed specifically to prevent rushing. Now, I can't promise you that you won't die at minute six -- you could be minding your own business and here comes a fleet of Banshees and, "Aaauugh! I'm dead!" -- but you won't die in minute two. I can promise you that. You'll at least have a chance to get your feet wet and experience some of the tech tree before you get rolled." (Quote by Dustin Browder - lead game designer)

Players are ranked within their division based on their Points. The function of points is to determine a player's rank within their division. After having completed their placement matches, players start out with 0 points. The number of ladder points is only weakly correlated to skill. Especially if players have unspent bonus pool, ladder points tend to measure activity level much more strongly than performance.

On November 15, 2011, Blizzard released a chart for season 4 explaining the point cutoffs required to almost be guaranteed a promotion.[10] This chart is a rough estimation of the number of points necessary to go from the bottom end of one league to the bottom of the next-highest league. The charts also contain information for team formats and for all regions. Note that this chart reflects the Wings of Liberty ladder, and no such chart has been published for Heart of the Swarm, where the league populations, bonus pool accrual rate, and season length are different.

You earn or lose points by winning or losing matches, respectively. To simplify how it works in practice[11]:

(of course, if you are the slightly/favored player, then "x" is negative, which means you will lose more or win less than 12 points)

As of Patch 2.0.4, Players no longer lose points immediately. When a game is lost, points are subtracted from the bonus pool of the player.

After a player is promoted or demoted into a different league, points are always reset to 73 + spent bonus pool.[12] Because of this, bonus points earned are never lost when changing leagues.

The Bonus Pool is the sum of all "bonus points" a player can get, which are added to the rating points a player earns after a victory or, in the case of a defeat, points are deducted from the bonus pool rather than the player's ladder points. The Bonus Pool serves two purposes: to encourage players to play games so their points are always trending upward, and as a global decay mechanism since all players have equal access to the same amount of Bonus Pool.

Players receive Bonus Pool points at a set rate per league. Before Season 3, all players received points at the Master league (original) rate. Season 3 introduced a separate accrual rate for leagues below Master. A player joining StarCraft freshly after the start of a season instantly receives the Bonus Pool as if he started at day 1 of the Season. (Example: Master League Player 1 joins on week 3 after the beginning of the Season he will receive a Bonus Pool of (180*3) 540 Points instantly after finishing his Placement Match.)

Bonus pool accrual rates have been tuned for team matchmaking modes to make them more competitive:[4]

Performance is measured via MMR rating, very much like the WoW Arena Matchmaking System. This rating decides which opponents a player will meet, and tries to quantify their skill level. The aim of the MMR is to rank players in such a way that they have a roughly 50% win ratio when paired against those of similar MMR.[14] When a player's MMR climbs above a certain value, they will be promoted into the next league.

Each play-season the visible points will be reset, while the skill rating, MMR, stays intact.[14]. Since Patch 3.4.0 (Ladder Revamp), MMR is no longer hidden to players.[4]

There also is a value "sigma" that measures how uncertain the system is of a player's MMR. This is usually high if a player has not played many games recently, or if they are on a winning or losing streak. Sigma is used to calculate how wide a player's search range should be, and by extension how much their MMR will change as a result of playing rating-distant opponents (i.e. for Bayesian inference).

In Patch 3.4[4], as part of the Ladder Revamp, Blizzard made numerous changes to the ladder system. MMR is now visible for players, each ladder league below Grandmaster is split into three tiers, and the post-game screen now shows specific information about a player's current skill rating, how close they are to the next tier, and the upper and lower limits of their current ladder tier.

The MMR boundaries are based on a prior distribution from the previous season, and during each season roll, the values are recalculated for the upcoming season.

In Heart of the Swarm, if a player did not play any matches for an extended period of time, their MMR would decay, or automatically decrease. The details of the system are unknown, but it appears to be a linear decay,[17] and Blizzard has confirmed that decay begins after 2 weeks of inactivity, and decay stops after 4 weeks of inactivity.[18] MMR persists from one season to the next for each game type, as long as a Seasonal Placement Match was played for that season. If a Seasonal Placement Match was not played last season, then MMR and uncertainty are both reset to their default values and the system effectively "forgets" about that player. A special note about this, though: Random Team MMR is linked with 1v1 MMR, which means that if no 1v1 games were played last season, but Random Team games were played, a player's 1v1 MMR would not be reset at the start of the next season.

Every arranged pair of 2v2 players is given a single rating. So players A+B's team will have a ranking completely unrelated to players A+C's team. In 2v2 random match-ups, an average rating of the two players will be compared to their opponents rating. This rule presumably applies for 3v3 and 4v4 as well.

Starcraft II ladder is divided into several seasons per year, and the final results are generally recorded at the end of a season.