Battlecruiser (Legacy of the Void) 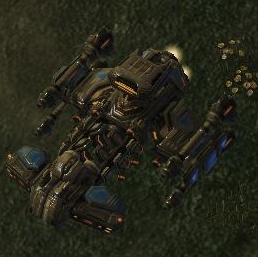 The Battlecruiser is the Terran's capital ship. In LotV, the Battlecruiser has been granted the Tactical Jump ability, allowing it to teleport anywhere on the map (regardless of fog of war).

It can be constructed at a Starport with a Tech Lab add-on once a Fusion Core has been built. Similar to its Brood War counterpart, the Battlecruiser is a slow but powerful unit. It can deal large amounts of damage and has high health. This flying fortress boasts the highest default armour value of any combat unit in the game, which can make it particularly hard to kill. However, like in Brood War, the Battlecruiser is rarely used due to its slow speed, high cost and lengthy tech tree. Despite this, if built when the Terran has a large advantage, it can seal the victory and make a comeback very difficult. Players also sometimes pull SCVs to repair Battlecruisers during combat. The Battlecruiser retains the Yamato Cannon from Brood War.

While held back by its excessive cost and time to build up to, the Battlecruiser is one of the few units that can harass bases even under heavy fire due to its high default health and armor, and its ability to fire while moving. With proper micro, the Battlecruiser is very likely to survive long enough to use Tactical Jump to retreat back to the player's side of the map to be repaired and repeat the process. Battlecruisers that survive past the early to mid game can also obtain the Yamato Cannon upgrade later on to snipe bases and T3 units. This makes the Battlecruiser very cost effective if it survives and is a global pressure tool (not unlike the Ghost's Tactical Nuke). However, a player who has opted to rush Battlecruisers will most likely have minimal defense back at home and is vulnerable to counter attacks as well as be behind in upgrades due to the aforementioned cost of going such a build.

Once Weapon Refit has been researched this is visible on all the player's Battlecruisers: the plating at the tip of the model (covering the "muzzle" of the Yamato Cannon) is opened up and there is a pulsating yellow light in the "torso".

Battlecruisers can occur in the very late game, although they are very rare. Since they are considered Massive units, they take bonus damage from Tempests, which can attack the Battlecruisers from afar. If there are Tempests on the field, it is important to target them using Yamato Cannons as soon as the engagement begins. If hit by an EMP, a Tempest only requires a single Yamato Cannon shot.

Battlecruisers will use their more powerful ATS weapon against the Colossus.

Battlecruisers are most commonly seen in the mirror matchup. In longer TvT games, it is common for the player with air dominance to construct Battlecruisers. Since they are heavily out-ranged by Vikings, they must be supported by Vikings (and preferably Ravens as well) to be effective. Yamato Cannon is typically used on the opponent's Battlecruisers or Vikings to preserve air superiority and to prevent kiting.

Without Yamato Cannon, Cyclones with Mag-Field Accelerator are a large threat to the Battlecruiser due to the Lock On capability to deal 800 damage to a single mechanical unit and maintaining distance from the Battlecruiser's primary batteries easily.

The Battlecruiser has some place in TvZ matchup. Rushing to build some Battlecruiser on the battlefield can sometimes force an opponent to deploy more static defense or anti-air unit to counter the mighty ship. The first Battlecruiser can be used as workers harassment thanks to Tactical Jump, an ability to fire on the move and able to fight a handful of unupgraded Hydralisks. Depending on situation, the player may need to switch tech back to factory-based army or deploy more air units to assist the Battlecruiser.

Transitioning to an air-based composition still takes a significant amount of time and resources, which can be done safely in TvT due to the defensive strength and efficiency of Siege Tanks against Terran units. However, in TvZ, the Zerg player has a large window of time to end the game before a full sky fleet can be created.

In late game, Battlecruiser can become a potent unit to soak up most damage and secure a quick kill on large target using Yamato Cannon. They are weak against the Zerg Corruptor upfront due to their weak air to air (ATA) weapons and slow speed. Many players offset this by using the Raven's Anti-Armor Missile on Corruptor groups. A group of Infestors can stop Battlecruisers from escape via Tactical Jump with Fungal Growth. Neural Parasite is the direct counter to Battlecruiser since they are high-cost units, losing them will likely to spend most resource and time to rebuild a full army. Try to avoid flying over Infestors and let other units such as Raven and Banshee to counter the threat.