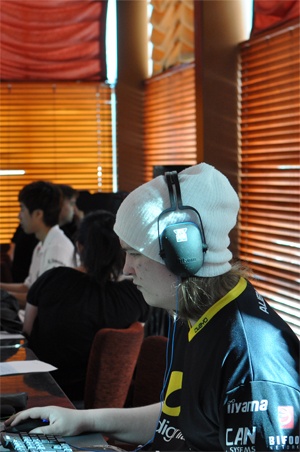 In September 2010 Bischu joined up with 4Kings to pursue gaming in a more professional capacity.

"I never was really competitive in any game before. Mainly because I played StarCraft BroodWar and there you had to live in Korea to be able to be compete at the highest levels. I still held a fairly high level outside of Korea. But now with the release of SC2 like many others, I've decided to give Professional Gaming a shot."[1]

Bischu won his BYOC group at DreamHack Winter 2010 and qualified for the main tournament. There he ended up in a three way tie with Socke and Naama. The players were still tied after a round of tiebreakers after which Bischu got eliminated by the draw of a straw.

In December 2010 Bischu left 4K to team up with his fellow countrymen SjoW and merz in Team Dignitas.

"First off I want to express how overly excited I am to be able to play for Team Dignitas, to be a part of such a prestigeous organization with amazing players like they have is something I take great pride in. Be it offline or online, I'm going to give it my all to ensure that I represent my team in a formidable fashion and further develop my skills as an SC2 player. Also having met some of the SC2 squad members at various events I know that I will have a blast with this team, I'm looking forward to what our team can accomplish in the future and lastly I want to thank the Team Dignitas management for giving me this wonderful opportunity."[2]

On August 2012 Bischu qualified for the NASL Season 4 by winning the first qualifier. He played in Division #4.

On February 1, 2013, Bischu announced that he and team Dignitas parted ways.[4]