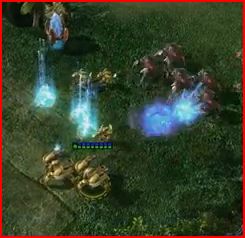 This build was developed as a direct counter to the 4 Gate on Tal'Darim Altar by Bischu.

It is an unbelievably straight forward strategy to execute. All the minerals line up almost perfectly, as well as the gas. The two important points are to never get supply blocked and take the gas as soon as you have 75 minerals on 14 supply as well as saturating it as soon as it finishes. If you do not do both, the Robo and the Warpgate will be delayed, as well as the Immortal, leading to a swift 4 gate related demise.

This build is designed specifically for Tal'Darim Altar. It is also potent on any map without a ramp (thus provoking the opponent to 4 gate), that is large enough for the first Stalker to not be able to simply turn up and kill the defending player.

According to NightEnD at HomeStory Cup IV builds such as this are easily dealt with by the 4 Gater warping in pure Zealots for a round or two before attacking. Due to the absence of a Stalker it is easy to scout, and so this build can only work as a surprise counter. Through much testing, if the defender micros well and adds another Gateway while only chronoboosting his own Gateways it is possible to hold once all the Stalkers are dead by kiting with the Immortals until the 4 gate runs out of money.

I have found a double Immortal Warp Prism drop to be a strong transition out of this, while continuing Immortal production and slowly teching to Blink by adding the second gas, resuming probe production and adding Stalkers.

When doing a double Immortal drop in PvP, remember that probes die in a single volley, Stalkers are made of paper and Pylons die in seconds. With good micro, this can easily win you the game as the Warp Prism should be nigh on unkillable due to the opponent's lack of gas. Beware of a counter, and be prepared to pull probes if they do.