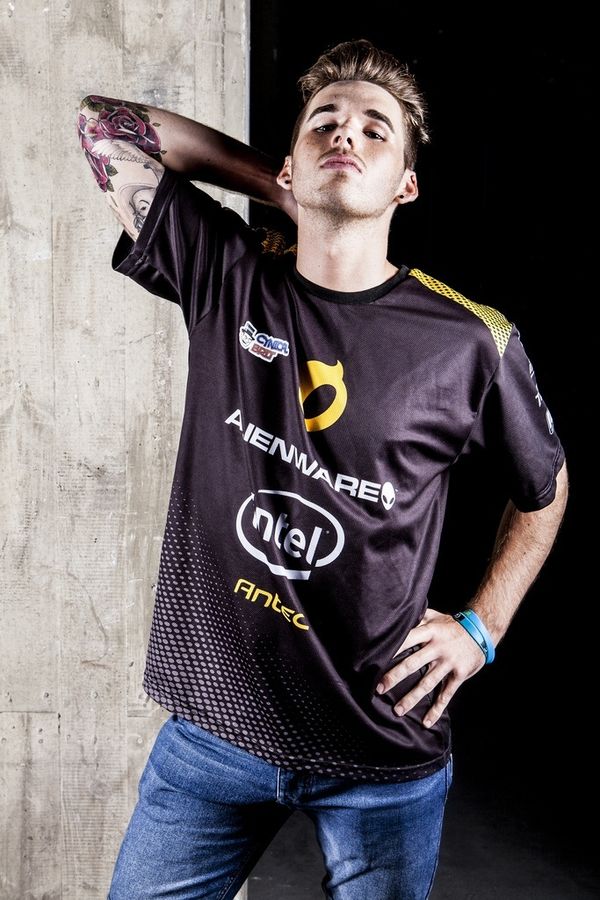 BlinG was formerly a Halo competitive player before switching to StarCraft II after the release of Wings of Liberty.[1]

BlinG started off winning a few tournaments in the UK scene and making it far in i41 and in various weekly events including a second place in CraftCup#39, losing to Nerchio in the final. He qualified for the finals of the 'Team Dignitas Gamer Search' and won the live finals event in London on March 27, 2011.[2] This tournament fuelled his entrance into the progaming scene as it not only granted him £750, but because of his performance in the tournament he won a spot on the team, which he accepted.

In the following weeks he played in the 'Gadget Show Live' event where he came 6th; beating HasuObs before being knocked out. He then made it to the final of the Multiplay i42 LAN where he defeated many top UK players, but defeating SeleCT. He won the winners bracket final but lost the overall final: 4-3 to his new teammate SeleCT, who came up from the lower bracket.

At Multiplay i43, BlinG managed to storm through the initial group stages and entered the playoff bracket. Here he lost to StarEagle and then Fargo in the winners and losers brackets respectively. At this tournament a qualifier was run for the WCG grand finals. The 32 player tournament was won by BlinG.

At the WCG finals, BlinG was placed in group G with players such as KiWiKaKi, LoWeLy, ClouD, Strelok, and ToD. He was able to convincingly top his group 6-0, advancing him to the round of 16, where he was matched against teammate KiLLeR whom he defeated 2-1. His tournament run ended in the quarterfinals where he was beaten 2-1 by Mvp.

After this breakout performance, BlinG was invited to the HomeStory Cup IV, and placed third in his group after beating DarkHydra and losing 0-2 and 1-2 to DarKFoRcE and JYP respectively and was knocked out of the tournament.

Shortly after the HSC4 tournament, BlinG faced off against DeMusliM in the War of the Roses show match.[3] This showmatch had the largest prizepool to date in SC2. BlinG charged off into a 3-0 lead, with DeMusliM seemingly struggling to adapt to BlinG's Zealot and Psi-Storm heavy style. BlinG used Warp Prisms effectively to shield his High Templar from the Ghost's EMP and get closer to the Terran's army in order to deal devastating blows to the bio army. DeMusliM made a comeback in the series and in the end it was closely fought, with BlinG eventually taking the series 5-4 and taking the unofficial title of 'Best player in the UK'.

In January 2012, he went to live for a few months in the Millenium House in Marseilles to practice with Stephano, Adelscott and Tarson.

On February 24, 2012 it was announced that he would receive a personal sponsorship from TotalBiscuit.[4]

On the 5th of May 2012 BlinG announced in an interview with definitive esports that he would be moving to Exeter. He was excited about this move as it would allow him to have an upgraded internet to what he had previously. He would be able to practise more and stream his games, which he said would give him more confidence when playing international tournaments as the lack of practise affected his mental state and his ability to perform well in tournaments.

BlinG participated in the 2012 Spring Arena but was knocked out in the first round of the winners and losers bracket. Dignitas Newman on The GD Show said that: "[BlinG] lost stuff that belonged to the team" and that they were not sure if they would send BlinG to tournaments beyond (the already booked) 2012 MLG Anaheim for the foreseeable future.[5]

Bling played at the 2012 Dreamhack Open in Valencia, Spain. He went 3-0 in his group, placing him first over the other notable player, which was Socke. In the second group stage he was placed with ForGG, Moon and Harstem. He got 3rd place in his group, going 1-2, but stated he was still happy with how he performed.

He participated in the tournament, Trial of the Xel Naga, hosted by Day9 and Red Bull, in which he beat Bomber to get to the semifinals before getting knocked out by iNcontroL.[6]

In December 2012 BlinG attended the ESET UK Masters 2012 tournament at the Insomnia47 Gaming Festival in the United Kingdom. In the groupstage he beat FluNIgs, lost to Ourk and beat Jamesykins to take second and progress to the playoffs. He faced Protoss teammate DreAm and took a 2-0 victory and advanced to meet another teammate in the form of Zerg JonnyREcco whom he bested in a close 3-2 match. In the final he met German Terran KrasS whom he swiftly beat 3-0 to take first place and £2,500.

BlinG made history in Heart of the Swarm by becoming the first British player to advance to the Round of 16 in WCS Europe. In the 2014 WCS Europe Season 1 Premier League, he upset both StarDust and Happy to take first place in the Round of 32's Group E.