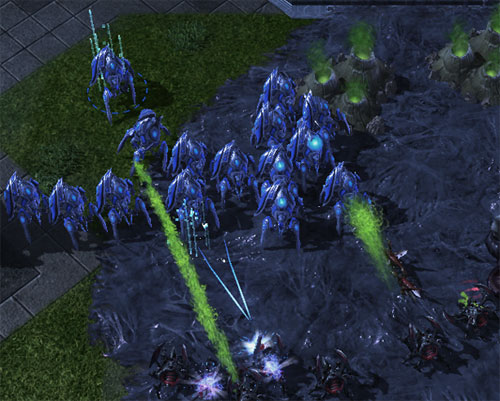 The Blink Stalker Push is an aggressive build that is primarily used against a fast expanding Zerg opponent. The rush distance between the players is important in determining the amount of pressure and damage - closer is more favorable. The use of the ability Blink early in the game versus a Zergling-based army scattered with a few Roaches is an incredibly powerful tool to minimize Stalker losses. Transitioning out of the build is difficult due to the threat of a hard counter-attack. Therefore, this build requires almost perfect execution by denying the Zerg's Hatchery. The use of a forward Pylon is crucial in the execution of this build.

Below is the build used from time to time by Liquid`Nazgul. Other slight variations are possible and sometimes better, depending on several variables such as match-up, the opponent's strategy etc.

Proper execution requires a substantial amount of micromanagement. The primary mechanic is using Blink. The general rule: If a Stalker loses shields, then blink behind the rest of the Stalkers. In addition, to the general rule, you will always want to have your army up against a wall to avoid being surrounded by Zerglings. When staging your Stalkers outside the Zerg's expansion, it is important to keep track of the Spine Crawler placement. If there are is an undefended area, move the Stalkers to that area and attempt to move toward the back of the mineral line of the expansion. This will force the Zerg player to Uproot the Spine Crawlers for readjustment. When this happens, and if safe, attempt to destroy the uprooted Spine Crawlers while keeping as many Stalkers alive as possible. Your Stalkers should always be attacking a structure or units while minimizing the amount of damage taken. If some Stalkers can attack the Hatchery, then they should attack the Hatchery without taking damage, even if only a few Stalkers are dealing damage. The rest should be moving into a favorable position to maximize the damage output.

The entire purpose of the Blink Stalker Push is to take advantage of the fast expanding Zerg. If properly executed, the Zerg will have lost the expansion Hatchery and ultimately the game due to the major setback.

If properly executed, the game should be over, but there should always be a secondary plan as listed:

If your army has been beaten and you failed to do significant damage to the Zerg economy, then you are behind. Consider the following:

This build is very flexible when it comes to maps, although, there are a few exceptions.

Steppes of War is typically a more aggressive map and a fast expansions are rare.

Scrap Station's natural expansion is tucked away past a choke point where your Stalkers are susceptible to a Zergling surround.