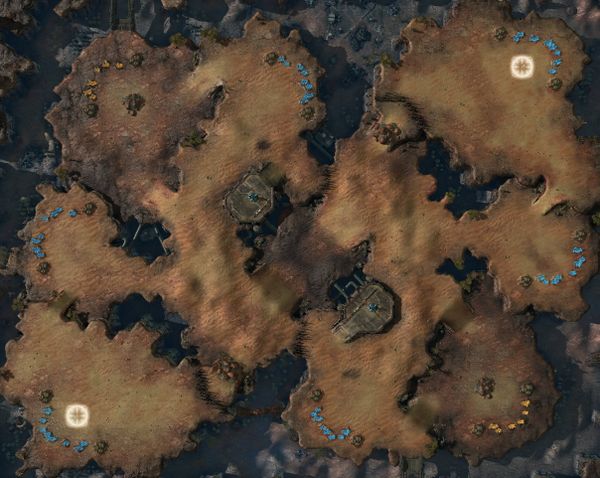 Blistering Sands is one of the original maps that came with the Wings of Liberty beta. It was showcased earlier in the second Blizzard Battlereport between Matt Cooper (Z) and David Kim (T). The map was removed from official Ladder play during season 1, on February 25, 2011, as well as most popular competitions. The Novice version is still used in Practice League.

The starting bases (located in the top right and bottom left) each have a back door that is guarded by destructible rocks. In an unconventional twist, the back door is the more direct avenue of attack in terms of distance. Each base has one natural expansion. Two observatories are key contributors to map control and scouting, as they each grant vision over major avenues between the two bases. Each sits on high ground with a ramp pointing toward one of the two bases, making it easier for that base to defend the observatory. The expansions in the top left and bottom right corners contain high-yield minerals, making them highly attractive locations. However, destructible rocks block the townhall spot, making it risky to expend the time and resources needed to control them.

Commentary from the design team[edit]

Each main features a "back-door" entrance ramp that is guarded by destructible rocks and a wall of vision-blocking grass. It is typically a good idea to place something behind the grass (supply depot, pylon, overlord) to spot if the enemy is trying to break in.

A Pylon placed at the base of the Destructible Rocks will put power onto the high ground, meaning that units can be warped into the main in a 3 Warpgate Rush without a pylon actually being placed there.