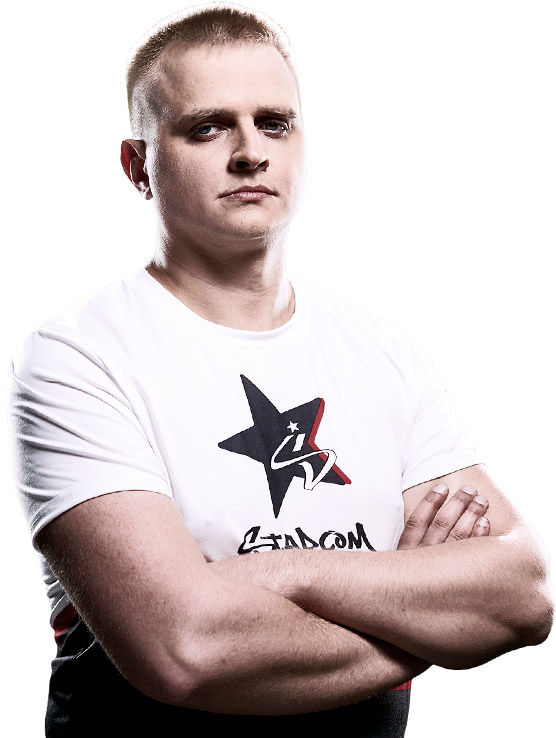 
He is most known for his #3 place in the 2008 Razer TSL. As with many ex-Brood War players, his play style is macro-oriented.

Seen by many as the best Russian Terran StarCraft player who gained many fans due to his entertaining and aggressive TvP style. In the short time he has been in the foreign StarCraft scene he managed to win the Russian WCG qualifier in 2009 and DreamHack Winter in 2009. He became famous after his third place at the Teamliquid Starleague when he was considered to be an underdog. He and Team Empire parted ways on July 16, 2013.[1]

Brat_OK played the StarCraft II beta very competitively and has been one of the highest ranked players on the Platinum divisions. He participated in both SC2TV.ru invitational tournaments. In the second one, he placed second. He has been invited to the TeamLiquid SC2 Invitational 1.

Brat_OK has had fairly substantial success with smaller European weekly tournaments with his first win after launch being the Go4SC2 Cup #28.

Much like his performances in Brood War, Brat_OK is largely considered one of the best Russian SC2 players which has led to invitations to large tournaments. The first of these invitations was as one of the 10 invitees to the IEM Season V - Global Challenge Cologne, the first major live StarCraft event in Europe, he was refused a visa due to a date mixup.[2][3] Subsequent invitations to events such as the Swedish DreamHack Tournament have also been turned down because of visa issues. His inability to participate has stemmed the possibility of numerous major results. Consequently, his first substantial tournament result would be in competing in the Russian tournament held by Beeline, an internet service provider, with a 1st place prize of 500,000 rubles (approximately $10,000 US after tax) along with additional computers and free internet. He would take this tournament without dropping a single set.[4]

Brat_OK managed to qualify for the Blizzcon 2011 tournament where he would play NesTea in the first round and lose, however he would be able to take one game off of him. In the lower bracket, he would beat Loner 2-1 before falling to DIMAGA in the following round. On July 11, 2012, Brat_OK left FXOpen e-Sports and joined Team Empire.[5]

After being knocked out of the NASL Season 1 Playoff Bracket by AcE, Brat_OK would return in NASL Season 2 and finish the regular season with a 5-2 record. Putting him the top of his division and qualifying him for the Grand Finals. In the Grand Finals he had a surprise first round 3-2 victory against DIMAGA, but then lost quickly to Sen in the following round 3-1.