Broodling (Legacy of the Void)

This article covers the current multiplayer version of this unit. For another version see Broodling (Wings of Liberty and Heart of the Swarm). 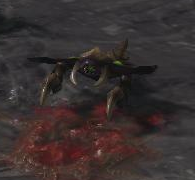 The Broodling is a small Zerg unit that is spawned on death of most Zerg buildings and whenever Brood Lords attack. It is similar to a slightly weaker Zergling, but has a limited lifetime of 5.71 seconds, after which it will die regardless of health.

Most Zerg buildings produce six Broodlings on death. The exceptions are Hatcheries, Lairs, and Hives, which produce nine, and Spine Crawlers, Spore Crawlers, and Extractors, which do not produce any Broodlings. Brood Lords attack by launching Broodlings at their targets, spawning one Broodling per attack. Note that if a Brood Lord does not attack for some time, it will attack twice on its first volley afterwards.

The Broodling profits from both Melee Attacks and Ground Carapace upgrades.

The Broodling can be used against the Protoss Zealot/Stalker/Colossi Death Ball much as it is used against the Terran Bio Ball, scrambling units movement and causing the AI to target the Broodlings over higher damage ranged units. This is much less effective after the Protoss have researched the Blink upgrade as they can blink their Stalker directly underneath the slow moving Broodlord and easily snipe it, removing the stream of Broodlings.

When spawned from its creator, the Brood Lord, it creates a unit that blocks the "Terran Ball" and distracts/scrambles the AI of the attacking Terran, making it much harder to run in back to kill the Broodlords. Broodlings also cause the Tanks in the army to splash them and whatever the Broodlings are attacking, making them very annoying for a heavy Tank army to take on.

With the predominance of Roach/Hydralisk and Roach/Infestor compositions, the Broodling, when created from a Brood Lord, is able to scramble the movement of the Roaches and thus disallowing the slow Hydralisks from hitting Brood Lords.