Bunker (Legacy of the Void) 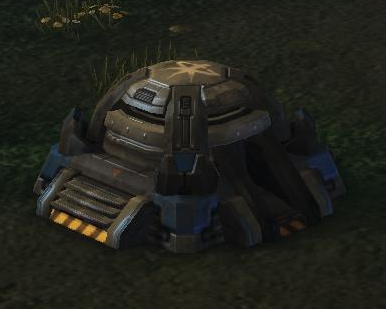 The Bunker is a Terran static defense building that is very useful for protecting infantry units and Walling Off. The Bunker can be repaired by SCVs. The Bunker's Salvage ability makes Bunkers a cost-effective option for panic defense as they can be sold for a 75% refund when danger has passed.

Unlike other static defense buildings, the Bunker does no damage on its own. Instead, Terran infantry units are loaded into it, giving them +1 range and protection from enemy attacks. These units will do the same damage as if outside the Bunker. Once Stimpack has been researched, it can be activated for loaded Marines & Marauders by selecting the Bunker.

Bunkers can be used in similar ways to their Brood War counterpart. They can be used offensively for a Bunker Rush or as part of builds like the 2-Rax Rush or a Reaper-opening. In Wings of Liberty, the Bunker was the repeated object of Balance Updates, when the Two-Rax Proxy Rush was first made popular.