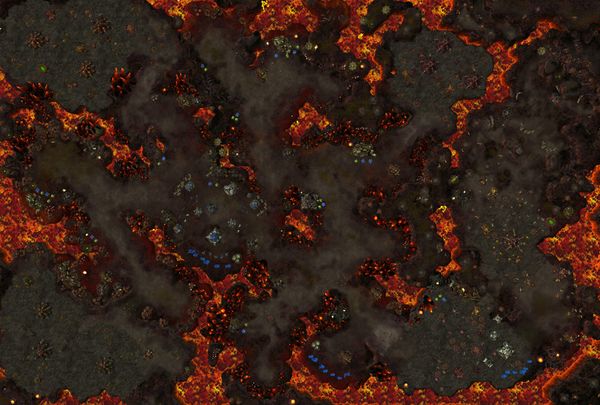 Gates of Hell is the first of the Valerian missions, and you can't return to do missions you've missed after starting this one, but you can replay missions you've finished through the Archive. Raynor and Valerian launch their assault on Char, but it's extremely disorganized and chaotic thanks to a Zerg surprise attack.

You will start this mission with a base in the middle of the map, surrounded on all sides by the Zerg. You'll have a good starting defense force, but you'll want to bolster your forces. Reposition your Siege Tanks closer to the Bunkers, as they're a bit too far back to be truly effective. Early in the mission, the Zerg won't be sending too many units to attack you, just some Zerglings. This will give you ample time to build up. You'll want to build up a sizable Infantry force of Marine/Marauder/Medic. If you got either Ghosts or Specters, build a few as well, since you'll be seeing some Banelings later in the mission, and either Snipe or Mind Blast works wonders on them. Also be sure to incorporate some Mercenaries in your mix. You might also want to keep some Vikings and Banshees handy as well, but there are quite a few Spore Colonies on the map, so watch out for those. You also don't have a lot of gas available to you in this mission, so try to be a bit more conservative with gas heavy units.

Slowly build up your economy and forces, and make sure you start upgrades from your Engineering Bay. You might also want to get an Armory and get a Vehicle upgrade for your Siege Tanks. Don't build a Factory or Starport if you're going for an Infantry army - they'll come for free later if you rescue them, which should be relatively easy as they drop close to your base. Make sure that you rescue all of the early drop pods, as they'll easily bolster your forces.

As you grow your army, make sure that you don't neglect your defenses at home, as the Zerg will be launching attacks against your main base from both sides. You want to bolster your defenses on the right side of your base though, as a lot of the early drop pods will come on the left side of your base, so your main Infantry ball will likely intercept a lot of Zerg attacks from that side. Be aware that the drop pods will always have Zerg ground forces guarding them, forces which will spontaneously spawn and which range in size and power.

Don't be afraid to start pushing into more Zerg territory when you've started to grow your army. You should be able to easily take down a lot of the Zerg buildings with a sizable enough Infantry ball. Be on the lookout for Banelings though, as those will inflict serious damage on your Infantry. If you're attacking the Zerg base though, be sure you break off your attack to save any Dominion troops that arrive in drop pods. They're essentially free units on a map where resources are rather scarce. There will be a lot of resource containers spread around the map for you to pick up though, so if you start to run low on resources at your main base, don't worry too much about that. You should have enough resources to see you through the mission.

The last 4 drop pods fall 2 at a time. The 7th pods contains Banshees/Hellions, the 8th pod contains Vikings, the 9th pod contains Battlecruisers, and the 10th pod contains Thors. You may want to build a Medivac to rescue and lift any units you can out of the drop pod you can't reach in time with your ground units. If you're especially daring, you can try to split your Infantry ball into two groups to save both drop pods, but this will probably result in more casualties if you're not careful. You can cheese the 7th or 8th pod by taking advantage of the spontaneously-spawning nature of the guarding Zerg ground troops by laying down a thick field of spider mines where they will spawn, and sending your infantry ball to take care of the guards at the other spawn point. For the last pair of drop pods, send your infantry ball to the Battlecruiser pod, and send some Banshees to the Thor pod; the Thor pod is guarded by Ultralisks and Roaches, neither of which can hit air units.

After you've gathered 100 units, you'll get a new objective - to destroy the 3 Nydus Worms. Don't worry about attacks on the downed Battlecruiser, as they'll be able to handle essentially anything that comes their way, so you don't need to rush to save them. You want to wipe out all of the Zerg on the left side of the map before you assault the Nydus Worms, so you don't have to deal with attacks on that side save for a few Zerglings that somehow always appear. Just assign a few Marines and a Medic to the left side and you'll be fine. When you move out on the right side of the map, there is a path that leads upward to another Zerg base, and there's a path that leads straight to the Nydus Worms. You don't have to take down the Northern Zerg base. You can if you like. If you want to head straight for the Nydus Worms, keep a defense force at home, since the Zerg base will launch attacks against you.

The final push to the Nydus Worms will be a little difficult, but nothing unmanageable by careful micro. Be sure to immediately snipe any Banelings and Ultralisks that you see, and don't get caught up on the Broodlords. Move up to snipe them with your Marines to avoid taking unnecessary damage. Alternatively, push with 8+ Tanks and 6+ Vikings; the Tanks will melt away any ground units, and the Vikings will take care of the Broodlords and the Mutas. When you approach the Nydus Worms, target fire them to avoid any more Zerg reinforcements from coming out. If you encounter difficulty in the final push, abandon your base and send your defense units to join the attack. When you destroy all three, the mission will end.

Alternative Solution (for the second Part of the Mission)[edit]

You need to bring one or more Ghost (Spectre) Units to General Warfields Camp, prepare 4 Nukes and nuke the Nydus Worms. With the Drop Pod ability this way is very simple.

A pair of mind control towers on both sides of your base, combined with the provided bunkers, siege tanks, and perhaps an extra missile turret or two, can take care of base defense. Remember that Medivacs can heal Zerg air units. If the mind control tower's energy is full, mind controlling weaker units like hydralisks or roaches (as opposed to mutalisks, brood lords, and ultralisks) is okay as these are still free units; just mix them in casually with the marines or leave them by your base for defense. Mind-controlled ultralisks are extremely useful in a push towards the Nydus Worms.

To the North East of your starting base (top-center of map, West of General Warfield's crash site) is a Zerg base that does not appear to send attacks to your base. It can be left alone entirely (unless you plan on going around towards the crash site with air units, approaching it from the North instead) and it is relatively well fortified compared to the two Western bases that attack the left side of your base and the two Hives there will constantly produce Ultralisks. There is a ramp that leads into it where one of the Spore Cannons are and right below that ramp is a patch of ground that isn't covered in creep. If you have Hive Mind Emulators, you can build 1-2 of them right outside at the bottom of the ramp, defend them with 1-2 Missile Turrets (against Mutalisks that come out), and then lure Ultralisks out to capture. You can easily get up to 20+ Ultralisks this way if you're patient and then just use them to attack the Nydus Worms without using any of your own units. The only threat will be the few Broodlords near them but with enough Ultralisks, you can just ignore them and rush straight for the Nydus Worms.

Given the limited resources (gas in particular), you should try not to lose any Marauders and Medics while attempting rescues and try to save high value units such as the two Battlecruisers (especially if you plan on using an air force), the two Siege Tanks, the four Goliaths, the three Banshees, etc. The Defense Matrix ability on Battlecruisers is quite useful here if you have it (and if you have the Cellular Reactor research upgrade) as you can just activate the Defense Matrix as soon as you rescue them to defend against the Mutalisks and Corruptors that attack them (and then Yamato the Corruptors at the same time).

If you don't have Hive Mind Emulators, getting the Hell's Angels mercenaries for base defense as soon as possible is recommended since the enemy will send a few Broodlords your way during the Rescue part of the mission and they'll be a major nuisance since they outrange all your defensive structures. If you do have Hive Mind Emulators, you should try to place one above your top-left bunker, as positioned just right, you should be able to capture any attacking Brood Lords (2 on Hard, 3 on Brutal, appearing immediately after the Banshee and Viking pods drop). You can then hold these Broodlords above your base (above the Mercenary Camp) and they'll be surprisingly helpful in defending your base from attacks from the north.

The achievement only requires you to rescue them, not to keep them alive. Therefore, if you build a Medivac, you can easily "rescue" all the Dominion Drop-Pods before they get overrun by the Zerg. You can also save some of the units by loading them into the Medivac. The majority of them are easily savable with a ground army though, it's just when they start coming down in groups of 2 that it becomes more difficult to save them all.

Another alternative for the achievement is to drop a MULE or Barracks Pod right on top of them which gives you control and thus fulfills the "rescuing" requirement. However, it is unlikely that they can be saved to bolster your army because the Zerg forces will attack and destroy them right away. Therefore, it's better to do this only in an emergency, and try to save them or use a Medivac or other Transport unit.

If you avoid this mission for as long as possible, you can complete 23 missions before heading to Char. You should have earned up to 2,280,000 credits and both Protoss and Zerg research should be completed.