< Campaign
[e][h]Wings of Liberty
Ghost of a Chance 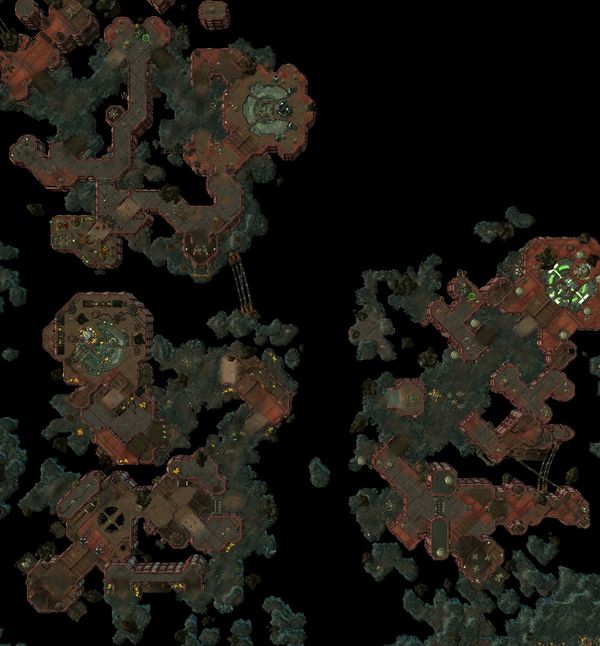 Ghost of a Chance can be played in place of Breakout after completing Welcome to the Jungle and 8 other missions. Raynor has chosen to side with Nova in eliminating the Spectre threat once and for all. They move to destroy Tosh's Spectre training camp.

This is essentially a stealth mission separated into three parts. Even though you do get some reinforcements, they're mostly useless, save for some key units like Siege Tanks. Units that you get in each section don't carry over into the next one.

In the first section, you start off with 8 Marines, 2 Medics, and Nova. Nova is separated from the Marines by terrain, but you'll regroup together soon. Move your Marines up, and take down any resistance that you meet up with. You shouldn't have any trouble dealing with the units that you encounter. At the same time, move Nova up as well, though don't advance past the Missile Turret on the high ground until you've cleared it with your Marines. Once the Turret is down, Nova can take care of the remaining infantry units on her side, then take down the Gate Control.

Be careful when advancing up the next high ground with Nova, as there's a turret at the top of it. Use Nova to pick off and deal as much damage as you can to the units below the high ground, then when they're softened up, advance with your Marines and destroy any remaining troops. After advancing a bit further, you'll be instructed to Dominate a Siege Tank. Do so, and it'll pick off most of the Marines. Kill the Raven, and kill any other infantry in the area. There are no other turrets in this part of the map, so Nova is essentially invincible. You can use your Marines as well. There are two Spectres up ahead, which you'll want to kill.

When you get to the Jorium Stockpile, you'll find that it's guarded by a Battlecruiser, Hel's Angel, and Jackson's Revenge. There are also a few Turrets nearby, so you can't use Nova to kill them all. Bring up the Siege Tank you dominated earlier, and kill the Hell's Angel. If you lost it, use your Marines to destroy it. If you attract the attention of the two Battlecruisers, wait until the Siege Tank you dominated is destroyed, then Dominate the Jackson's Revenge. Yamato the Turret, and destroy the other Battlecruiser with Nova's aid. Then proceed to destroy the Jorium Stockpile.

You'll soon appear in the next area of the map, with just Nova. When you advance forward, a Dominion patrol will come to check you out, with a Raven flying with them. Dominate the Raven, then the Dominion patrol will have no detection, thus enabling you to kill them all easily. Advance forward with Nova as there's no detection in this area, and destroy all enemy units in the area. This will allow your reinforcements to land, which turns out to be 8 Reapers, 2 Siege Tanks, and a Raven.

Move Nova up first, and advance up the high ground that you see. On the top you'll see a Banshee and a Siege Tank. Take out the Siege Tank first, then bring your Ravens with Nova, and take out the Banshee as well. Bring your Siege Tanks to the top of the high ground, and destroy everything below. Once you destroy the Turret, you can use Nova to pick off the survivors.

Be careful when advancing any further, as there's detection on the high ground. Keep your Siege Tanks to the right side, and use your Ravens for sight. Pick off all Missile Turrets in the area, and move Nova forward to kill the Spectre. If you accidentally move any units aside from Nova into the sight range of the Specter, it will call down a Nuke, so you'll want to back your units away.

In the final part of the mission, you start off with Nova, 4 Vikings, and 4 Banshees. First move Nova to the northeast, take down the Marines, and Dominate the Siege Tank. Next move Nova down into the low ground area, and you'll see an enemy Siege Tank. Destroy it, then move your Siege Tank to the low ground. Use your air units as spotters, and destroy everything within range on the high ground. Also make sure to pick off the patrolling Raven over the thin strip of land to the east. You'll want to move Nova to the Northern area, as there's a Nuke Silo there you'll want to take control of. Be careful with her, and use your Siege Tank to destroy anything you can, and use your air units as spotters. Once the Nuke is secured, move Nova down the thin strip of land to the South. You'll soon find your way blocked by a Raven, 4 War Pigs, and 2 Mercenary Marauders. Snipe what you can, and use hit and run tactics darting in and out of the Raven's detector range to pick off the rest. Move further down, and destroy the debris. This will unleash an Ultralisk (which you can dominate), who will move up and destroy a bunch of Marines and a few Turrets for you. Kill it afterward. There is a Thor in this area that you might want to take control of. Kill the Siege Tank you dominated earlier, and instead take possession of the Thor. Use it and Nova to destroy units from the high ground where they can't see you. From here, you can either move to take down the 2 Spectres, or you can just Nuke the Psi-Indoctrinator. With the Thor and your air units, you can basically attack-move the two Spectres and destroy them easily, but watch out for the Nukes that they will call down.

Deals 125 damage to a biological unit. Should be used against Spectres, and any high health Infantry units like Marauders.

Takes control of an enemy unit until it is destroyed or Nova releases it. It's essentially Mind control, though Nova can only dominate one unit at a time. Use it on high value targets like Ravens, Siege Tanks, etc.

There are 10 Spectres in total, but there are a different number in each section. 2 are in the first, 3 in the second, and 5 in the last. They're also marked on your map for you. Many of them are directly in your path, and so should be taken down for convenience. However, there are a few which are off the beaten path. The two Spectres in the first section are right next to each other, and so can be taken down easily with Snipe. The second section has three Spectres, one of which will be killed when you call down the Nuke, and another which is on the path to the mission objective. There is one Spectre on an island to the west though. You should use the Raven's Hunter Seeker Missile or two Auto-Turrets (which are more cost-effective in terms of energy) to take it out, or you can use your Reapers to kill it. In the final section, 3 Spectres are scattered around the map, and 2 Spectres will be killed by the Nuke. You shouldn't have any trouble finding and killing them.

Ghost of a Chance
Dominate Tricks

This shouldn't be hard at all. If you're following the guide, then your dominated Siege Tanks should have well over 15 kills.

This does not include the Missile Turrets littered through each area, feel free to ignore the inconveniently placed ones. You are also allowed to keep a dominated unit in the final part of the mission. You get this achievement after destroying the Psi-Indoctrinator.

If you avoid this mission for as long as possible, you can complete 22 missions before heading to New Folsom. You should have earned up to 2,105,000 credits and both Protoss and Zerg research should be completed.