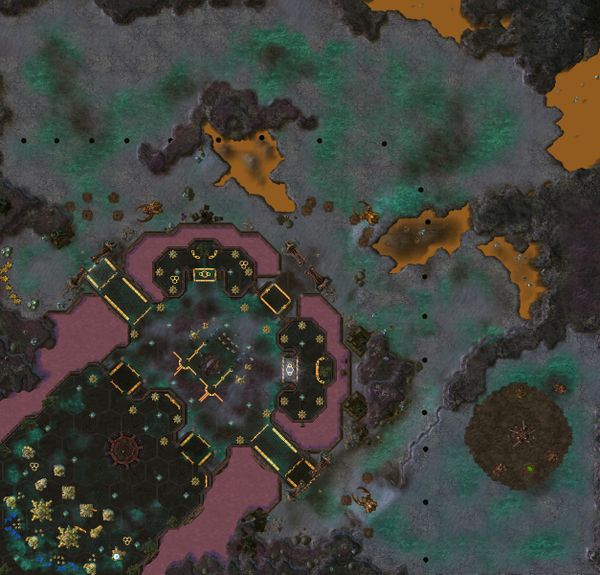 In Utter Darkness is the final mission in the Zeratul campaign. Zeratul has added a vision of the future into the crystal, which shows Raynor what happens should Kerrigan die.

This mission is a defense mission, where you're expected to defend your base until you get overrun. You start off with a well established base, but you should build more Probes too, as you'll want the money. Your primary unit composition in this mission should consist of primarily Colossi and Immortals, but you'll want Stalkers for anti-air defense, and you'll also end up getting a lot of Zealots too, considering you should have an abundance of minerals throughout this mission.

As you start out, be sure to start researching attack upgrades for both ground and air, as you'll need them later. Max out attack, then start researching armor. You should initially keep your army in one big group, but as the mission progresses, you'll want to split your army into two groups, as the enemy will begin to attack from two sides at once. You'll also want to keep your air units that you both build and receive in a separate hotkey, to deal with Mutalisks and Broodlords.

Take the Gold expansion as fast as possible (in the first seconds), this will allow you to produce a lot at the beginning. When the attacks spawn at the same time on different lanes, don't spend too much on trying to defend it. Try to anticipate this moment not to lose all the probes.

The key to this mission is to have the most cost-efficient army possible; so that you kill the most units sustaining the least losses. At 5 points in the mission, you'll be granted more units and you'll also receive some hero units. Each wave of air units is accompanied by ground units. You'll first receive Urun and his Phoenix wingmen. Next you'll receive Mohandar and his Void Ray wingmen. Then you'll receive Selendis and her Carrier fleet. Finally, you'll receive Artanis in a Mothership, and he'll come with just ground units. Be sure to add all the air units to the separate hotkey. Be sure to use the abilities of the Phoenixes and the Mothership. You'll want to levitate Hybrids to prevent them from killing you.

At the beginning, the Zerg will not send much detection, so Dark Templar are your best friend. Mass them up and spend your excess minerals on cannons around the archives. Upgrade both air and ground attack, and build up 5-7 Gateways. The cannons at the perimeter of your base will inevitably fall; do not mindlessly waste units trying to protect them.

As soon as you receive the fleet of Void Rays, build a third Stargate and mass Void Rays. Split the excess minerals between gateway units and cannons. The Zerg's unit composition counters ground strongly, but sends very few hydras, so air units are the best way to go. Having a ground composition will get overrun after about 2000 kills.

At various points during the mission, Nydus Worms will pop up in your base. Use your air units to snipe them, while your ground units clean up any units that emerge from the Nydus Worms.

After Carriers arrive, you can start building them as well. Both Void Rays and Carriers are good choices at this point; its completely up to personal preference.

There will be a large attack about 30 seconds before the archives submerges. In my experience, this is a good time to pull to the high ground, because the archives will be safe. This might not be true all the time, so if you're nervous, make a save file when the timer is at about 1:30.

The mission continues after you've killed 1500 units, and you can either throw away all your units at this point, or continue to hold your position. When you get around 3400 kills though (on Brutal at least), the enemy will just start to swarm you like crazy. Just watch your units die, and the mission will end.

An effective way to complete this mission is to simply wall yourself in completely with gateways/warpgates. Once you have accomplished this, mass nothing besides colossus and phoenix. The colossi should take care of any of the zerg units as they try to get through your wall. You can either keep the colossi together and move them to each path as it is attacked or divide up your colossi equally between the three.

The phoenix can lift up the hybrid units so they can be removed from the battle and eliminated last. You can then use the voidrays that are given to eliminate them, or just use the phoenix themselves if you have enough.

There should be very little problem getting the bonus objectives with this strategy. Use the zealots and other ground units to take care of the nydus worms during the mission. Do not forget to rebuild any holes in your gateway wall during the down time, and do not be afraid to kill off a damaged building yourself to replace it with a fresh one.

Build extra cannons at the cliff of your base throughout the mission for when the zerg finally overrun your position. Pull all of your forces back to your cannons and hold out as best you can.

Build dark templars, enough to wall the 2 ramps from your main base. Once you've walled it off, move all your forces behind the dark templars. It's important to constantly have observers out so you will be aware of incoming attack waves. Meanwhile, you need to pump out phoenixes and as many cannon as possible in your base to tackle against nydus worms. You'll need plenty of phoenix because the dark templars will do fine for the first few waves. However once overseers starts coming out, you must take down the overseers to prevent them detecting dark templars. If you lose observers on the field, keep producing them. It's crucial you know where the overseers are. You would probably want to pump out a few immortals and colossi. But make sure your units don't get too close to the dark templar wall or else the splash from ultralisks attack will break the wall. The only trouble you should face is dealing with the nydus worms, overseers and air units. If you want the bonus achievement, create your dark templar wall but pump out some colossi to hold long enough before moving behind the dark templars.

It is very possible (even easier, for some, as the only micro you really need is shooting down overseers) to win with this Dark Templar strat in Brutal:

Before the Hero Void Ray fleet arrives, build Phoenixes to deal with air, after that, mass Void rays with upgrades. Keep producing them if they are lost and use all excess minerals on cannons. Cover the top part of your base with cannons so you don't have to worry about Nydus worms, they will also help you get kills later once you're truly over-run. When the hero Mothership arrives, keep all your Void rays under that, and target fire any detection first, then proceed to kill everything else. On normal difficulty the computer will send a maximum of 2-3 detectors per wave and you can quickly kill everything with minimal losses, use every last mineral and cover the rest of the low ground in cannons. You will easily be able to get both kill achievements if you micro your Void rays correctly. Blocking off one entrance with cannons can help and delay the Zerg late game once they start to continuously attack.

By the end of the mission, chances are you will just have a mass of Carriers. For maximum effectiveness, it is very important you remember to replace destroyed interceptors. You can either do this manually, or set it to auto-cast (recommended). It is very important to note that interceptors are not free; as a matter of fact, it will put a big strain on your mineral economy. At the end of the mission, don't mindlessly build cannons because you have excess minerals. If you run out of minerals, your carriers will quickly degenerate into empty hunks of flying metal. It is recommended to keep approximately 2000 to 3000 minerals just for renewing carrier interceptors.

The Mothership will be available to build from the Nexus by the time Artanis arrives with his Mothership. Note that you cannot build an additional Mothership as the maximum number you can build is one. In case you loose Artanis, you'll be able to produce another Mothership, although a Mothership costs a lot of minerals and gas, so it is best to keep Artanis until the near completion of the mission.

Note on Difficulty Level and Achievements[edit]

It may be of interest to know that while this mission is considered tough in general, the disparity in difficulty (between Hard and Brutal, at least) is not really that significant. The main noticeable difference seems to be in the number of enemy units sent at you each wave, which means it becomes easier to get all achievements in one go if you simply play on Brutal mode instead of Hard mode, i.e., you are able to get more kills in the same amount of time/waves in Brutal mode compared to Hard mode with no variation in strategy used. When the enemy attempts to end the mission (at the 39-40 minute mark, 69th wave) by sending masses of Corrupters at you, you will already have at least 3400 kills compared to 2500-2800 kills on Hard.

The Protoss archives is the yellow building on the minimap near where all your units start in the beginning of the mission. If you want to protect it, then you can't pull back to the high ground for the first 25 minutes of the mission. Following the main mission guide should suffice.

Brutal Walkthrough With All Achievements