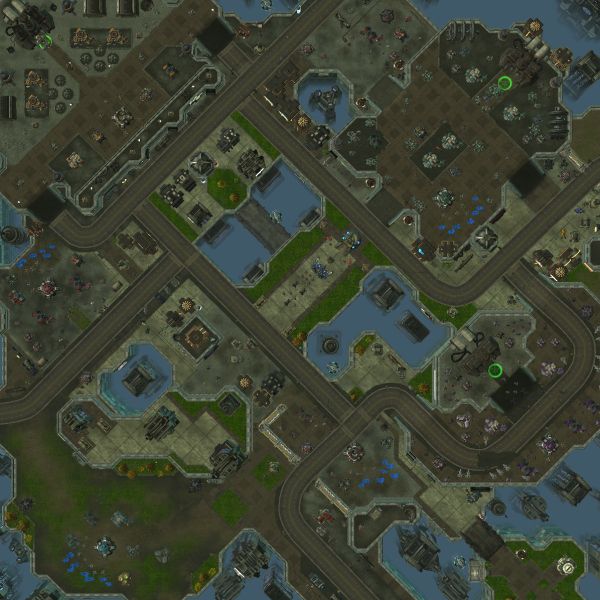 Media Blitz is the 4th mission in the Rebellion mission line. With the Odin stolen, Raynor, Findlay, and Horner move to broadcast the media message throughout the Dominion space.

You can build Thors starting from this mission.

You start out as the Odin in the middle of the map, surrounded by Dominion forces, who will turn against you once you fire a shot. You should use Barrage on the large clump of Infantry units, as those could end up dealing a lot of damage against the Odin, which you don't want.

After you deal with the infantry units, you have a choice of three bases to take out - the left, top, and right bases. The left base contains air units, the top base contains Factory units, and the right base contains Infantry units. You don't want to take down the Infantry base, as that's an absurdly easy base to destroy with the Odin later. Instead, you should destroy either the Starport base or the Factory base. Both are good options. If you have Banshees, taking out the Starports will allow them to decimate any ground units uncontested. If not, you should probably take down the Factory base because Diamondbacks and Siege Tanks are more difficult to deal with than air units.

Be careful with the Odin, as it can die if you don't control it well. Be sure to get up close to Tanks in Siege mode, so they can't fire back when you hit them. You'll want to Barrage the clump of Mercenary units at the top area of the base too. You don't need to destroy every building in the base - only the production structures. If you're quick about it, you can also rush over to the Starport base and Barrage 2 Starports before the timer runs out. Don't worry about running the Odin back to base. It'll appear in your base once the timer runs out.

Once the Surprise Attack is over, you'll want to start building up your economy and start massing up units. Barracks units are basically useless on this mission, as they're too weak to properly stand up to the firepower they'll be exposed to. You'll want to start pumping primarily Thors, but mix in some Tanks. You only need maybe 3 or 4 Tanks maximum. Mix in some Science Vessels if you have them. If you don't have them, you'll want to bring SCVs with you on your attack, and pull damaged units back for repairs.

While you build up your units, you'll be attacked by the two bases that you left alive. Make sure you wait until after these two attacks have been completely destroyed to move out. You'll want to move towards the Starport base first (or if you destroyed it in the Surprise Attack, the Factory base). The Infantry base is honestly no real threat to you, as any units they send can be easily fended off by a few Thors and Siege Tanks. If you want to feel safer, you can build a Medivac so you can transport the Odin back to base quickly if you somehow get overwhelmed.

When you start uploading information to a broadcast tower, you'll be attacked by the two unit types that aren't in the base. In other words, if you're uploading to the Broadcast Tower in the Starport base, you'll be attacked by Infantry and Factory units, and so on and so forth. You'll want your Tanks and the Odin to handle all the Infantry and Factory units that come to attack your army, while the Thors handle any air units.

This strategy allows you to complete this mission in 20 minutes on Brutal, and get all three achievements. You need both Spectre researches. Spectres should be cloaked as soon as they are produced. Timing is crucial on this strategy, so follow closely:

During the surprise attack, destroy the east (right) half of the center base, getting rid of 2 Missile Turrets. Barrage the Command Center. This will allow your Spectres to come in through the ramp later. This should take just under 2 minutes. Then go and destroy the west base. Your main objective is to take out all the Starports and the Command Center (barrage these) and the two Turrets near the south side of the base. Try to take out the Raven too, but this is not necessary. Try to avoid provoking the enemy units; on a good run you will only get attacked by 2-3 Vikings and 2-3 Banshees. Destroy the Barracks if you want the 2nd achievement.

After the surprise attack, repair your Odin, and build some Siege Tanks and a Medic. Defend against the first attack, then immediately afterwards, take out the small base on the east. Start building Shadow Ops and Spectres. When you have 2 Shadow Ops and 4 Spectres, proceed to attack the small base on the west, leaving your Siege Tanks at home. After the attack, retreat back to your base. You don't need the extra resources for this strategy. Leave your non-Spectre units at home to defend, which they will do fine without any further heavy intervention from you. You only need maybe 2-3 more Siege Tanks on top of your starting units; spend the rest of your resources on Spectres and Nukes.

Build up to 6 Shadow Ops, and keep them filled with nukes. When both small bases are cleared, send 1 Spectre to the east base (group 9), and 3 Spectres (group 7) to the west tower. If you didn't kill the Raven earlier, you'll need to Lash it. After the way is clear, sit group 7 on top of the beacon and wait. Ignore the enemies that come, they can't affect you. Now, send 2 Spectres (group 8) to the right ramp of the north base. Meanwhile, group 9 should have arrived at the east base. Use Scan to make visible the Turret on top of the west cliff, and nuke it. (This allows you to later enter the base and nuke the other Turrets.)

When group 7 is at around 55% upload; a Raven will appear soon. Drop back and immediately nuke the beacon. Look for the Raven, and IMMEDIATELY Psionic Lash it. (You may need to save-reload if you're unlucky.) That's the first tower done; around this time you can send a Siege Tank to go collect the Secret Documents (you need to Attack-Move to hit the building).

Use group 8 to nuke the Turret at the north side of the north base, just behind the beacon. This may take two nukes. Meanwhile, use group 9 to nuke all the Turrets in the east base, and bring a couple more Spectres into the group. When group 8 is on 150 energy, run them up to the beacon. Leave one Spectre there, and move one further north, to the edge. At around 40% upload, a Raven will appear around here; Lash it. That's the second tower done.

By now, you should have mostly cleared the east base with nukes, and the Siege Tank should have finished destroying the building. Collect the documents, then send 1 Spectre up to the beacon. Leave the other Spectres from group 9 on the other side of the road, which should now be clear of buildings. Enemy Medivacs will appear, and at around 40%, a Raven will appear too. If all goes well, the previously-dropped enemies should have already run off to the beacon, and be nowhere nearby, so just Lash it. Third tower done!

The key here is to do all 3 towers nearly in parallel. The only actions you, as the player, have to do, are nuking and lashing the Raven. Most of the time, the Spectres inside a base will be waiting for something - either a nuke to drop, or upload progress to trigger the Raven. So you can multitask and do actions in one base, whilst another base waits.

If you rush Odin to each base and take out the Command Centers, the computer doesn't later rebuild them. The mission then becomes a cakewalk.

For Brutal mode, you can get away with just a few Thors and lots of missile turrets. During the special attack:

When you have control of your base:

Use SCVs and mules to repair. You should have plenty of them all the time. You really don't need that many units as the turrets should destroy all drops during transmissions.

You can access a secret mission by going to the lower right corner of the map. There is a Science Facility there that can be destroyed. Doing so will yield a document, which will give you access to the secret mission, Piercing the Shroud.

Remember that the time of the surprise attack in the beginning of the mission is counted. So you only have about 15 minutes to get this achievement. On Hard difficulty the enemy does not seem to directly target SCVs, whereas on Brutal they will be targeted.

During the surprise attack, head directly into the Factory base and destroy any siege-mode tanks (by standing close to them, they cannot damage the Odin in return, whereas tank-mode tanks can), the Command Center, and all Factories. With careful micro, enough time should be left to head to the Starport base and destroy its Command Center and all four Starports. This effectively disables both bases from being any sort of threat, and is a good strategy to use even when not trying for this achievement.

After the surprise attack, build a Bunker to the east of your base (put the four Marines in it), and send out the Odin, the initial Thor, and 2 repair SCVs to attack the small base to the north. The Odin will be damaged from the surprise attack, but the SCVs will repair it as it's making the assault. Don't worry about making an expansion, just keep cranking out SCVs (and MULE's if possible) at your main base. While this initial attack force is on route (you can attack-move them, it's a weak base), build a Siege Tank to put at your Bunker, and build a second Factory with Tech Lab. You'll want to build numerous Supply Depots also. After that initial tank, build lots of Thors.

Send the first 2 Thors with 2 more SCVs to join your strike force as they advance into the Starport base. Since you are low on manpower be ready to use Barrage on clustered Factory units that will counter-attack. Head immediately to the Factory base once the Starport base has been completed. By this point 2 more Thors should be ready, so send them with 2 more SCVs to intercept the attack group at the Factory base. You'll want to enter from the northwest entrance and skirt quickly to the back of the base. Use Barrage on infantry clusters.

When the Factory base has finished, you should have 4, maybe 6 more Thors at your main base. Send this group with all of your SCVs, the Siege Tank, and four Marines to the southwest entrance of the infantry base as your team in the Factory base enters the infantry base from the north. Both groups should have an easy time making their way to the center platform. Be sure to get all units onto the top platform as quickly as possible to restrict the enemy's ability to target units and return fire, and let the Odin be the unit that is nearest to the slope so that it will be targeted by the enemy first.

If you have MULEs, you can easily drop them on your Odin and repair it in the field.

If you avoid this mission for as long as possible, you can complete 20 missions before heading to Korhal. You should have earned up to 1,965,000 credits and both Protoss and Zerg research should be completed.