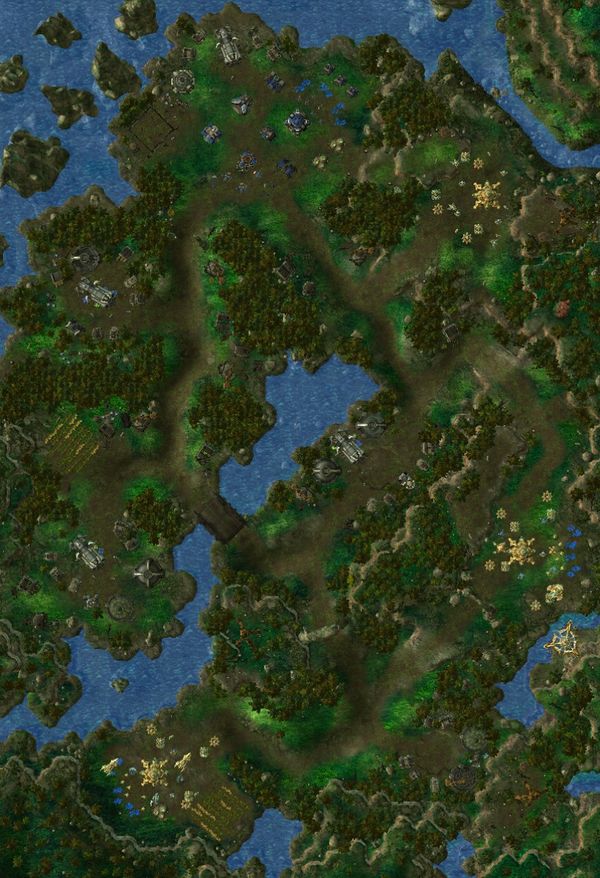 Safe Haven can be played after completing Outbreak and 7 other missions. Dr. Hanson has lost contact with her people that she sent to the planet Haven. Upon investigation, it's discovered that the people have become infested, and the Protoss are in position to destroy the planet. You side with Dr. Hanson, who asks you to stop the Protoss from purifying the infested colonists until she can find a cure for the infestation.

You can build Vikings starting from this mission.

You begin at the top of the map, with a rather well established base. You need to destroy the three Protoss Nexuses first, for which you'll want an army of Marauder/Medic/Marine. Try to keep your Vikings alive, as you'll need them to destroy the Purifier later in the mission.

Start building up your economy, and start pumping out Marauders and Medics. You'll want to focus on your Viking upgrades more than your infantry upgrades, so get an Armory quickly and start on those.

The Protoss will launch 2 attacks on your base in the beginning of the mission. Once you fend those off, you should move out with your army towards the first Protoss Nexus. It shouldn't be too hard to take down, and you'll probably steamroll it with your army. Once that's complete, repair/heal any damage taken, and move out towards the second Nexus. This Nexus is guarded by some Colossus, so you should move in with your Vikings first, and get some hits off on those first. Then move in with your army, and take down the Nexus. Again, it shouldn't be too hard. Around this time, the first Terror Fleet should have arrived, but just take your Marines and your Vikings, and destroy the Carriers. Marines should go in first to take the hits though.

After you've dealt with that, move to take down the final Nexus. Be careful as it's guarded by several Void Rays, as well as a High Templar. You can essentially let all your Marauders die though, as you won't need them anymore. Once the Nexus is down, the Purifier will be open to attack.

The Purifier is basically a Protoss Mothership with much more HP. It's actually fairly easy to take down with Vikings, as they outrange the Purifier. But be careful, it can Vortex your troops. The Purifier will do this only if many of your units are in a small area. So just keep your Vikings split up in small numbers (i.e. two) and behind the Purifier and they should never be hit. The Purifier will eventually go down.

The last stop of the Purifier is basically in your main base. A few Missile Turrets in your base will greatly help to kill the Purifier.

Defend your base entrances with a Bunker between the two entrances. If you have upgraded your Bunker, one will suffice, else you might need two. Make sure to repair it with a SCV when required.

Use the first 3 Vikings to take out the 2 Warp Prisms and the Phoenixes on the left side of the base to the right. Then land your Vikings on the ledge and destroy the Nexus. Make sure to build an Armory and get the damage upgrades. Keep building Vikings. If you need more defense hire mercs. Take about 5-7 Vikings to the bottom right base. Again take out the 2 Warp Prisms on the left side, then kill the Colossus. Land on the ledge and destroy the Nexus. Gather about 10-12 Vikings and head to the bottom base. Lure the Carriers away and kill them (the Void Rays if you can too). Head to the mineral line on the left and land all but 3 Vikings and attack the Nexus. Kill anything that comes including the Phoenixes with your Vikings in flight mode. Take out the Mothership.

Saving the colonists from the doom fleets that attack helps because the colonists leave resources behind. Just kill the fleet with Vikings and land a Viking to pick up the reward. Also at one point a Colossus attacks your base. Take it out with a few Vikings. The best time to attack the Purifier is when it attacks a settlement and is thus static. You will see a progress bar inside its status window indicating the progress and showing you when to retreat.

If you're having trouble completing this mission, Haven's Fall is arguably much easier and provides 3 Protoss research points that can help get valuable upgrades earlier (Protoss points tend to arrive later in the game than Zerg). Completing Haven's Fall prior to undertaking Safe Haven, and purchasing the Mercenary contract for the Hel's Angels and the range upgrade for Vikings from the Armory makes this mission vastly simpler.

Upgraded range makes eliminating the first two Nexuses, the terror fleets, and the Purifier, quite the cakewalk. The Angels are probably the single best merc unit as well, given that they are superior in all stats (including cost) to a standard Viking's.

Another option is to wait to have Banshee. Once you destroy a base Warp Prism, snipe all Nexuses by using Cloak. 2-3 should be enough.

If you have completed Engine of Destruction and thus have the Wraith available in addition to choosing the Science Vessel (Protoss research), this mission becomes easier. Since Wraiths do not have to choose between anti-air and anti-ground, you do not have to worry about whether switching to Assault Mode will lose you some units due to missing a single Zealot. Wraiths are also very quick, moving from Nexus to Nexus is easy (though beware that Science Vessels are far slower than Wraiths). 2-3 Science Vessels combined with 15-20 Wraiths make this mission a cakewalk--focus-fire on Warp Prisms to disable Photon Cannons, cloak and enjoy the carnage. The Purifier is not a detector, so cloaked Wraiths can easily take it down.

Note that the Wraith's anti-ground attack is relatively weak and slow-firing; a critical mass of Wraiths is necessary to complete the mission this way. It is also advisable to purchase Tomahawk Power Cells (+100 starting Wraith energy)--that way the initial batch of Wraiths can run cloaked the entire mission. Ignore the terror fleets to save energy.

Note that you'll only get these Sidequests depending on the number of Outposts the Purifier has destroyed.

The fleet is composed of 2 Carriers. Vikings should be able to take them out easily.

The fleet is composed of 2 Carriers, 2 Void Rays, and a Scout. Again, Vikings should be able to take them out, though you might also want to bring some ground troops to be safe.

The fleet is composed of 3-4 Void Rays and two scouts, Vikings are invaluable.

Complete the bonus objective to obtain this achievement.

You Shall Not Pass
My Precious!

The colonist settlement inside your base counts. Refer to the Quick Guide above for the fastest way.

Rip Them All Down

If you avoid this mission for as long as possible, you can complete 22 missions before heading to Haven. You should have earned up to 2,125,000 credits and both Protoss and Zerg research should be completed.