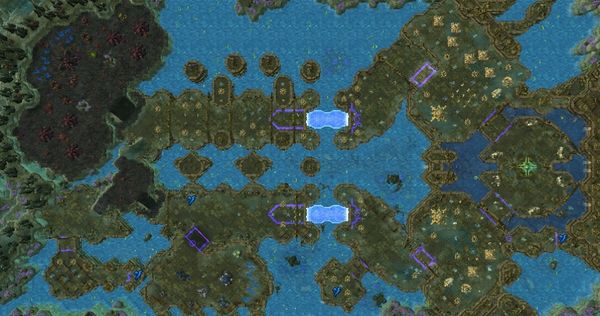 Smash and Grab is one of two missions that you get after finishing Zero Hour. Jim Raynor and Tychus Findlay move to secure another Xel'Naga artifact. However, it's guarded by the Protoss faction called Tal'Darim, and to make matters worse, the Zerg are after it as well. It's a race against time to see who can secure the artifact first.

You have access to the Marauder in this mission, which differs slightly from its multiplayer counterpart: they have 100 HP rather than 125 (until the Kinetic Foam upgrade is purchased at the Armory), and they can't Stimpack.

You start with a small force at the 7 o'clock position of the map. You should start off by building more SCVs and increasing your small force. Players may find it tempting to get their second Barracks right away, but if you are constantly producing SCVs and Supply Depots you will barely be able to afford constant production from your starting Barracks for a while. On Brutal difficulty, the enemy likes to snipe off your Medics first, so be wary of that and try not to get them killed. You'll want an army composed primarily of Marauders and Medics with 8-10 Marines to deal with the occasional air unit and Zerg.

You can either move out to the left to secure a Protoss artifact for the bonus objective, or you can move to the right to beeline straight for the Xel'Naga artifact. Either way, you'll need to keep a defensive force at home, because Zerg units will be attacking from the top left (the Protoss never attack except once at the start of the mission with 3 Stalkers.) Although seasoned Terran players will instinctively want to wall-in, it is not very effective on this map with the width of the ramp and the Zerg unit mix attacking you which includes plenty Hydras, Mutas, and Banelings, all of which can spell trouble for your wall-in (and unlike a real human player the AI isn't going to beeline for your minerals.) Still, you'll need 1 or 2 Bunkers along with 1-3 Turrets and possibly more MMM (Marines/Marauders/Medics.)

When you move out to attack the Protoss, your first significant threat will be a High Templar across the bridge (which should only appear on Brutal) guarded by Sentries and cannons. Luckily you can snipe the Pylons powering the cannons from range with your Marauders, then send in one decoy Marauder to trigger a storm. When it expires, snipe the templar. Next, you will face a mixed force including a Void Ray, which is why you brought Marines along. snipe the Void Ray with the Marines and move on towards the artifact.

The Protoss base shouldn't be too hard to take down, just remember to focus down any sentries that activate their guardian shield. Once you enter the circle, you'll need to be careful because three Stone Zealots appear, which are similar to Colossus, but with a smaller splash damage zone. Focus fire them down one at a time, and if necessary, you can retreat to your base to get more reinforcements as they won't pursue you. Once they are destroyed, the mission is complete.

There are 4 Protoss artifacts on the map, which can be captured for 1 Protoss Research point each. One artifact is right outside of your base. Another is in the area to the left of your base, which requires you to go through some Zerg and Protoss defenses including two Spine Crawlers, two Photon Cannons, and some Stalkers. It is also possible to load an SCV into your Command Center and float it left from your main and unload onto the relic to claim it, completely bypassing these defenses, towards the end of the mission when you no longer need your economy. The third artifact is on the way to the Protoss base. It's located to the southwest of the ramp leading up into the Protoss base, and is guarded by three Photon Cannons. The fourth artifact is right before the area containing the Xel'Naga artifact. Right before the entrance to the Xel'Naga artifact, there is a small path to the right. The artifact is in that alcove. All the artifacts can be acquired while still beating the Zerg to the Xel'Naga artifact.

The key with this achievement is to only use units with high hit points, preferably the Marauder, and be sure to kite against the Stone Zealots. You can also use Marines if you're extremely careful with them, but because of the bridge, you'll probably want to play it safe and use Marauders. If that's too difficult, you can build Bunkers on the platform where the Stone Zealots come to life. Load them up with Marauders before entering the objective marker, and make sure whatever you use to activate the Stone Zealots gets to safety.

This shouldn't be too hard if you ignore the Protoss research and wait until your army is large enough to reach the artifact in one push. You should obviously wall off your base's ramp to guard against the Zerg attacks while preparing this. Use the initial Barracks (add a Reactor when it lands) and some Supply Depots to close off entry, with a loaded Bunker to help clean the doorsteps. Once that is taken care of, you can focus your energy on building a second Barracks for Medics and Marauders, and the usual worker push to get your MMM ball rolling. You should be able to produce 20 units and have more than enough time to complete the achievement.