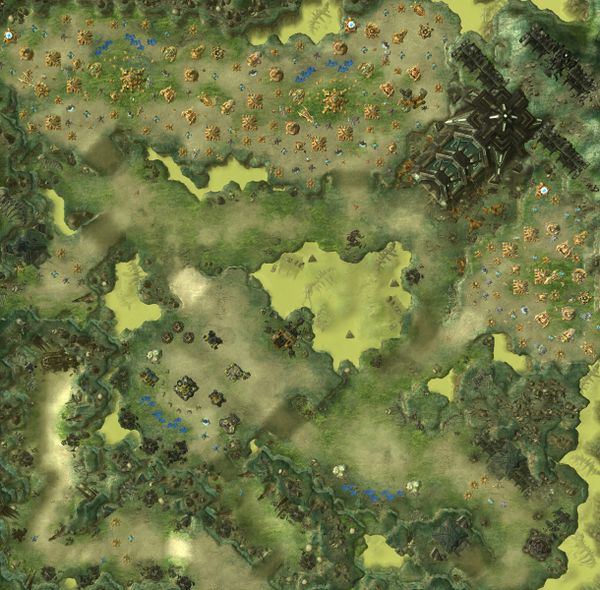 The Dig can be played after finishing Smash and Grab and 7 other missions. Raynor and Findlay move to secure yet another Xel'naga artifact on the planet Xil after Mobius lost contact with another team sent to the planet.

You can build Siege Tanks starting from this mission.

Once you reach the encampment, you'll gain control of all the buildings except the Laser Drill. Start building up your economy, and building up a defensive force consisting primarily of Siege Tanks, supplemented with Marines and Medics. Add some Marauders and Goliaths into your unit mix though, as they'll supplement your forces nicely. Position your Siege Tanks near the indicated areas, and continue to add more Siege Tanks as you can afford them. You'll want to build a Bunker by each ramp to draw fire away from the Siege Tanks, and you want a mobile Marine/Marauder/Medic/Goliath force, with more emphasis on Marines and Goliaths, as you'll need the anti-air as the mission progresses.

If you would like to increase your income, you can take control the southeastern expansion as it is rather easy to hold with Siege Tanks.

Initially the enemy attacks aren't that fierce, consisting primarily of Zealots and Stalkers, but they'll soon get fiercer, and you'll eventually start to see Immortals, Colossus, High Templar, and Archons. You'll also get control of the Laser Drill when you first start to see Archons, and it should be used to pick off deadly targets like the Immortals and Colossus. You don't really need to use them on the Archons as the game says, as your Tanks should pick those off easily, and you can focus fire them down with your infantry. Colossus should be picked off immediately with your Laser Drill though, as they will cut through your infantry easily. Use your Siege Tanks to focus fire down any High Templar that you see.

You should never have to leave your base except to retrieve the artifacts if you want to do that. See the Sidequests section for details. At various points during the mission, the Protoss will send air units to attack. If you've been focusing enough on Marines and Goliaths, then they should fall easily. Just be sure to guard your Tanks, as they can fall easily. Don't worry about the Warp Prisms, as any units that drop will instantly melt to Siege Tank fire.

When the Xel'Naga temple has around 1000 hit points, the Protoss will start to attack you non-stop. Don't use the Laser to attack enemy units at this point; just focus your fire on the Xel'Naga door. Once that falls, you're granted victory regardless of the condition of your base at the time.

The Vikings serve several purposes. You are able to fly up around the left side of the map and get vision on the smaller temples to get the researches, you'll need one for an easy achievement of the "kill 50 buildings" (see #Achievements for an explanation) and by the time the Colossus are coming out you'll have about a full tab of Vikings and can kill the Colossus relatively easy with them.

The only units you need to kill with the Laser in this scenario are Immortals and Templars. Your Marine/Tank force should be able to take out the rest pretty easily.

For this you'll first need access to Ghosts/Spectres and the permanent Cloak ability.

Throw down a Tech Lab and start pumping Ghosts. Since even on brutal the Protoss do not send detection, you can make a wall of Ghosts at both ramps.

It is suggested to keep the first Marine, Medic and Tank force you receive on the left side and aim to get 6-7 Ghosts out quickly to block the right ramp. After this is blocked, keep pumping Ghosts and block the left ramp while making extra Turrets (to defend the aerial attack) and a Command Center with your excess minerals.

After the left ramp block is completed make about 4-5 more Ghosts so you can block the right path above the natural to the right. After a wave comes move your Ghosts up to that position and take your natural. From there you can do nothing and win the game... or aim to get the rest of the achievements.

It's pretty easy to use a cloaked Ghost and the Laser Drill to pick off the relics from the temples, and tech to Vikings (if you have them) and have them hug the left wall and go to the top of the left upper Protoss base. From there you can have them hold position on the cliffs, and use the drill to pick off Pylons, Gateways, Nexuses, etc. to get the 50 buildings destroyed achievement as well.

The Tal'darim will send a lot of units at you, and some should be dealt with immediately using the Laser Drill:

On Brutal, the Protoss seems to send massive armies towards your expansion. Even with a large Siege Tank army, it might get overrun. In this case, build a bunch of scattered Engineering Bays by the choke. The Engineering Bays should not be placed side by side. Instead, they should be scattered with some space in between them. The Engineering Bays will act like a funnel, meat shield, and AI disruption (some units will attack them, blocking the rest of the army that's trying to walk through). The Engineering Bays are cheap, and if your micro is good, you can partially construct them and then cancel them when they're about to be destroyed. You can place random Engineering Bays on the left side below the ramp as well.

Alternatively kill the Photon Cannons just to the right of the expansion spot. Then build the Command Center to the right of the resources instead of the usual spot. The Protoss will not notice this expansion even on brutal. During the second air raid a group consisting of 1 Carrier and 2 Void Rays would find and attack this base. Use the Laser Drill to take care of them.

The intensity of the Protoss attack is in direct relation to the damage taken by the Xel'Naga Temple Doors. To make the mission easier, the longer it takes to reach 50% damage, the easier it is for you (for time to expand, get upgrades, build an army, and even get the Yippee-ki-yay... achievement). To avoid damaging the Xel'Naga Temple Doors, try as hard as possible to have the Laser Drill shooting at units at all times. Have it target Stalkers and Zealots. With this strategy, by the time Protoss really starts pushing, your entire defence line will be fully built, and better prepared.

To do this keep your units away from the Warp Prisms, but set your Siege Tanks in range of them. So once the units gets warped they die instantly.

When you're given control of the Laser Drill you can use scan to destroy the two protoss nexus in the northern bases. The Protoss will only rebuild a Nexus twice before giving up. Without income Protoss attack groups will remain relatively weak throughout the mission. You can also use scan and the Laser Drill to destroy all Pylons in the east Protoss base. They will not be rebuilt there and attacks from that position will dwindle to almost nothing.

There is a ledge to the east of your base, north of the natural expansion, and south of the eastern Protoss base. It is possible to place Siege Tanks on the ledge, either by dropping them or floating a Factory up there. From this vantage point you can hit the Protoss units that mass at the ramp of the nearby base. The Protoss units will remain at this staging area so you can effectively whittle down their forces.

Around halfway through the mission, the location of three Protoss relics are revealed to you. You have to use the Laser Drill to destroy the buildings housing these relics, but you have to first send units there to get sight on those buildings. The relics are only lightly guarded, but you'll have to cross the path the enemy uses to attack your base to reach them. Therefore, it's best to wait immediately after an attack wave has hit you to go retrieve the relics. Once you've cleared out the immediate area around the building that houses the relic, you only need to keep 1 unit there, like a Marine, and use the Laser to destroy the building, and then pick it up with the single Marine.

Instead of sending units for vision, float a Barracks nearby the guarding Pylons and Cannons and take everything down with the laser. Once the guards are gone, land and build a Marine to collect the relic. This is even easier if you have access to Vikings, since they can both spot for the Laser and land to pick up the relic.

This shouldn't be too hard. You'll probably end up destroying 20 units anyway with the Laser Drill.

The easiest way to win this achievement is to use floating buildings to give vision up onto the high ground the Protoss base is located in, and use Siege Tanks to fire up into the Protoss base. This should be done with the northern base, as the southern one has a narrow pathway and choke, which can prove frustrating. It's also far easier to hold the southern approach as opposed to the northern approach. You can siege your Tanks next to the ramp, destroy the Protoss defenses, and then press in with an infantry ball. This achievement shouldn't be too hard to get. Remember to try to get this achievement early, as the enemy units will get stronger as the mission continues.

Alternative if you have access to Vikings: There is a cliff above the northern Protoss base. If you fly a group of 3 or 4 Vikings up the far left (since some will get shot down before they reach the cliff), then tell them to hold position over the cliff, they can provide vision of numerous Protoss buildings. Use the Laser Drill to destroy them. Move the Vikings horizontally along the northern cliff and snipe the buildings there. The Protoss will continually rebuild them, so you can keep killing them with the Laser Drill until you earn the achievement. This can also be done by using a floating Barracks and then using the Laser Drill to kill the buildings. Sneak the Barracks along the left edge of the map and use the Laser Drill to protect the Barracks if necessary. You want to focus on the northern base because the base on the right side of the map doesn't seem to rebuild their structures.

The Drill can also destroy buildings as long as it has line of sight. If you have Scan, then you can easily build 3-4 Command Centers to constantly scan buildings for the drill to kill one by one.

BSOD Laser
The Laser Drill has four screens that display a Windows "Blue Screen of Death".