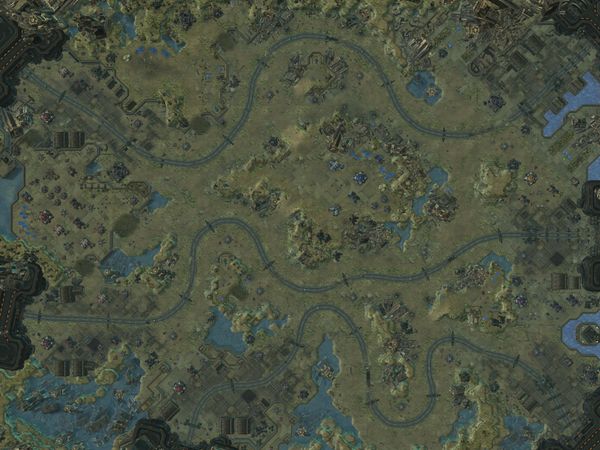 The Great Train Robbery can be played right after completing 6 other missions. Raynor's agents have discovered that the Dominion has uncovered something on Tarsonis, and that it's being transported to the main facility. Raynor moves in to intercept the artifact before it reaches the main Dominion base.

You can build Diamondbacks starting from this mission. It's a tank unit that can fire while moving.

You start the mission in the center of the map, with a small force. Immediately start building SCVs and send them to mine. Your army on this map should consist of a mix between Diamondbacks and a mix of Marines/Marauders/Medics. The infantry units are to take the hits, while the Diamondbacks should chase trains and provide support for the Marines. Since Diamondbacks have one more range than Marines, they can easily remain behind the Marines and hit the enemy units.

Your main source of income in this mission won't come from mining, but from picking up resource containers around the map and from killing trains. They should be enough to last you through the mission, though there's an expansion near the location where the left most abandoned Diamondback was. It's lightly guarded though, so you need to clear it out with some units to take it.

With your first four Marines, move out to claim the three Diamondback Tanks whose positions are revealed to you, as well as collect some resources scattered around your base. You can also easily find the fourth Diamondback in this area. Once you amass those units, get ready to attack the first train that comes out. All trains following the first one will have some sort of escort accompanying it, and as you destroy more trains, the escorts get stronger. Be sure to send your infantry force in first to deal with the escorts so you don't lose any Diamondbacks. If any get damaged, send them back to your base and repair them with SCVs.

Use the downtime between the first and second trains to explore the map, pick up resource containers, and find the fifth and possibly sixth Diamondback. The second train will have escorts, but nothing unmanageable. Around this time, the enemy will launch an attack against your main base, so be wary of that. Slowly grow your forces to match up with the escorts.

After you've destroyed the 4th train, the Dominion will build Bunkers along the tracks. While not especially dangerous, they can catch you off guard if you are chasing a Train and don't have time to stop (trains 6 & 7), completely destroying your army. Try to destroy the SCVs that are moved out to build the Bunkers, or the Bunkers themselves while under construction. They don't have any escort, so just placing a few marines around the map should take care of it. If you don't destroy them early, they'll become a bigger threat later.

When you've destroyed your 5th train, there will be two Marauder Kill Teams (about 15 Marauders and 3 Medics) wandering around the map. Don't avoid them; take them out instead. If you charge in with your infantry first, your casualties will be minimal. Notably, the Marauder Kill Teams are completely helpless against air units and move in a very tight formation. If you have access to Science Vessels, you can destroy most of the team without any risk of taking damage with 3-4 well-placed casts of irradiate.

The 6th and 7th trains are both speed boosted. You'll need Diamondbacks (about 8) to properly destroy them. They're only guarded by Hellions, which should be easy for your infantry to handle. Just make sure there are no more bunkers on the tracks, or they'll tear apart your Diamondbacks, which are too busy to retaliate. You can also keep your Diamondbacks on the side of the train opposite of the bunker.

The 8th train has a stronger escort, but it still should be no trouble for a strong enough army. If you are unable to amass a large enough army to handle the last train, create a small diversion as the train passes your base and station the bulk of your Diamondbacks a little further down the track. The diversion will draw the escort towards the rear allowing your Diamondbacks to have a head start hitting the train. When the escort returns to hit your Diamondbacks, shrug off the attacks by constantly moving and hitting the train. It should not be a problem to kill the train before losing all your troops. The mission ends when the train is destroyed.

If you already completed The Dig, you should have access to Siege Tanks, and maybe even Siege Breaker Mercenaries. Because of the nature of the mission: Wait in place while the opponent slowly walks towards you, Siege Tanks make the mission a breeze, even in Brutal. Place the Siege Tanks on the tracks, with a few Marines in front. Your Marines should soak up damage, and destroy air threats, while your Siege Tanks literally obliterate all the escort. Keep a few Diamond Backs to chase down the Train, and keep in mind you'll need about 8 Diamond Backs to chase down Train 6 and 7. With this strategy, you shouldn't even bother with Marauders, and keep Medic use to a minimal.

This tactic also requires you to have completed The Dig, as well as having access to Science Vessels (and, although not a requirement, preferably the Tech Reactor, which you should have if you completed all the Protoss missions).

Basically start building a few Goliaths at the start of the mission for the first train, and send your starting Marines out to quickly capture some of the mineral crates and Diamondbacks. Throw down a Starport around the time you down the first Train, and get a few Science Vessels (2 is enough in the beginning, supplement a bit later perhaps). You can also supplement with Siege Tanks/Breakers for extra damage. The Science Vessels keep your army alive, including the Diamondbacks you find, and they also excel at single-handedly tacking out the Marauder Kill Teams without any losses using a few well-placed casts of irradiate. This approach once again makes this mission a total breeze, even on Brutal.

On Hard difficulty (but not Brutal), placing two bunkers by each track filled with Marines (and a single Marauder each) will also make this mission easier, even without access to Siege Tanks- though additional Siege Tanks behind bunkers will be a great help. The bunkers will hold the enemy escorts in place while the train moves on ahead of them, allowing your Diamondbacks to focus solely on the train "downstream" past your bunkers without worrying about the escorts or the Kill Squad (the Kill Squad will attack your bunker defenses and die shortly after spawning).

Furthermore, there are a few overhang/plateaus overlooking the tracks that provide good high ground advantage, e.g., the one where your first Diamondback (just West of your starting base, on the same plateau as your base) is found, and the one just West of your base (defended by a 3 enemy units, by the middle track). Building bunkers and defenses in these areas make it even easier.

Do note that on Brutal difficulty, it is better to just mass as many Diamondbacks as possible and skip the bunkers and defenses all together. The enemies that are sent at you make short work of any bunkers you set up and there isn't enough time to repair and reinforce them all making it a futile effort.

If you avoid this mission for as long as possible, you can complete 18 missions before heading to Tarsonis. You should have earned up to 1,525,000 credits and both Protoss and Zerg research should be completed.