< Campaign
[e][h]Wings of Liberty
Welcome to the Jungle 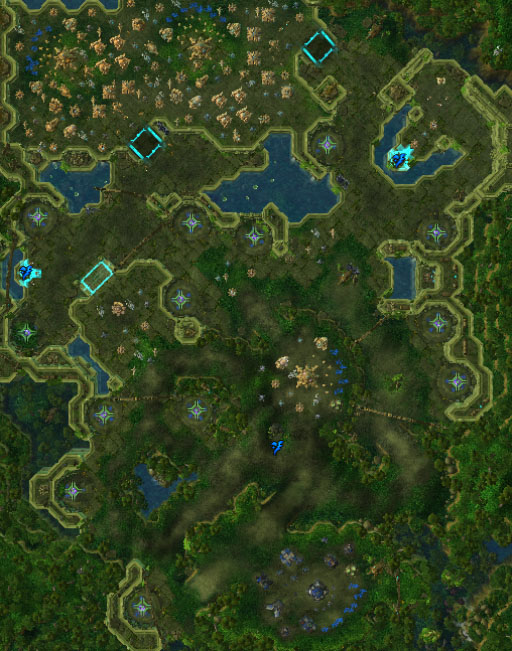 You can play Welcome to the Jungle after finishing The Devil's Playground. Raynor works with Tosh again, this time to capture some Terrazine gas. Unfortunately, the gas is guarded by a fanatic Protoss group called the Tal'darim. Raynor and Tosh must steal the Terrazine gas from the Protoss fanatics.

You can use the Goliath starting from this mission.

There are 13 Terrazine deposits in total on the map. The Protoss base is located in the upper left hand corner of the map, and they'll be launching periodic attacks on your base. The heaviest concentration of altars are on the left side of the map, and in the middle. You can essentially ignore the 4 altars on the right side of the map for the purposes of completing this mission's primary objectives. There is a Protoss expansion that you can destroy to the North of the base, which opens a path so your forces can quickly seize the center of the map.

Upgrades that will make your life easier:

You start off on the bottom center part of the map, with a small force. The Protoss will be using a lot of air units on this map, so you'll want to skew your unit composition in favor of Goliaths, Marines, and Medics. You'll also want to supplement your forces with Marauders though, because the Protoss do have access to Colossus and Storm on this map, which will rip through Marines, and you'll want some Marauders to tank for your Marines and snipe Colossus.

Once the mission starts, immediately start mining resources and building up your army. You'll want to move quickly because the mission shifts into a race against time rather quickly. Supplement your initial forces with a Medic and Marauder, and move out to capture the altar to the left of your base. You don't want to build too many Goliaths early in the mission, as Stimmed Marines and Medics are much more effective in smaller numbers, and you'll want your gas to start researching upgrades. Once you've built a sufficient amount of Medics, then you can start incorporating more Goliaths into your army.

Goliaths will lack armory upgrades(as this is their first mission) and therefore not be very effective. ATG they're not impressive - stimmed Marines+Marauders will do it better, cheaper and live longer with (upgraded) Medic support. ATA will be handled again better by stimmed marines and double upgraded Missile Turrets. So i recommend Marines, Marauders, Medics, Missile Turrets, Sensor Towers & SCVs.

Marines: Stimpack is a must. Life shield is very nice to have. Medics: Stabilizer Med-packs again a must. Marauders: Concussive Shells must have(AREA SLOW). The life upgrade is also nice but probably out of budget at this point. Missile Turrets: Both upgrades are must but if you must choose pick the area damage first. Bunkers: Upgrades for bunkers are not mandatory for this mission but nice to have. For campaign i recommend +150 HP instead of the extra puny gun. Especially when later combined with SCV double repair and building auto rep up 50%.

At this point protoss forces are isolated in their bases and cannot break through. Collect missing protoss artifacts for research. Send 7-8-9 SCVs to harvest from every geyser you managed to secure on your side of the map at once. Protoss will attempt a final attack that will be crushed by your defence line and mission will soon end in victory.

There are 3 Protoss artifacts scattered across the map, each worth one Protoss research point. One is undefended right outside of your base to the North. Another is on the left middle part of the map, and is guarded by three Zealots. The final one is in the top right corner of the map, past the two altars there. It's guarded by some Photon Cannons and Stalkers.

Alternatively, if you have an Orbital Command, you can use an air unit to spot the relics and then call down a Mule on them, bypassing their defenses entirely. If you have Vikings, you can transform a Viking to Assault Mode and land on a relic to collect it.

Welcome to the Jungle
Appetite for Destruction
It's So Easy

To get this achievement, solely focus on production of (compared to Goliaths) more mobile infantry (Marines, Medics, Marauders). 2 Barracks with Reactors and 1 with a Tech Lab should do the trick. Get the 4 canisters closest to your base first, then go to the south-east one. Keep producing bio all the time. When the Protoss try to cap the 2 center altars at once, push in with your infantry ball, and focus on the Colossus and the capping Probes first.

If they are capping an altar far to the north, take a group of Hellions around the right side of the base north of yours, and suicide run them to attack the Probe. You might want to just clear that path all the way to the last artifact, so that if they try to cap, you can get the Hellions there easier.

An alternate method is to make an army with only Marines and Medics (I used one Barracks with a Reactor). Start massing an army and wait for the first protoss seal attempt (it should be near the SW corner). Attack the small seal squad, collect the two nearest gas, and mass a few more infantry. If you have extra minerals use them on Goliaths and the infantry upgrades. Collect the two Terrazine near the previous ones (also in the SW corner), and continue making Marines + Medics. When the Protoss attempt to seal an altar on the east wall, send your army plus 3 SCV's, and leave ~6 Marines + 2 Medics for defense (an extra Missile Turret or two helps). Mine the three lowest Terrazine along the east wall at around the same time. You can keep all of your defense at the northernmost one - all Protoss attacks will go there. For this method you need to be very quick - the game should finish at around 15 minutes. This avoids stopping the more distant seal attempts.

Easy and cheap: Wait to tackle this mission until you've unlocked Vultures. With even moderate micro skills you should be able to swoop 3-4 Vultures in, snipe the Probe, and zip away without any casualties. The Vultures will have plenty of time to get repaired before the next seal attempt. As a plus, the spider mines aid in ground base defense, making it even easier to focus on anti-air defenses. Don't bother trying to use the mines to preemptively defend the Terrazine nodes, the Protoss air support will destroy the mine as soon as it pops up.

Another easy trick is if you have the Reapers timed mine ability. Just send 1-2 Reapers to the terrazine getting sealed and have them throw their mines. The Probe doesn't move and it should die if your Reaper manages to throw the mine.

This one is simple: Build a defensive position outside the two entrances into the Protoss base, far enough away that Colossi can only approach your two defensive lines from one chokepoint each. Six turrets and three Bunkers per defensive point, with 2-3 SCV's to repair, should hold the line easily. This means you have no further worry about the Protoss attempting to cap the Terrazine deposits, and you can safely mine minerals and gas while building up your army to your heart's content. Wait until just after a Protoss attack and send your forces in to victory.

If you avoid this mission for as long as possible, you can complete 21 missions before heading to Bel'Shir. You should have earned up to 1,955,000 credits and both Protoss and Zerg research should be completed.

On the map there is hidden Murloc Marine.