Carrier (Legacy of the Void)

This article covers the current multiplayer version of this unit. For other versions see Carrier (Wings of Liberty and Heart of the Swarm) and Carrier (Legacy of the Void Campaign). 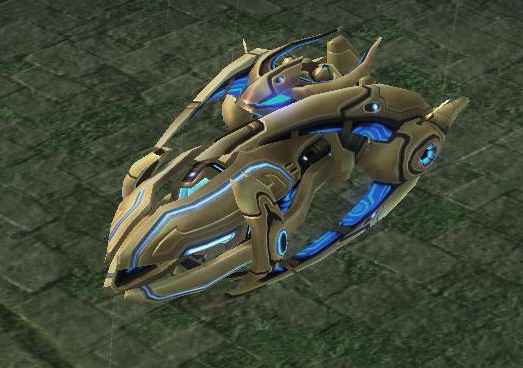 Carriers are the capital ships in the Protoss air force, built at the Stargate with the Fleet Beacon as a prerequisite. Unlike other units, Carriers do not engage the enemy directly. Instead, they launch tiny Interceptors that attack in a swarm around the Carrier. The Carrier is a production facility as well; Carriers are responsible for training additional Interceptors. The Carrier initially warps in with four Interceptors available, and from there it can be ordered to train additional Interceptors (an ability that can be set to autocast) for 15 minerals each. The maximum number of Interceptors that any Carrier can hold at one time is eight.

In LotV, an ability was added where Carriers were able to activate Release Interceptors to permanently launch all interceptors at a great distance. After 43 seconds, any remaining Interceptors perished. However, this ability was removed in Patch 3.8.0.

When attacking, Carriers launch their available Interceptors towards the target, at a delay of 0.5 seconds per Interceptor; a full complement of Interceptors thus takes 4 seconds to all launch from the Carrier.

Note that manually assigning a target will cause the Carrier to move towards the new target if it is outside of launch range. However, if Interceptors have already been launched and are not already disengaging, it is possible to change targets and then take advantage of the leash range by immediately moving the Carrier back; the launched Interceptors will migrate to the new target without returning to the Carrier despite it being out of launch range, though they will switch targets as noted above if they perceive a closer threat in launch range unless they are continuously manually assigned the farther target. Any unlaunched or newly created Interceptors will not launch at a target outside of launch range, though, so Interceptor losses suffered will not be able to be replaced at leash range.

Current use in competitive play[edit]

At the start of the Legacy of the Void period, Carriers were not widely seen in SC2 due to the inability of any build to safely transition to them. However, they were still extremely powerful versus stationary defenses and AI controlled units, since the AI will target the individual Interceptors first, not the Carriers themselves.

Patch 3.8.0, with the objective of increasing the combined power of Stargate play, made the Carriers more available, mainly because of the reduced cost of the Interceptor, down from 25 to 5. The 8 Interceptors cost 40 minerals after the patch instead of 200 before. Over time, patches 3.9.1 and 4.0.0 increased the cost back up to 15 minerals (120 minerals for 8 Interceptors).

Pre Patch 3.8.0, Carriers were not very good in Protoss vs. Protoss (PvP) because they were easily countered by Stalkers + Sentries, Tempests, and Void Rays. Post Patch 3.8.0, however, Carriers became the dominant late game unit choice due to the reduction of Interceptor costs and the supply nerf (6, up from 4) to the Carrier's traditional hard counter unit: the Tempest. In a sense, late game PvP air battles switched from Tempest vs Tempest battles to Carrier vs Carrier battles. To reduce the dominance of Carriers in late game PvP, Blizzard increased the Tempest's Kinetic Overload (anti-air) damage from 30 (+14 massive) to 30 (+22 massive) in Patch 3.14.0. Thus, a player opting for a Carrier-heavy style should be aware of Tempests since regardless of the supply nerf, Tempests can still outrange Carriers and deal additional damage against them. Void Rays are still used to counter Carrier plays, but they aren't the optimal counter to Carriers as Patch 3.14.0 nerfed their mobility when Prismatic Alignment is activated. Another counter to Carrier-heavy plays, albeit a soft one, is to add Archons to one's army composition. The Archon's splash damage is effective against the Carrier's Interceptors.

Vikings, while killed in 2 volleys by Carriers, are less than a third of the cost, and while one Carrier will defeat 3 Vikings, this is the only match-up where the Carrier wins cost-for-cost: 4 Vikings will defeat one Carrier, and 6 Vikings will defeat 2 Carriers if they focus their fire. Vikings are a very soft counter, though and can't kite Carriers after Interceptors grab a target, so with appropriate micro, Carriers can stay competitive. Marines can't out range a well placed Carrier (besides getting shredded by the Carrier's improved targeting AI), though if they can get within range, cost-for-cost, Marines are also a good defense. Terrans have the best options for killing Interceptors, so careful management of your squadrons is key.

Beware of heavy AA emplacements. A location fortified with Marines and Missile Turrets can quickly turn Interceptor squadrons into dust. Interceptors no longer recover max health between sorties as they did in Brood War, and while large numbers can withstand a serious beating overall, they will not last long enough to break a sustained anti air defense.

Be cautious of flying structures. Carriers will automatically launch Interceptor squadrons at targets in range, and clever Terrans may use this to tease your Interceptors into a hail of gunfire at minimal risk.

Battlecruisers are extremely dangerous to contend with. With 3 base armor, a Battlecruiser with equal upgrades takes 40% damage from Interceptors, and will wipe out a full squadron in half the time you need to take one down. Attempting to kill Battlecruisers with Interceptors can turn into a huge mineral drain that leaves your Carriers vulnerable. To top it off, a well placed Yamato Cannon can severely damage or kill your Carriers outright, making it a bad idea to go toe to toe against a Terran victory fleet.

Carriers are very powerful against a Terran that is going for a mechanical composition (which includes primarily Hellions, Siege Tanks, Thors, and Banshees). Carriers, if unscouted, supplement a typical Protoss composition very well because of the lack of anti-air in the Terran's army. However, it scouted, Vikings will almost definitely be made as a direct counter, so it is important to not over-commit to Carriers in this type of situation, and use them to either destroy the Terran army and/or to force an overproduction of Vikings.

With the changes that came in Patch 4.7.1 the Carrier lost it's ability to burst down targets quickly as it used to. The primary reason is the removal of Graviton Catapult which slows down the Carrier's ability to reach full combat capacity. The second change that affects Carriers is the nerf to interceptor build time from 6-11 seconds. In compensation the build time of the Carrier was lowered to 64 seconds and it's HP was buffed to 300 HP from 250 points.

Corruptors are a very strong unit against a Carrier, with their high base speed of 4.725 they can easily hunt down and decimate Carrier fleets without adequate support from Storms, Archons and Voidrays. Hydralisks can also be a problem as they are good at taking down Interceptors quickly.

The Carrier's role is primarily to force Corruptors from a Zerg and to add extra damage. Making several Carriers in late-game PvZ can cause the Zerg to overcompensate in Corruptors, because of the difficulty in knowing exactly how many Carriers the Protoss wants to make, and how many Corruptors to make per Carrier. Do note however that if a ground transition is made by the Protoss after the Carriers are killed the remaining Corruptors can be morphed into Brood Lords, which may pose a serious problem if you are not adequately prepared for them.

In conjunction with Archons and the Mothership, Carriers will decimate the Zerg's late-game Brood Lord/Infestor/Corruptor army composition. Carriers can easily pull back to the cover of the Archons while Corruptors try to focus fire on the Carriers and Mothership. Due to the AI, the Corruptors will stack up quite a bit when focusing the Carriers, thus rendering them susceptible for insane amounts of Archon splash damage. Once the Corruptors are dead, Brood Lords will fall along with the Infestors.