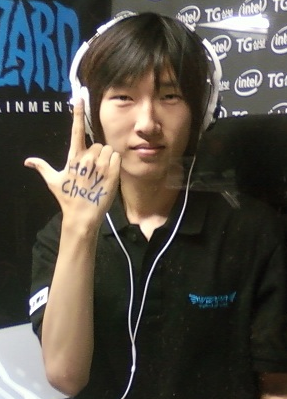 Hong "Cella" Seung Pyo is a retired Zerg player and coach from South Korea who is currently the coach of European League of Legends team Ex Nihilo.

Cella was originally a leading member of the clan WeRRa, and was the first to officially confirm the clan's disbanding after the scandal [1][2]. He is also a top-ranking ladder player on both the South Korean and North American servers.

Cella made it to the round of 64 in season one of the GSL, but did not qualify for the second or third seasons, being knocked out by TSL's Clide and TankBoyPrime, respectively. Cella joined the SlayerS clan (led by BoxeR), along with one of his former teammate Jys, formerly known as Mio. He was later confirmed as being on the roster.

Although remaining relatively silent in the South Korean scene, Cella came back to notability as the new vice captain of Slayers where he performed the coach duties in GSTL2 for Slayers due to MMA participating as a player. SlayerS ultimately won GSTL2 and with that, Cella would earn the Best Coach award as well as the right to be the coach for team Korea in the 2011 GSL World Championship.

At the beginning of May 2011, Cella was promoted to the head coach position of Team SlayerS. [3]

He participated in the GSL August Code A qualifiers, making it to the finals against DongRaeGu. He humorously said to the viewers of the stream that he would 6 pool, and actually attempted it against his opponent but failed. Cella ended up losing 0-2.

Cella attempted to qualify for 2012 GSL Season 2's Code A, but lost in the finals against the amateur player GGanDoL 2-1.