Changeling (Legacy of the Void)

This article covers the current multiplayer version of this unit. For another version see Changeling (Wings of Liberty and Heart of the Swarm). 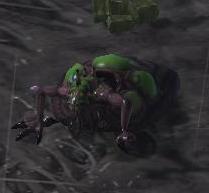 Once disguised, the Changeling takes on the enemy's own color and will no longer be automatically attacked by the enemy's units, allowing it to infiltrate enemy territory unsuspected. Changelings cannot be discerned as impostors by any form of detection, nor will the secondary effects of EMP Round reveal their true allegiance. Likewise, a Sensor Tower's Radar ability will not identify the Changeling as hostile after it has morphed. However, if the opponent selects the Changeling, they will be unable to give it orders (since it is not theirs) and the word "Changeling" will appear in place of the unit type that it appears to be. In the event that an opponent does not spot a Changeling joining their army, it will often be revealed when they notice that it doesn't have a selection circle around it when they box their army. This can be slightly mitigated by ordering the Changeling to follow the unit it is disguised as within an army, so that it won't be noticed when the army is moved.

Disguised Changelings can only be killed by manually forcing units to attack it (right-clicking on it will issue an Attack command) or waiting for its timer to elapse. Note that the Changeling's Disguise ability is only triggered within a range of 12 and only if vision is provided for it, as the Changeling itself features a sight range of just 8. Units that are "hidden" to the Changeling (e.g. unspotted units on a cliff or cloaked units) will easily dispatch of it in its native form. Also, note that Siege Tanks can attack up to a distance of 13 and thus can automatically kill an unmorphed Changeling before it can get in range to disguise itself.

Some properties of the Changeling change after it disguises itself. Changelings disguised as Zerglings will move at the speed of a slow Zergling and get a speed multiplier from Creep, though they do not benefit from any player's Metabolic Boost upgrade even if they appear to have wings. Changelings disguised as Marines or Zealots have the sight range of the copied unit, increasing their sight to 9. Finally, Changelings disguised as Zealots will appear to lose their shields to an EMP Round, but will begin regaining them immediately at a rate of 0.5 points per second. This is in contrast to real Protoss units, which will not begin regaining their shields for 10 seconds and will regain them at 2 points per second.

Disguise is a passive ability which is triggered automatically.

The Changeling is most often used to keep track of the opponent's main army, and is usually ordered to follow one of the enemy units (preferably of the same kind). You then get constant updates on the composition and position of their army, so that making unit counters, flanking and harassment are all much easier. These are very effective scouts against an uninformed opponent.

Changelings are also good for gaining temporary control over a Xel'Naga Tower as they do not cost any supply.

Changelings work very well against Protoss since Zealots are normally part of any army and will be hard to spot, allowing for a lot of scouting.

Changelings can be more effective against a Zerg player because the Zerglings they morph into are easier to hide and harder to target.