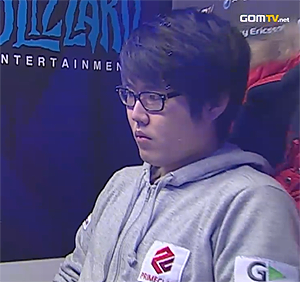 He was a member of eSahara at the time of his retirement.

Check started playing Warcraft III from launch and competed in his first major event in 2002. He was a top 10 player for most of his career but never had a period of strong domination. He generally played Night Elf in Warcraft III but was known to play Orc in some matches. He won two OnGameNet televised Warcraft III leagues in 2003 and 2004, as well as a number of team and clan leagues. He was a member of a large number of different teams throughout his career, including SK Gaming, nGize, mousesports and World Elite. During the StarCraft II beta, Check announced in an interview with YGosu that he would play StarCraft II competitively and planned to become a top professional player.[1]

On March 13, 2012, it was announced via his Facebook that Check had officially retired from progaming.[2]

Check played in the Platinum league on Asian servers under the name "Painkiller". He won the first PlayXP Weekly Tournament playing as Protoss after beating Zenio 2-0 in the finals.

He is a consistent player in the South Korean scene who managed to qualify for all 3 of the GOMTV Global StarCraft II League Open Seasons. He advanced to the Round of 16 in seasons 1 & 2 where he lost to RainBOw, both times with a score of 0-2. Check qualified as an S-class player even though he was unable to reach the Round of 8.[3] On October 21, 2011, it was announced that Check had left Prime due to personal reasons.[4] On November 27, he joined eSahara.[5][6]

In the 2011 GSL January tournament, during the Round of 32 groups, Check was able to take a win from Jinro but lost to Ensnare and IdrA, putting him fourth in the group and into the Up and Down matches. There, he defeated Cezanne and maintained his place in Code S for the next season.

For the 2011 GSL March tournament, Check was selected by RainBOw to play in his group, which also included Jinro and Polt. In the Round of 32 groups, he was able to defeat RainBOw and secure revenge for his two losses from Seasons 1 and 2. He lost a game to Polt but then won in the tiebreaker match, putting him 2nd in the group and allowing him to advance into the Round of 16 where he would lose to NaDa.

In the round of 32 of 2011 GSL May, Check came fourth place in group F, losing to Killer and then FruitDealer, sending him to the Up and Down matches. There, he lost 0-2 to aLive, ending his Code S run.

For the first time being in Code A in the year 2011, he was able to make it to the Round of 16, losing 0-2 to Noblesse. He would remain in Code A for another season. In the GSL August, he defeated the foreigner NaNiwa and Sniper. In the Round of 8, he lost 0-2 to GanZi in which game 2 was in his favor but lost due to a successful final attack by GanZi. Check ended up in a tie with jjakji and LosirA in the Up and Down matches, and stayed tied even after the first playoff round. However, in the second round he lost to both of them, therefore staying in Code A. Check played in Code A again in GSL October where he managed to make it into the Round of 16 before falling to Sage 0-2.

In the following GSL he would go down 2-0 in the first round to Squirtle.

On February 7, 2011, for the 2011 GSTL February, Prime sent out Check as their third player against Team SCV Life. The score was currently in favor for TSL at 2-1. He wasn't able to take out TSL's aLive and allowed TSL to further their lead to 3-1.

On March 22, 2011, for the 2011 GSTL March, Prime sent out Check as their second player against StarTale. The score was currently in favor for ST at 1-0. He wasn't able to take out ST's RainBOw and allowed ST to further their lead to 2-0.

On July 21, 2011, for the 2011 GSTL Season 1 Group A, Prime sent out Check as their third player against oGsTL. The score was tied at 2-2 for both teams at that point. Check took out NaDa and put Prime in the lead by a score of 3-2. oGsTL sent out HuK next and Check wasn't able to defeat him. Check's loss allowed oGsTL to tie up the score at 3-3.

On October 8, 2011, for the 2011 GSTL Season 1 Playoffs, Prime sent out Check as their starting player against MVP. Check took out Vampire and put Prime in the lead by a score of 1-0. for Check, MVP sent out Noblesse next and Check wasn't able to defeat him. Check's loss allowed MVP to tie up the score at 1-1.

From September 3 to September 4, 2011, Check participated in the IPL Season 3 Qualifier 2 Check started off from the Round of 64. Check defeated DeMusliM, PeGaSuS, Lots, and Socke, in order to advance in to the semifinals to face Ryung. He wasn't able to defeat Ryung and fell down to the 3rd/4th place match. In the 3rd/4th place match, Check found even more misfortune as he lost to Polt by a score of 0-1 and ended up taking fourth place.