Cheese most often refers to an unexpected strategy that relies in large parts on lack of information and/or psychological impact on the opponent. Cheese build orders typically revolve around an early attack that, if undetected, is more difficult to defend than execute.

ByuL plays an early Pool vs TaeJa on Daybreak. Since ByuL pulls Drones it's a classic Cheese, because when it fails, it's game over.

But players will not always cheese for an outright win. In certain scenarios, cheese can be used to either force a low-econ game or to gain an early advantage. The unbalanced nature of cheese usually serve to make decision making on the defending side more fatal. Thus, the cheesing player is given a chance to come back from an otherwise lost game or the possibility to outwit a stronger opponent. A common form in practice is to neglect a long term viable economy to be able to produce a couple of extra units for attack.

The most common cheese openings, like Bunker, Cannon, 6/7/10pool and Proxy rushes, prey upon the economic style's need for workers in early defense. Others invest in early tech that must be countered in a specific way. Some are more nuanced: seven and five Roach into Speedling Zerg vs Protoss, and Hellion into two port Banshee pressure Terran vs Zerg, rely on forcing a certain enemy tech choice and then countering it decisively as it is deployed (In the first case the Roaches bust the wall and force Stalkers; in the second case the Hellions force speed/Spines/Queens/Roaches and delay Lair). Here, the cheesing player gains the advantage by assuming that his opponent will react to what he sees in a "smart" way. Like most cheese, these builds are much easier to stop once a player has gained a familiarity with them. This is why many cheese builds surge in popularity on the ladder, only to disappear weeks later. 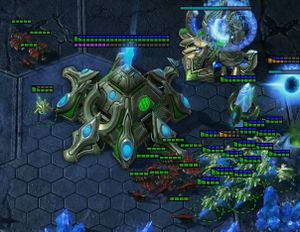 Cheese is usually characterized by its strategic fragility. The cheesing player is making a wager that the defending player will have some sort of oversight in his build. Examples are: Lack of detection against Dark Templars or Banshees, lack of anti-air against certain Stargate builds, or economic greediness against a two raxing Terran. However, the cheesing player is usually putting himself at a large deficit in the long run by attempting to expose this weakness. In certain cases (see: BitByBit) the cheesing player will put 100% of his economy on the line in attempting an early win.