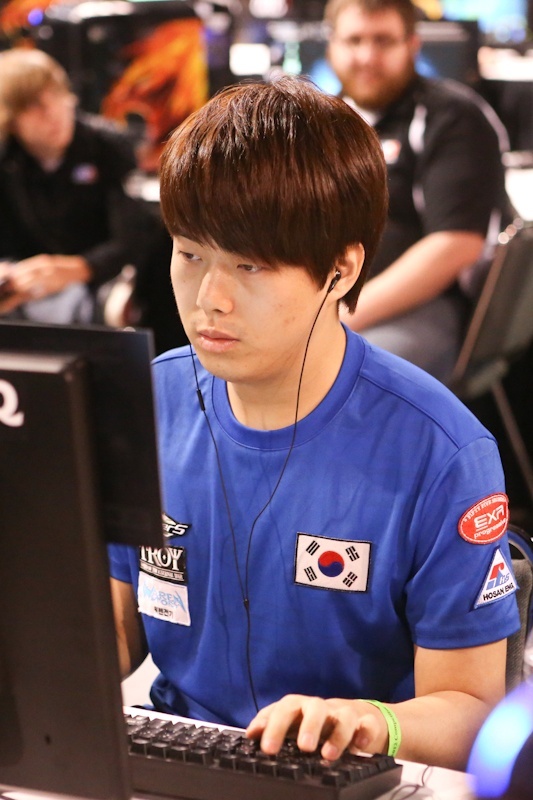 He is a also former South Korean coach for KT Rolster.[1]

Han "Clide" Kyu Jong is a StarCraft II Terran player, former coach and Brood War player on the professional team MBCGame HERO. He was one of the first members alongside FruitDealer and Tester to be on TSL.

As part of TSL, Clide participated in GOMTV's GSL Open Season 1. He advanced convincingly to the Round of 16 where he lost to HongUn 1-2 who Void Ray rushed in the final set. Clide was knocked out of Ro64 during season 2. When asked about this in an interview, he said, "It wasn’t a slump, but rather a breakdown. My mom was very ill so I could not focus. Last round of 64 matches were meant for me to lose. That’s how hard it was for me. Now, my mom has recovered, and my game play is recovering as well."[2]

TSL was invited to the Brainbox Starcraft II Team Invitational. FruitDealer correctly predicted that he would not have to play in his team match because Clide, who was playing first for the team, would score an "All-Kill" (going 3-0) against the Zenith team.[3] In the final GSL open season, Clide would be defeated by Leenock 1-2 in the Round of 64 where his play, despite losing, was quite impressive.

Due to his cumulative qualifications results, Clide has been named as one of the 32 S-Class players for the GSL 2011 tournaments. He was one of the 4 TSL members to do so.

In the 2011 GSL Super Tournament he defeated RainBOw 2-1. In the Round of 32 Clide faced Leenock, a rematch of the highly acclaimed series from Season 3. Clide lost again, this time 0-2.

On November 28, 2011, it was announced that Clide had joined SlayerS and that JYP and Killer had left TSL. In addition, HyuN would join TSL.

In the GSL May, Clide once again led his group 2-0, beating NesTea and San. He would go onto the Round of 16 where he lost to his teammate Killer 1-2. In GSL July, Clide advanced at the top of his group for the fourth time in a row, beating anypro and Ensnare. In the Round of 16 he was eliminated 1-2 by his ex-teammate TricKsteR in a close series. In August, Clide did not advance to the Round of 16. In the group stages, he was able to win his first match against SuperNova then lost the next two to Virus and HongUn.

Clide had a strong showing in GSL October where he made it to the quarterfinals for the first time, taking out Noblesse, Ensnare and Ryung. He faced MMA in the Round of 8 where he lost in a close series, 2-3.

After going 0-2 in the first round of GSL November, Clide dropped to Code A. There his first match was against Creator in the Round of 48, whom he beat. He would then lose to PartinG and end up placing fifth in his Up and Down Group, dropping into Code A for the first time.

In the 2012 GSL Season 1, Clide lost 0-2 to Sniper in the first Round of 48, completing a surprising drop out of the GSL. He has been unable to qualify since then.

It was announced on October 29 that Clide would participate in DreamHack Winter 2011. However, he did not participate, likely to focus on his Code A match.