Colossus (Legacy of the Void)

This article covers the current multiplayer version of this unit. For another version see Colossus (Wings of Liberty and Heart of the Swarm). 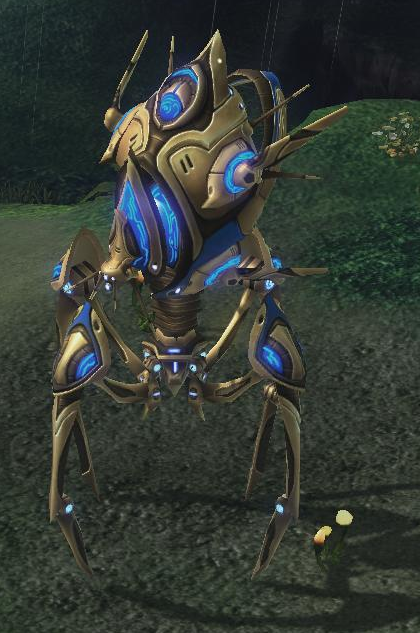 Unit Information
Type:
Ground Unit
Description:
Battle strider with a powerful area attack. Can step up or down cliffs. Can be targeted by anti-air weapons.
Built from:
Robotics Facility
Requirements:
Cost:

The Colossus (plural -lossi, -lossuses) is a massive Protoss battle strider that towers over all other ground units on the battlefield. It is built at the Robotics Facility, but requires the presence of a Robotics Bay to be unlocked. Its long-range dual Thermal Lances target units in a wide linear area of effect, perpendicular to the Colossus's direction of fire. This makes the Colossus a powerful siege unit that can quickly destroy an enemy's ground forces.

Colossi have massive legs and enormous height, which can both be an advantage and disadvantage. Firstly, the height allows anti-air attacks to hit it; care must be taken with Colossi to make sure units like Vikings or Corruptors do not pick them off in battle as they are relatively fragile units for their cost. Secondly, its weapon comes with a base range of 7, and the Extended Thermal Lance upgrade extends it to an impressive attack range of 9, which allows it to attack from behind the main Protoss army. Thirdly, the legs grant them the ability to traverse cliffs and provide vision of high ground areas, as well as stacking over other units in the player's army. However unlike smaller ranged units, if a Colossus is on the high ground and attacks enemy units on the low ground, the enemy gains temporary vision of the Colossus and can return fire. This revealing mechanic does put a limit their ability to exploit high ground, but can still be useful for engaging short ranged units. Overall, care must be taken to account for these unique characteristics, but these also help make the colossus a powerful unit.

The Colossus is a heavy support unit that deals large amounts of damage over a moderately sized area (2.8 width, 0.3 depth). The massive battle strider is capable of obliterating large amounts of light ground forces within seconds.

The Legacy of the Void version of the Colossus does less damage in general than earlier versions of the unit. In return for +1 base range (though the same total with Extended Thermal Lance) and greater attack speed, its base damage was reduced. It does bonus damage against light units, and thus can be effective against massed light units such as Marines, Zerglings, and Zealots.

Researching Extended Thermal Lance is considered standard in all match-ups if Colossi are to be built, as the upgrade grants it longer range than most other ground units, allowing it to fire from a safe distance. It is only outranged by the Terran Siege Tank in its immobile Siege Mode and the Zerg Lurker with Seismic Spines. Along with Cliff Walk, this allows the Colossus to kite ground units using the terrain to its advantage. Most ground units will not be able to pursue correctly managed Colossi without taking high amounts of damage or simply dying.

The Colossus's main weakness is its additional vulnerability to air attacks. Vikings, Corruptors, and Tempests deal bonus damage to Massive or Armored units, both of which apply to the Colossus. As Air units can easily flank the Protoss army, they may circumvent the Protoss anti-air and destroy the powerful Colossi without risk. A Colossus-heavy army needs to be bolstered with appropriate numbers of anti-air support, in order to combat aerial threats.

There are a few units with different anti-air and anti-ground weapons. Of these, the Tempest, Queen, and Infested Terran will prefer to attack the Colossus with their AA weapon, and the Battlecruiser attacks with its AG weapon. If the Thor engages with its AA weapon (which is longer-range), it will continue attacking with it, but if it begins to engage at low enough range, it prefers its AG weapon.

Unlike its Brood War predecessor, the Reaver, which was mostly used in combination with the Shuttle both in battle and in harassing enemy bases, Colossi have very limited potential as harassment units. Mining workers will not usually line up in a shape that would allow for effective application of the Colossus's splash damage, thereby significantly decreasing the effectiveness of its weapons. Also, a Shuttle can carry two Reavers, or one Reaver and some Zealots, whereas one Colossus fills a Warp Prism.

The Colossus synergizes well with Sentries and Stalkers. Force fields can be used both to block off and to entrap enemy ground units (allowing for maximized splash damage) while Stalkers provide anti-air support and act as a meat shield (alongside Zealots); the Blink ability may also increase the Stalkers' damage absorption. With its height, the Colossus is able to reveal areas atop cliffs, enabling allied units to fire upwards on to high ground, as well as enabling Stalkers to Blink to targeted locations, which would otherwise be inaccesible.

As a rule of thumb, it is possible to sustain continuous Colossi production out of double Robotics Facilities per mining base, so long as no Chrono Boost is used.

Colossi are not typically used in PvP matches in Legacy of the Void. Protoss players typically use Immortal, Archon, Chargelot (IAC) or Blink/Disruptor compositions instead of Colossus-based armies.

Being the most consistent source of splash damage in PvT, Colossi are not susceptible to micro techniques Terran players can use against the other main splash damage options, Psi Storm and Disruptors. Colossi are good against Marine-heavy compositions owing to their bonus against Light units. They are however very weak against large masses of Marauders, both because Colossi have no bonus damage against them and because Marauders deal bonus damage against the Armored Colossi.

Colossi can be effective if the Zerg decides to make Hydralisk, Zergling or Baneling-heavy armies. Against Armored units such as Roaches, they are not as cost-effective as their heavy-fire counterpart, the Immortal.

Use of Colossus-based armies in PvZ is very limited as they require a significant investment to bring onto the field. While they can be effective at a certain point, they only remain so while the Zerg makes nothing but Lings, Banes or Hydras or a combination thereof. They also fare quite badly facing Zerg Hive tech. Vipers are useful, Abducting Colossi right into the Zerg forces, killing them before they can deal any real damage. Ultralisks with their high armor (and their large size making them less vlnerable to splash damage) take low amounts of damage from Colossi, hence necessitating the use of Immortals. Corruptors work as well as Vikings, with the Colossus's trait of anti-air vulnerability. Brood Lords are also deadly as they outrange Colossi and deal large amounts of ground damage. Lurkers, especially with Adaptive Talons, are also an option against Colossi, as they slow the advance of a Colossus-based army if it lacks Detection.