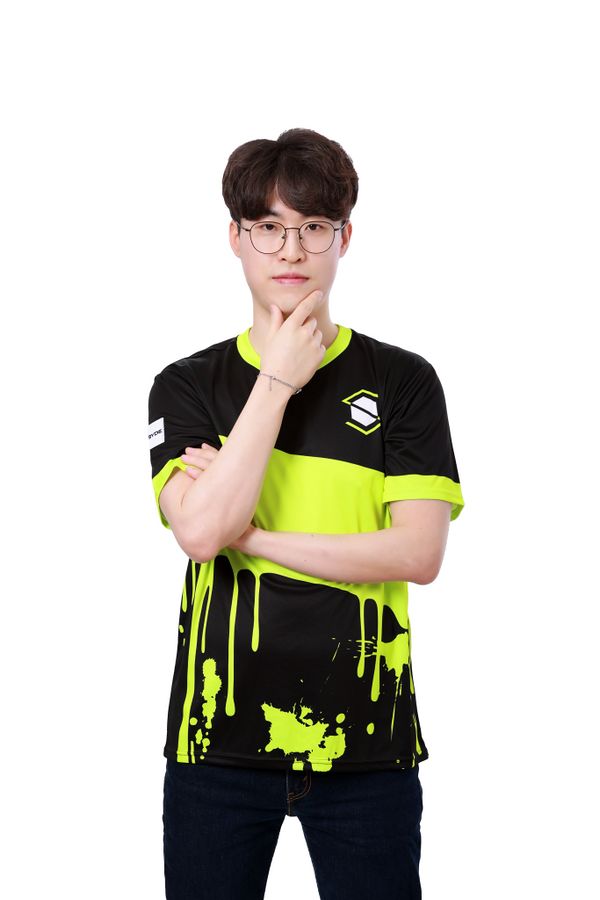 In Brood War, CranK played as a Protoss on SK Telecom T1. He ended his BW career in 2009 and attended the obligatory military service. Already before finishing it in 2011, he was asked by MMA and BoxeR to play StarCraft 2 for SlayerS once he comes back.

Things changed in November 2011, when CranK reached his first finals in ESV TV Korean Weekly #14 defeating KeeN, Dragon, Vampire and TREME. However, he fell to TaeJa in the final (1:4) and took second place. He was on a win streak in ESV TV Korean Weekly #15 as well, taking down Sniper, TaeJa, Dream and TREME, but was stopped by GuineaPig in the finals and ended up with another second place.

CranK played for SlayerS in team tournaments as well. On December 2, 2011, when they faced Millenium in IPL Team Arena Week 13, he beat Stephano but then lost to Adelscott. He appeared in the match versus TyLoo as well but was defeated by Uhen.

On June 7, 2012, CranK participated in the IPL 5 Amateur Championship. He took down Arthur, Royal, Salmosa, Life and in the finals TREME without losing a map. His first place finish earned him a seed for the IGN ProLeague Season 5 as well as paid trip for the event. 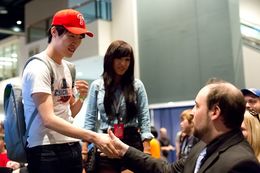 CranK and TotalBiscuit at the 2012 MLG Summer Championship
(Photo:Kevin Florenzano/MLG)

After leaving SlayerS, CranK started streaming while looking for a new team. Seeing as none was picking him up, one of his fans started a crowdfunding campaign on Reddit to send CranK to MLG 2012 Summer Championship,[2] which caught attention of TotalBiscuit and Intricacy. CranK received personal sponsorship for the event - TotalBiscuit covered the flight, transport and accommodation, while redditor donations paid for the misc costs.[3] That later became the starting point for the creation of team Axiom.

CranK participated in the MLG Raleigh Open Bracket where he defeated Spiral, iNcontroL, JimRiSiNg, TubbyTheFat and TT1 without losing a map, and advanced to the Group Play. There, he took down TaeJa and Revival, lost to HerO, then defeated TaeJa again 4:3 in an extended series, and went on to play HerO once again losing 3:4 in a very close match. In the Championship Bracket, he dropped out in Losers Round 6 defeated by Heart 1:2, ending his MLG run at 9-12th place.

On September 26, 2012, it was officially announced that Intricacy and CranK had created team Axiom eSports with TotalBiscuit and Husky as the sponsors.[4] CranK became the first member of the team, as well as its captain.

Crank's performance in Season 1 qualified him for 2013 WCS Season 2 Premier League. He was able to advance from his Ro32 group in second place by defeating both TheStC and HuK. However, he was eliminated in the Ro16 in last place in his group, being defeated 2-0 by Jim and his teammate Alicia. Crank fell to Challenger League where he was defeated 2-0 by Sen. In the Challenger League Group Stage, Crank was able to dominate his group with 2-0 victories over Capoch and Goswser, which qualified him for Premier League in Season 3.

Crank participated in Dreamhack Bucharest on September 14, 2013. Crank started in the second group stage and was able to advance from his group in first with a 3-0 match score by defeating Jeysen, Protosser, and INnoVation. He would unfortunately be eliminated in the third Group stage with losses to ForGG and Jaedong.

However, his focus was slowly moving away from competing. Near the end of 2014, CranK began regular streams in English on his Twitch channel. In March 2015, he received personal sponsorship from NVIDIA as their premier StarCraft II streamer.[5] He also tried his hand at casting in English by being a guest caster at BaseTradeTV for few tournaments.

CranK was playing Legacy of the Void Beta as well and together with Alicia participated in the qualifiers for the first Archon Mode tournament - 2015 Red Bull Battle Grounds: Santa Monica. The first qualifier was not successful as they fell down 1-2 to PiLiPiLi/puCK. However, CranK and Alicia were able to win the second qualifier defeating Heart/Ryung, Armani/Solar and Hack/TheStC, which gave them a seed for the main event.

In August 2015, CranK traveled to Toronto, Canada, to cast a tournament offline for the first time. Hell, It's Aboot Time organized by BaseTradeTV featured four casters (Rifkin, ZombieGrub, CranK and Livibee) who commentated the matches in duos. When CranK was not at the caster desk, he was helping his teammate, Heart, as the captain and coach of Axiom.

One week later, CranK and Alicia played in the main event of 2015 Red Bull Battle Grounds: Santa Monica. On Day 1 they challenged team Reality/Journey and defeated them 2-0. On Day 2 they picked Beastyqt/qxc to be their opponents but lost the match 1-2. They were then chosen by DongRaeGu/TRUE but reflected the challenge to puCK/Bails. Day 3 started with a challenge from HuK/MC whom they defeated 2-1. Then CranK/Alicia had to face Beastyqt/qxc again and once again they lost 1-2. When it was time for CranK/Alicia to pick, they wanted a revenge against Beastyqt/qxc but the challenge was reflected to DongRaeGu/TRUE who eliminated them from the tournament with a 2-1. CranK/Alicia survived to Day 3 of the tournament and finished their run on 4th place, earning $830 for their victories. It was officially the last offline competitive tournament in CranK's career.

He did take part in one more online 2v2 tournament, ASL Gemini 2, with Heart. The team "Axiom Pro Streamers", as they called themselves, took 2nd place, falling in the finals to Patience and HyuN.

On the beginning of October 2015, CranK (together with Olimoley) was planning to travel to BlizzCon 2015, not as a player but a spectator. The donations from his stream were supposed to help him fund the trip. Unfortunately, the plans had to change with the coming news.

Because of past issues with SlayerS, Crank did not have much confidence about his image in the eyes of Korean fans and was mostly focusing on his foreign fanbase. However, the situation was about to change.

In June 2016, TotalBiscuit published the announcement for his new tournament, SHOUTcraft Kings, which listed CranK as the Korean caster for the event. CranK, together with his former teammate Alicia, casted next 4 editions of the tournament in Korean on his personal channel. Thanks to that, he was able to gain popularity among Korean viewers.

In October 2016, CranK officially announced the creation of CrankTV with himself, Alicia and Ryung as its members.[7] The purpose of the channel was creating content for Korean viewers, such as casting StarCraft II tournaments and personal StarCraft II/Blizzard games streams.

On January 19, 2017, CranK published an announcement saying that CrankTV would be closing due to the return of his father's cancer.[8] All three members decided to focus on their personal careers while Crank would also cast some of the tournaments on his channel.

The situation changed about 2 months later when it was publicly announced that CrankTV would be officially supported by Twitch Korea to provide Korean coverage for OlimoLeague and foreign events.[9] The reactivated channel is officially managed by CranK but other players, such as Alicia, Ryung and MMA, often make appearances as co-casters.

On May 15, 2017, CranK announced the beginning of Qué será será Sunday League, weekly tournament with different format every week.[10]