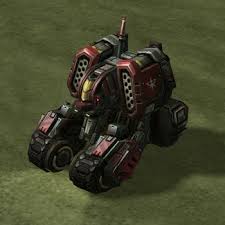 The Cyclone is a fast hit-and-away vehicle produced from a Factory with an attached Tech Lab. It was first introduced in Legacy of the Void.

The Cyclone has an ability called Lock On which does roughly the same amount of damage as its regular attacks, but has a longer range and allows it to shoot while moving. Paired with a high movement speed, this makes the Cyclone a master at kiting.

For 2 years, from Patch 3.8.0 (Nov 2016) until Patch 4.7.1 (Nov 2018), the Cyclone filled a vastly different role: it did not require a Tech Lab, was not designed for kiting but rather raw damage, and was a little sturdier, too. As a result it was the centerpiece of many an early-game push. The Lock On ability was restricted to air targets.

To use Lock On, a Cyclone must move within 7 range of a target. Once the ability is activated, a Cyclone can move away from the target up to a distance of 15 while still maintaining effect. Lock On lasts for 14.3 seconds after activation, but the effect is broken if the target dies, moves out of vision or exceeds the maximum distance of 15. It cannot be cancelled early by any other means. The cooldown of 4.3 seconds starts once the lock is broken or expires.

By default, Lock On is set to auto-cast. Auto-cast will only activate when the Cyclone is not on a move command, and it will only target units (with the exception of Larvae and Broodlings) and combat buildings. Auto-cast will also not target anything already locked onto by another Cyclone. When multiple eligible targets are in range, closer targets are prioritized.

Lock On is an ability and therefore ignores the armor of a targeted unit, but also does not profit from Vehicle Weapons Upgrades: it does a flat 20 damage per shot and delivers one shot every 0.71 seconds (the same speed as its regular weapon attack). The Mag-Field Accelerator upgrade doubles the damage per shot against Armored targets to 40.

Once Mag-Field Accelerator has been researched this is visible on all the player's Cyclones: the model gains two red "head lights". 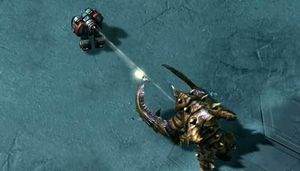