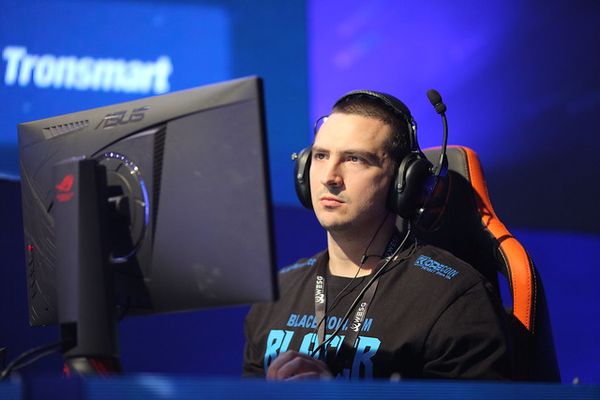 Nowadays, he is also working as a caster.

Born in Chernivtsi City (Ukraine), he is a former Brood War player most notable for taking 1st place at WCG Ukraine in 2008.

During the StarCraft II beta, DIMAGA was positioned in the Platinum League (Division 4), ranked second with a record of 152-59.[1]

DIMAGA enjoyed massive success during the beta. Winning one of each running major weekly tournament by employing a dangerous, aggressive style heavily focusing on Banelings. As a reward for his success, he was invited to Day[9]'s King of the Beta tournament. At the end of the beta, DIMAGA was invited to join a since-disbanded team mTw as a sponsored player.[2]

Although staying primarily in smaller European events, DIMAGA would defeat SjoW and Naama to qualify as part of the World All Stars team sent to Korea to compete in the 2011 GSL World Championship. There he would be the final foreigner to play in the Korea vs. World matches, with July beating four players in a row. DIMAGA managed to hold, beating both July and Mvp, before falling to NesTea in the ace match. He would later get his revenge in the main tournament, becoming the first player to beat NesTea in a televised ZvZ match. Although he would be eliminated in the Round of 8, 1-3 by San, DIMAGA would be the only foreigner to defeat a South Korean player in a best of 3 series.

DIMAGA won the ASUS ROG Summer 2011 in the Assembly in Helsinki. On his way to his first championship at a major live tournament he beat players like MaNa, Stephano and TLO.

DIMAGA managed to qualify for Blizzcon 2011 as one of the representatives from the Russian server. He would play KiLLeR in the first round and beat him 2-1, and then fall to SeleCT in the following round, 0-2. In the lower bracket, DIMAGA would play three matches, beating Brat_OK and TooDming before falling to NaNiwa, 0-2.

DIMAGA was invited to ASUS ROG Stars Invite in November 2011, where he was eliminated in the first round in a tied series against SeleCT. However, DIMAGA played two showmatches at this event. He beat HuK 2-0 and lost to White-Ra 1-2.

DIMAGA'S victory over SarenS in the Go4SC2 ESL Cups not only granted him the prize money, but also qualified him for the IEM Season V - Global Challenge Cologne, the first major live StarCraft II event in Europe. DIMAGA qualified first in his group after defeating SarenS and LucifroN 2-1 but losing 0-2 to HasuObs. He defeated team-mate DeMusliM in the quarterfinals before losing 3-2 to MorroW. He went on to take third after defeating Tarson 3-1 in the 3rd place game. He won many fans during the events with his passionate personality and strong Zerg play, focusing on Banelings and swarming his opponent.

From January 19 to January 22, 2012, DIMAGA participated in the IEM Season VI Global Challenge Kiev. The tournament started off with group stages. DIMAGA was placed in to Group D with Feast, HerO, and qxc. DIMAGA advanced out of his group with a score of 2-1 and headed in to the playoffs bracket. In the playoffs bracket, DIMAGA defeated Pomi and Kas in order to advance in to the finals. In the finals, DIMAGA faced MMA. He put up a valiant effort and put up a great fight, he lost to MMA by a score of 1-3 and ended up in second place.

On February 11, 2012, DIMAGA was invited to participate in the IPL Fight Club. His first opponent was HerO. His debut was cut short as he was knocked out in his very first match up by a score of 0-5, and was not able to dethrone HerO.

DIMAGA was one of the 24 invites for the WCS Europe 2013 Season 1 Premier League. He topped his Round of 32 group with 2-0 wins against Siw and Mvp. He lost to 1-2 ThorZaIN in the Round of 16, but came back with consecutive 2-1 wins against Feast and ThorZaIN to advance second in the group. Against Happy in the Round of 8, DIMAGA narrowly advanced with a 3-2 score against his strong terran opponent. DIMAGA played against Mvp in the semifinals, but this time lost 0-3. Finishing 3-4th, he was able to qualify for the WCS 2013 Season 1 Finals.

At the WCS 2013 Season 1 Finals, DIMAGA dropped out in the Round of 32 after losses against RorO and Revival.

In the WCS Europe 2013 Season 2 Premier League, DIMAGA dropped out in the Round of 32 after 1-2 losses against HasuObs and duckdeok, despite defeating the eventual champion duckdeok 2-0 in their initial match. In Challenger League, DIMAGA defeated BlinG and Beastyqt, but lost again to Mvp in the final round and dropped to the group stage. In a three-player group, he lost to SaSe and Shuttle to remain in Challenger League for Season 3.

After a brief comeback playing for Monolith team, Dimaga was without a team again on September 1st, 2015.[4]