Dark Shrine (Legacy of the Void)

This article covers the current multiplayer version of this building. For other versions see Dark Shrine (Heart of the Swarm) and Dark Shrine (Wings of Liberty). 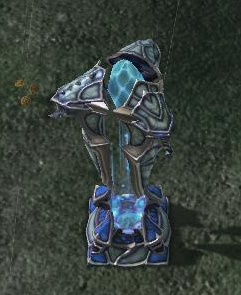 The Dark Shrine is a structure on the Protoss Technology Tree. Its only function is to unlock the powerful Dark Templar stealth melee unit at the Gateway and/or Warp Gate. The Dark Shrine requires a Twilight Council before it can be warped in.

Like most Protoss structures, the Dark Shrine can only be warped in at a location powered by the Psionic Matrix. However, if it loses access to the power field, even an unpowered Dark Shrine still allows the creation of Dark Templar, therefore the Dark Shrine only needs power to initiate its warping in.

Deciding between High Templar and Dark Templar is often a crucial distinction, especially in the mid-game transition. The Dark Shrine and Templar Archives are independent of each other and do not affect the other type of Templar. Therefore the Twilight Council can be considered a branching point of the tech tree, forcing players who are rushing Templar tech to choose between Dark Templar or High Templar; deploying both in the mid-game is virtually impossible due to the high cost in Vespene Gas of both structures and the units themselves. It also means that rushing Dark Templar takes away gas from more sturdy Robotics Facility or Stargate units. So it must be judged that the DT rush will do more damage than it costs, or the Protoss player may fall behind.

The Dark Templar is often used in surprise attacks, and for that reason, hiding the Dark Shrine from enemy scouting can be advantageous to a strategy that uses Dark Templar. However, this should not be relied upon to do damage; the mere diversion of resources to detection should be the focal point of the strategy. Regardless, in an early Dark Templar Rush, it is common that players will try to keep the Dark Templar obscured, this increases the chance that the opponent will delay or neglect to get detection, particularly until after the Dark Templar carry out their first attack. In late-game transitions to Dark Templar, the same desire for subterfuge often means that the Dark Shrine is built in an area unlikely to be scouted by the opponent such as a faraway base; due to the small size of a Dark Shrine, a Probe can easily sneak off into a remote location and build a Dark Shrine and Pylon with relatively low risk of being scouted. That being said, static detectors are more common in the late game, particularly towards 200-supply where they serve as a mineral dump, which reduces the effectiveness of a late game DT switch.