Dark Templar (Legacy of the Void)

This article covers the current multiplayer version of this unit. For other versions see Dark Templar (Wings of Liberty and Heart of the Swarm) and Dark Templar (Legacy of the Void Campaign). 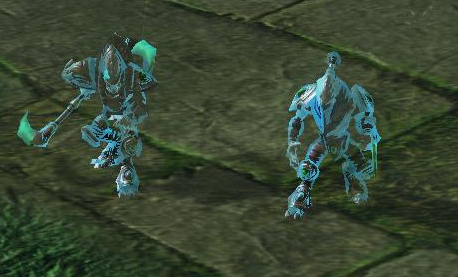 The Dark Templar (often abbreviated to DT) is a permanently cloaked Protoss assassin and a huge disruption to most standard builds for both sides. Dark Templar are warped-in at the Gateway after a Dark Shrine is built. Can Blink like Stalkers to dodge Detectors.

As a melee unit, Dark Templar can supplement Zealots in late-game armies (to punish poor Detection), or they can be used as stealthy assassins to sneak in to enemy bases to disrupt buildings and workers. Although they are fragile when detected, Dark Templars deal huge burst damage - enough to kill any worker in one hit and out DPS a constructing building with only two Dark Templar.

As a permanently Cloaked unit, Dark Templar disrupt most standard builds on both sides. Enemy is unlikely to have reliable Detection to cover more than the mineral line, and the Dark Shrine's long construction time. Failed Dark Templar opening will often change into an Archon & Zealot all-in on one or two bases.

Any combination of two of Dark Templar and High Templar can merge to form an Archon.

If they are not quickly detected and destroyed, even a small number of DT can decimate a large number of workers very quickly. However, Dark Templar require their own tech (Dark Shrine) which is often seen as an unattractive investment as it deviates from the powerful units of the Robotics Facility and does not unlock any units aside from the Dark Templar. On the other hand, Dark Templars do not need any additional research to be fully functional. And, after the opponent has detection, DT can be morphed into Archons.

The Dark Templar see their best use when the Dark Shrine is hidden from scouting to increase their damage to a player's military or economy before they realize they need units or buildings with detection.

The "DT Rush" consists of a quick tech to Dark Templar, and is an effective strategy against Protoss opponents who are late in building detection (Observers, Oracles or Photon Cannons). If the player can warp in Dark Templar before the opponent's Observer or Cannon placed appropriately, the DTs can destroy many enemy probes.

The DT rush is normally "ended" when the opponent's first Observer comes into play or cannons finish warping in. It is worth noting, however, that DTs are powerful units, and can repel small numbers of Zealots even if they are visible. DTs can be used to check for and delay expansions, and to force enemy construction of additional observers by mixing in DTs with a regular gateway army. There is also the danger that DTs can simply snipe the pylon(s) de-powering the buildings that will provide the detector.

Against Stargate openers, notably Phoenix based builds, Dark Templar builds become especially powerful as a Stargate player's only detection is the Oracles's Revelation ability. While Revelation does provide detection, it requires energy so can only be cast when an Oracle has 25 energy, allowing Dark Templar to run rampant in between casts.

Against Terran opponents, the standard build with Orbital Commands gives Terrans access to detection through the Scanner Sweep ability. While the Orbital Command energy is usually used on MULEs, the very presence of the Scanner Sweep increases the risk of using Dark Templar against a Terran; when a Terran realizes the threat, they can save up energy for scans even if a Missile Turret or Raven is not yet available for detection.

However, Dark Templar can be used early game if the Terran player does not realize that Dark Templar are coming. Furthermore, each scanner sweep used defensively represents a significant opportunity cost in the loss of a scouting scan or the loss a MULE and the 225 minerals it could have mined before expiring. As such, DTs can effectively harass a Terran opponent and restrict their economic growth. Terran players will often MULE as soon as the energy is available; an opportune moment to attack with DTs is immediately after the Terran uses the energy for a MULE, denying his ability to scan.

Against the Zerg, Dark Templar are a strong early game option since Overlords are not Detectors by default. To get detection, Zerg needs to build a Spore Crawler (which itself is vulnerable to DT attack). Alternatively, the Zerg player can morph a Lair and then morph an Overlord into an Overseer. Either option arguably requires more time and investment of resources than comparable detection strategies from Terran and Protoss. Since Zerg are often low on gas, Zergs tend to avoid transforming Overlords into Overseers due to the high gas cost and thus leave themselves open to Dark Templar harass and Dark Templar openings.

As in PvP, the PvZ Dark Templar harass typically ends with the opponent's first Overseer. Leftover Dark Templar may be merged into Archons, typically more useful units in the presence of Overseers. Additionally, continued judicious use of Dark Templar can punish Zerg players who do not morph a sufficient number of overseers and/or fail to place them optimally. In particular, late-game DT "drops" into the main base of Zerg can quickly snipe tech buildings.

Dark Templar can activate Xel'Naga Towers. The only indication of the unit's presence in this instance would be the activated tower graphic.