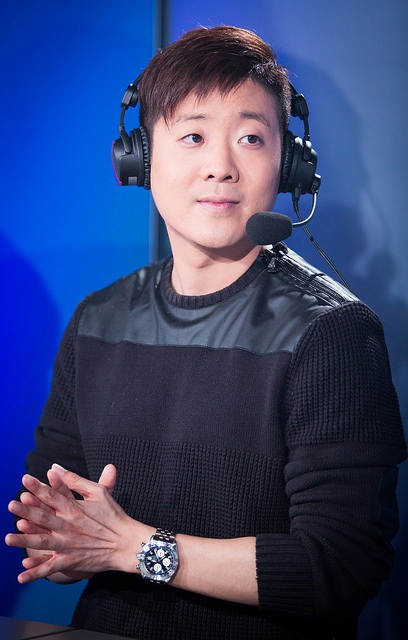 David "dayvie" Kim is one of the world's absolute top Random players. He is a Blizzard Employee, and thus is not allowed to play in tournaments, but routinely plays on the ladder at a high level to test out game balance.

(From left to right) Matt Cooper, Dustin Browder, David Kim, and Greg Canessa hosted the SC2 Secrets of the Masters Panel at Blizzcon 2010.[1][2]

David Kim was born in Korea, and lived there through the end of high school. He then moved to Vancouver, Canada to go to college, majoring in Computer Science.[3] He originally was going to work with a Canadian game developer, as he shortly held a position with Canadian company Relic Entertainment, famous for the Warhammer 40,000: Dawn of War series. But when StarCraft II was announced in 2007 at the WWI, he decided to seek a position at Blizzard Entertainment, and succeeded in winter of 2007. David Kim has always enjoyed Blizzard games, and has even played World of Warcraft as an undead mage. During the development of StarCraft II, he was one of the 50 core developers of StarCraft II, specializing in game balance. He continued to work on StarCraft II team as a game balance designer and moved to new project(Diablo IV) team in April 2017. In April 2021, he left Blizzard Entertainment.[4]

David Kim was a competitive StarCraft 1 player, playing with CuteBoy(gm) as well as ZeuS.[7] His favorite sport to watch on TV is StarCraft. He switched to Warcraft III when it came out, but StarCraft was still his favorite RTS game (and is to this day).

David Kim was generally regarded as the best player in the beta, even though he did not participate in any tournaments. He won all four of Blizzard's "battle reports," which were complete 1v1 matches released by Blizzard during the development of StarCraft II. Also, he was consistently ranked number 1 on the ladders during beta.

In the time right after launch, David Kim was ranked first on the ladder, under the ID dayvie.[8] He continued to hold a top-100 global rank until late December 2010, and since then his global rank has varied (top 500 as of June 2011).