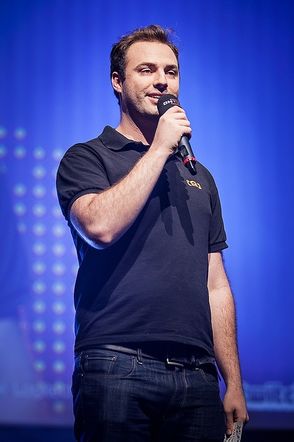 Sean "Day[9]" Plott, brother of Nicolas "Tasteless" Plott, is a well-known StarCraft: Brood War and StarCraft II player and commentator. Day[9] was the host of the popular Day9 Daily show, where he casted and analyzed high level play. With the release of StarCraft II, Day[9] became the face of StarCraft in the growing e-Sports community, as well as a focal point for StarCraft casting and commentating. In StarCraft II, Day[9] plays Random (previously Zerg in Brood War). Day[9] formerly co-hosted State of the Game with JP "itmeJP" McDaniel, Tyler "NonY" Wasieleski, Geoff 'iNcontroL Robinson and Dan "Artosis" Stemkoski.

Day[9] received an undergraduate degree in Mathematics from Harvey Mudd College. On May 11, 2011, he obtained a Masters degree in Interactive Media from USC.

On May 31, 2011, while co-hosting an episode of State of the Game, Day[9] announced that he planned to begin streaming himself playing games once he stopped being "embarrassingly terrible".[1]

He has also been in several podcasts, such as his own podcast on TeamLiquid and MLG's podcast series, where he discusses the game with other players.

As of August 24, 2010, Day[9] was ranked 18th in his division in Platinum League, with a record of 17-4.[2] This was not his main laddering account however, which he tried to keep low profile in order to keep himself from being recognized on ladder.[3] In Season 2 of Wings of Liberty, the Day[9] account had not played any matches in 1v1. However, in 2v2, Day[9] was ranked in Master league. It is mentioned on several episodes of the Daily that Day[9] did not actually possess an account on which he played Random, as was widely believed, but rather 3 smurf accounts, one for each race. He would physically roll a die to see which race he would play. At some point, he had stated that all three of his accounts were in Grandmaster League.[4] However, upon being challenged on this point, he never provided any evidence of this, and it is now widely believed[by whom?] he is at a high masters level.