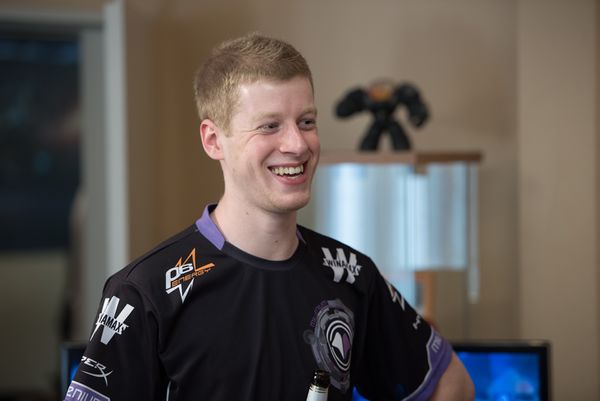 In December 2011, he achieved third place in the PxL-Lan #32, and this was the first time he participated in a notable offline tournament. He was less successful in the eOSL Winter 2012 a few weeks later, as he was swiftly eliminated by biGs in the first round. He attended many of the events in the French Master Series 2011 - 2012, showing consistent performances. He reached the top 4 of the next two events of the circuit, the SC2 Arena #1 where he reached third place and a fourth place at the Spirit Lan 9. In March, he competed in the PxL-Lan #33, where he took third place again after defeating AureS and Adelscott in the winner's bracket, losing to ToD in the winner's final and then to Adelscott in the loser's final.

On March 21, 2012, Dayshi left Imaginary Gaming to join the recently created team Eclypsia.[2] His first event under the Eclyspia banner was the Gamers Assembly 2012, the biggest French lan, where he took fourth place after losses against biGs in semifinals and ReaL in the bronze match. From July 5 to July 8, 2012, Dayshi participated in the World Championship Series 2012 France. Dayshi defeated MoMaN, BsK, and CENSURE, before falling to the losers bracket after losing to Stephano in the semifinals. Dayshi defeated Eeel in the losers bracket and ended up facing Stephano in the finals. He fell to 2nd place after losing by a score of 0-2. This result qualified himself for the European final of WCS, in September. He was discrete in the summer, only playing online weekly cups.

In September, he played at the 2012 WCS Europe, his first international event. He won his first match against Naama but then lost to the eventual winner and fellow French player Stephano, and to DeMusliM in the loser's bracket.

On October 28, 2012, he left Eclypsia to join Millenium.[3] His first offline event with his new colors was the playoffs of the Francophone Championship Season 1, where he lost to NeOAnGeL and SonG, finishing fourth. Alongside ReaL, he reached the final of the HP Trophy 2, notably defeating the reigning champion duo at that time Nerchio and Bly, but lost to the Moreno Duran brothers VortiX and LucifroN in the finals.

The new era of StarCraft II started well for Dayshi as he won the DLcompare.com HotS Cup and all-killed FXO Europe during the qualification for the Acer TeamStory Cup. At the end of March, he played his first HotS offline event, at the Gamers Assembly 2013. He ended up second of the invitational tournament, only losing to his teammate ForGG. In April 2013, he played the playoffs of the Francophone Championship Season 2. Again he lost in the semifinals, against ToD, but this time he was able to overwhelm his bronze match opponent, Adelscott. A week later, he qualified for the Premier League by finishing second of the 2013 WCS Europe Season 1 Qualifier #1, defeating players such as GoOdy, XiGua and his teammate Feast in the process. The qualifier being also a Go4SC2, he played the finals against Happy but lost 2 to 3. He also played in the 2013 GIGABYTE Pro League Qualifier #1 where he won against HyuN, Feast and Goswser before losing to Symbol in the finals, still managing to qualify himself for the main event.

At the beginning of May, he played in the round of 32 of the 2013 WCS Europe Season 1. He was seeded into group F with Nerchio, VortiX and Monchi. He won is first match against the Polish Zerg but then lost to VortiX in the winner's match, and lost the rematch against Nerchio in the decider's match, dropping him in Challenger League.

However in the Challenger League he had somewhat more success. Dayshi was seeded into Bracket 1 in the Bracket Stage. he made short work of his bracket, beating elfi, HasuObs, and Strelok to qualify for the Season 2 Premier League

He was then selected to be part of Team Europe for the 2013 Ritmix RSL gNations. In the first match against the Team CIS, he was sent out first and was able to secure 3 victories against LoWeLy, White-Ra and sLivko before eventually falling to TitaN. In the winner's final, he was again the first player for Europe, but lost straight away to HyuN, who all-killed the team. In the rematch against the team CIS, for the loser's final, he was sent out against TitaN but lost. In the grand-final, he was once more the first player to be sent out and he was able to defeat Dragon, Sage, TheStC and YugiOh before falling to HyuN. In both games he was only one win away from securing an all-kill, leading the European team to winning the tournament.

Dayshi also showed strong performance in team leagues, during the Acer TeamStory Cup, where he scored two all-kills against Quantic Gaming and MVP, defeating HyuN, StarDust, Center and Hwangsin for Quantic and DRG, NAKSEO, TAiLS and Billowy for MVP.

In June 2013, he entered 2013 DreamHack Summer, his second Dreamhack event. He went through the three groupstages, defeating notably Goswser, MaNa, Suppy on his way, before losing 2 to 1 in a close series against LucifroN in the round of 16.

In 2014, he started to confirm himself as one the best European Terran players. He achieved Ro16 at WCS Season 1 and Ro32 at WCS Season 2.

His achieved his first important result in a Premier Tournament at HomeStory Cup IX, where he achieved a shared 3-4th place. During the event, he eliminated great players like Bomber and Armani.