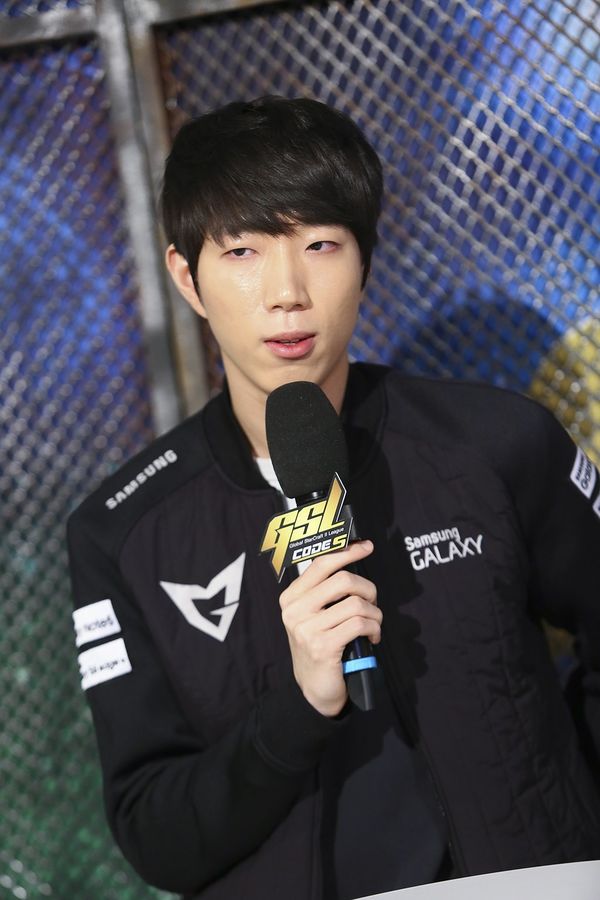 He is currently serving his military duty.[1]

On July 23, 2012, Dear participated in the 2012 South Korea WCS Preliminaries. Dear received a BYE in round one and then took down Leta, Bomber, JangBi, and faced sC in the finals. He was not able to advance any further as he lost to sC by a score of 0:2 and took 2nd place.

On June 26, 2013 Dear participated in the WCS Korea Season 2 Qualifiers. He received a BYE in round one, and then beat Fury, Light, and Pet to qualify for Challenger League.

Dear qualified for the 2013 MLG Spring Championship through the Kespa Qualifiers. He won the Group C bracket, beating Solar, hyvaa, and jangbi, among others, for the spot. At the main event, Dear was placed into Bracket 7 in the Winners Bracket. After beating Nathanias, TheStC, and Stats he managed to beat qxc 2-1 to advance directly to the Final Bracket. After scoring an initial victory over Jaedong he lost 0-2 to Polt and then NaNiwa to be knocked out the tournament. His final record was 10-5 and he achieved a 5-6th place finish.

After defeating ByuN and losing to Flying in Challenger League, Dear played in the Season 3 Up and Down matches. In a five-player group, he won his first three matches against Curious, MarineKing, and Swagger, which was enough to secure him a spot in Premier League. After defeating SuperNova twice in the Round of 32, Dear defeated DongRaeGu and Sleep to reach the quarter finals. He defeated his team mate Trap 3-0 and the previous season's champion Maru 3-1 to reach the finals against soO. After a 4-2 victory over his opponent, he became the third Protoss player to win a GSL championship ans the second GSL royal roader after Life.

Dear played in the WCS 2013 Season 3 Finals on October 25–27 in Toronto, Canada. He defeated HerO, lost to Oz, then defeated HerO again to advance to the bracket stage. Similarly to his WCS Korea run, he defeated his first opponent MC 3-0 and his semifinal opponent Maru 3-1 to reach the finals against Soulkey. With a 4-0 score, he became the third consecutive player to sweep his opponent in a WCS Season final and the first player to win both a regional final and a season final. He also made the 2013 WCS Global Finals, where he beat TaeJa before falling just short against Jaedong in a nail-biting finish. On December 19, he was announced as the first Korean to join Mousesports.

Dear started the 2014 WCS season with a Code S seed in 2014 GSL Season 1 as a result of his performance in 2013 WCS Korea Season 3. After losing his first match against Dark 1-2, he narrowly managed to emerge from his group in the Round of 32 by defeating YongHwa 2-0 and getting revenge on Dark 2-1 in a close series. In the Round of 16, Dear was placed in a group of death containing every 2013 WCS Korea champion (Soulkey, Maru, and himself) and Zest. Dear managed to defeat Soulkey in his first match 2-1, but lost to Maru in the winner's match 1-2. He was then defeated by Zest 2-1 and dropped down to Code A.

His next major appearance was at ASUS ROG Winter 2014 where he topped his group with a 6-0 record to Snute and JonnyREcco. In group stage 2, he came in second to StarDust with a record of 8-6 knocking out TaeJa and KrasS. He went 3-1 with KrasS, then 2-3 to StarDust and finally 3-2 with TaeJa. Having reached the quarterfinals, he would face Apocalypse. He ended up defeating him 3-2 to advance to the semifinals against ForGG. He defeated ForGG with a score of 3-2 and battled with San for the title. However in the finals Dear got completely shut down with 0-4. However the second place spot was worth $5000 and 500 WCS points.

With his WCS points he got an invite to IEM Season VIII - Cologne and was seeded directly into group stage 2 facing off against Patience, jjakji and qxc. He however failed to qualify, with an over all map score of 3-4, having lost to jjakji 0-2, winning against qxc 2-0, then losing to jjakji once again but this time with a score of 1-2.

He successfully qualified for IEM Season VIII - World Championship going through the open bracket notably taking out Jaedong, Leenock and Hasuobs. Seeded into the Ro16, he faced off against HerO. He won the series 3-1 and advanced to the RO8 where he was defeated by Polt 2-3.

Dear tried to qualify for HomeStory Cup IX in the Korean Qualifier but dropped out in the quarter finals by losing to Armani 0-2. On his way there he defeated PenguiN and a barcode both with 2-1.