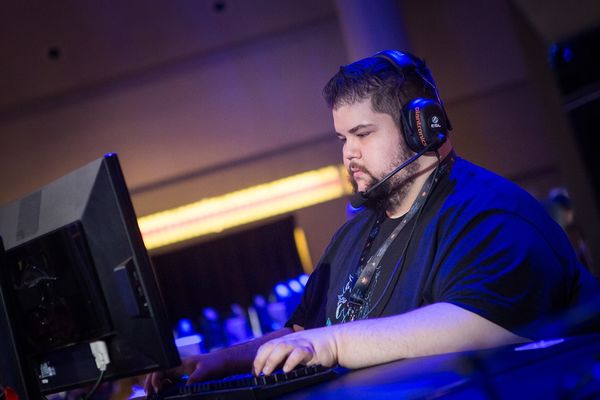 desRow's first venture into the RTS genre was with StarCraft: Brood War, but it was not until the release of Warcraft III: Reign of Chaos that desRow became a competitive player. Despite achieving a decent skill level at the game, especially during the Frozen Throne era, he had no notable competitive achievements for that game. For various reasons, desRow quit playing Warcraft III competitively and began playing DotA and he joined various semi-pro teams. He finished 2nd in an ESL Master cup series with that team. desRow in StarCraft II is an active streamer and known more for streaming rather than his exceptional tournament results.

desRow began playing for VT Gaming in November 2010 as part of the B Team. He attributes most of his current successes from the time he spent in this team. He stated that if was not for the support of this team he would not have begun streaming, This marked the beginning of desRow's career as a professional StarCraft II player.

Even though desRow began playing StarCraft II: Wings of Liberty during the beta phase and consistently reached Blizzard's Top 200, his first notable victory came only in 2011 when he won the US Go4SC2 Cup #21 against NGry. The very same day, January 9, 2011, desRow announced that he would start streaming his games and coaching players.[1]

On May 2, 2011, vVv Gaming recruited desRow because of his dedication to the game and outstanding play.[2] Although before the end of the month, desRow was signed by RAGE.eSports. This move was prompted by RAGE promising to send desRow to all MLG tournaments and that his participation in the MLG open bracket for the upcoming Anaheim tournament would be guaranteed.[3] He decided to leave vVv because of confusion about the lengths to which they were going to pay for his MLG costs which he mentioned in his 10th Vlog: reflecting on his year in 2011.[4]

On August 21, 2011, desRow competed in the TeamSpeak TL Open 21, making it through the bracket from the round of 1024 beating notable player HwangSin to play IdrA in the semifinals, ultimately losing 1-2.

On November 7, 2011, desRow joined Team Legion,[5] after discussions with the team for roughly a week. His move from RAGE was prompted as the team owner did not pay his expenses that had been promised and was no longer able to be contacted.[4] In the same week he announced that his stream had been sponsored by MaxFrag. As a result of this sponsorship he was going to host a $50 and $100 show match every month. He set himself the goal of rank 1 Grandmaster as a goal for the near future. His training method included note taking of the contents of his games (timings, builds etc.) while stating that although playing in tournaments was more entertaining for viewers he felt this would distract from his goal.[6]

desRow held true to his word and began the sponsored show matches opening with the player qxc; He lost 3-0.[7] The show matches were briefly put on hold because the caster desRow had found, RotterdaM, had other casting priorities and did not have the time to cast the show matches. They were to resume mid December with show matches with Destiny and a viewer voted Protoss player showmatch.[8]

On December 12, 2011, it was announced that desRow would be going to Korea, to stay at the GOMTV Foreigner House until March. His goal was to improve as a player and to qualify for the Code A tournament. He planned on staying in Korea until his skill level was high enough that he could compete in international events.[9] He would then move into the "Psw" clan house sponsored by his team, also in Korea, after his time in the GOMTV Foreigner House was over in March. His show match series would be upgraded to instead of playing North American players he would play with Code A to begin with and if he wins versus these players he would try and get show matches with Code S players by using the contacts that Khaldor has in Korea. He announced a subscription model for his TwitchTV stream which would be $5. Subscribers would receive: exclusive access to a South Korean player replay pack and his build order notes from those games, no advertisements on stream, a custom stream chat icon, and fan games on Sundays with desRow himself.[10]

In a vlog on 30 December 2011, desRow voiced concerns that his team did not have the means to support him financially because of a lack of sponsors. However, they were providing excellent moral support. He would still be moving to the South Korean team Psw's team house in March if all went according to plan.[11]

The show match series continued through December in Korea with players such as Golden[12] and Revival[13] casted by Wolf and Apollo respectively. He had his eyes still set on qualifying for the GSL Code A tournament flaunting successes such as playing Curious, Maka and YongHwa on ladder and in practice games. He was focusing on GSL maps, for the qualifiers, with these players.

On January 14, 2012, desRow announced with ToD that they would start up "JToD", ToD's old streaming program but this time with desRow participating. This program would stream a laddering session while having guests on Skype ask him questions. It was split into two parts: part 1 was ToD playing and was in French, part 2 was desRow playing and was in English. This happened every Sunday at 7PM CET.[14] Recently, desRow stopped doing this show and ToD continued on his own.

On January 27, 2012, it was announced that desRow left Team Legion.[15] He left because of the lack of facilities in the PSW clan house; Players were forced to sleep on the floor because there were no beds. The team was asking for a fee that was "ridiculous" [16] desRow was confident that this would not hinder his performance and was still performing well on ladder and in practise. In the mean time desRow continued to live in the GOM house while he searched for a new team.

His search was not long as this new team came in the form of Eclypsia. He was recruited to the team on April 1, 2012.[17] He participated in the Code B qualifiers; He lost to Moon 1-2. He is going to stay in Korea and his team was going to send him to the Autumn MLG. He chose to miss earlier MLGs so that he could practise more and hopefully do better in that MLG.[18]

It was announced on SLoG's Twitter on May 12, 2012 that desRow had left Eclypsia along with teammates Artist, SLoG and Scarlett.[19]

On May 16, 2012, desRow was featured in an interview with Team Dignitas.[20] He detailed the reasons behind leaving Eclypsia and his plans for the future. His reason for leaving with three other team mates was due to the team's increasing lack of interest in keeping players in Korea to practise. He said that he was looking for a team that had connections in Korea or the ability to support him in going to MLG tournaments but Korea was his priority.

On May 17, 2012, desRow announced that he would return to Canada on June 6.[21] In a Vlog he later went into more detail about leaving Korea and why this move was needed for himself as a person rather than a StarCraft II player. He said that he needed an income and his current income was only streaming. When he did stream he would need to stay up all night and never see the sun. He said that he was a morning person and it was becoming tiring being up all night and never seeing the sun. He expressed that even if he found a South Korean team, that he could continue living in Korea, he would still need to stream as a means of income.[22]

Around 9 March 2012, Cytoplasm was streaming his ladder games in the GOM house while showing his webcam. In the background a person, later known to be LastShadow, is watching over the shoulder of Cytoplasm. desRow appeared from off-screen and was involved in an altercation with LastShadow. The clash moved off screen and Shuffle is seen moving to break the two up.[23] In an interview with Team Liquid desRow clarified the reasons behind the incident: He said that LastShadow had "made his life unliveable" and was bullied about his weight and skill level in StarCraft II, among other things. Also, that he did not punch LastShadow as previously speculated[24] and no one was hurt. He claimed the fight was uneventful after it moved off camera.[25]

Immediately after returning from Korea, desRow participated in the MLG Spring Championship 2012, beginning in the open bracket round 1. He stated in an interview with Team Liquid that he had no expectations going into the tournament, other than to try and show that his time in Korea had paid off.[25] He wanted to lose to two South Korean players so as to avoid taking flak for being unable to defeat a foreign player; which are generally thought of as weaker in comparison with the South Korean players. He lost in the second round of the Open Bracket to SaSe, 0-2. He dropped to the Losers' Bracket and faced KawaiiRice; he was defeated 0-2 and out of the tournament.

On 6 June 2012, Speaking in terms of a new team, desRow said the he is waiting to receive an offer from an already well established team. He acknowledges the stigma that he "team-hops" and wants to find a team that he can stay in for a much longer period of time than his previous endeavours. He has had offers from teams which he has not accepted.[26]

In desRow's 21st blog, which he posted on 20 July 2012, he confirmed that he would be attending the MLG Summer Championship 2012. He was able to do so since viewers had donated $1000 which covered a large portion of his expenses. He also announced that he would be reviving his show match series, which would initially be 6 show matches. He would begin by facing Dragon the following Wednesday (2012-07-25) and would be casted by Axeltoss.[27]

desRow lived in the Ministry of Win gaming house in Warsaw, Poland for three months.[28]

desRow's first significant result in Heart of the Swarm came on September 20, 2013, when he qualified for the WCS America 2013 Season 3 Challenger League. In his final match, he defeated the Korean Protoss from Quantic Gaming Venus with a 2-0 score. desRow then qualified for WCS America Premier League Season 1, 2014 by defeating Korean Terran Apocalypse, in his Challenger League match, by 3 games to 1.

The JonSnow and desRow rivalry is a very heated one in which is currently leaning heavily one direction. desRow is a very talented North American Protoss who over time has made work out of the Zerg JonSnow. Looking at the players side by side and their results, they would appear to be a very evenly talented match, but the match between the two say very differently. For whatever reason, desRow has continued time and time again to have JonSnow's number. First defeating him in the 2014 WCS Season 1 America: Ladder Wildcard 2-0. Then again, desRow managed to defeat JonSnow 2-0 in the Fragbite Masters 2014 Spring. desRow continued onto 6-0 when he was able to win again in the IEM Season IX - Shenzhen 2-0. In the Copa América 2014 Season 2 JonSnow was finally able to take a map off of desRow, but still fell 1-2. This rivalry is a prime example supporting the theory of mental blocking, where seemingly evenly talented players go completely one sided favoring one over the other.