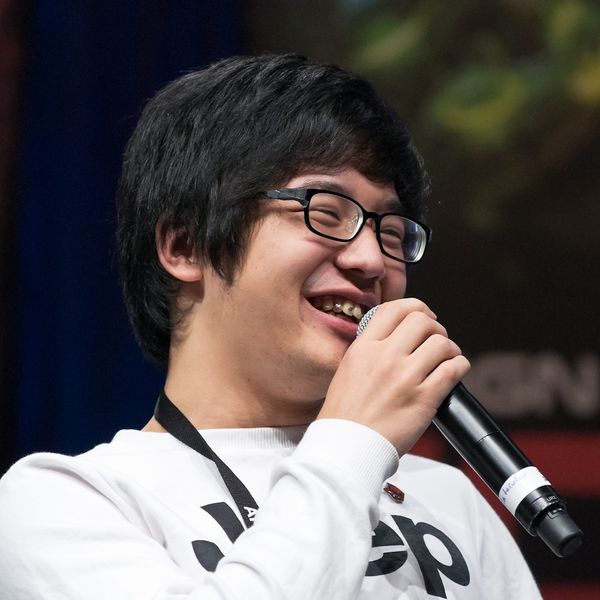 Jeon "Dragon" Yong Soo is a Terran player and caster from South Korea who is playing for Team YP. Dragon is a former high-level Brood War player who played under the ID "Mio,"[2] which he continued to use in StarCraft II: Wings of Liberty as a member of the clan WeRRa. In May 2014, Dragon founded the Dragon Invitational Tournament series.

Although Dragon joined SlayerS in 2010, he wasn't able to move into the SlayerS team house for some time due to his work commitments. He stated on his stream that he would enter the team house on October 26, 2011 but wouldn't be allowed to stream anymore. As of December 2011, Dragon was back home, having resumed streaming again. Destiny announced a YouTube partnership where he would upload VODs of Dragon's stream.[3] In January 2012, Dragon left SlayerS to put aside professional gaming for a while to fully focus on work,[4] but after a change of mind decided to look for a new team.[5]

On March 6, 2012, it was announced that Dragon had joined team Millenium.[6] On May 3, 2012, Dragon arrived at the Millenium team house to practice there for the months to come. In June of that year, he received a sponsorship from GeIL Memory to promote GeIL's Black Dragon RAM.[7] He left the French team on December 3, 2012.[8] After leaving Millenium, Dragon joined Meet Your Makers along with fellow Korean and former WeRRA teammate PhoeNix.[9] 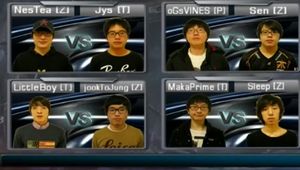 Dragon (Jys) up against NesTea in his first GSL.

Three weeks after WeRRa's dissolution in October 2010, Dragon (under the name "Jys") qualified for the GSL Open Season 3, showing remarkable play against Season 2 winner NesTea but falling in the round of 64 with a score of 2-1.[10] Dragon was added to the SlayerS roster on November 30, 2010, along with former WeRRa teammate Cella, shortly after his performance in the GSL Open Season 3. While Dragon was finishing his military service, BoxeR mentioned practicing with Dragon, then playing under the ID Seo Yeon Ji, to improve his TvT in a GSL Season 2 interview.[11]

Dragon attempted to qualify for GSL 2012 Season 2 Code A but fell to KangHo (then going by LosirA) 2-1 in the quarterfinals of the qualifiers.

In Week 14 of the IPL Team Arena, Dragon was fielded by SlayerS against TyLoo but lost in his match to Uhen.

On February 28, 2012, it was announced that Playhem would be sponsoring Dragon at IGN ProLeague Season 4 in Las Vegas, Nevada.[12] At IPL, Dragon played in the open bracket, reaching the round of 16 of the winner's bracket by defeating RxNinja before being sent to the loser's bracket by Code S player GanZi 2-0. Dragon then made it to round four in the loser's bracket, defeating PanzerRH and more notably Team Liquid's Haypro 2-1 along the way before being eliminated by former Code S player Swagger (then going by Killer) 2-0.

Dragon was invited to the first Lone Star Clash in Austin, Texas. He played viOLet in the first round, losing 2-0. Dragon then dropped to the loser's bracket and was eliminated by Destiny 2-1.

Dragon played for Millenium in the Evil Geniuses Master's Cup Season VII, an online team league, falling to ViBe of It's Gosu in week 3. He later lost to HasuObs of mousesports in week 4 and DeParture of Fnatic in week 6. 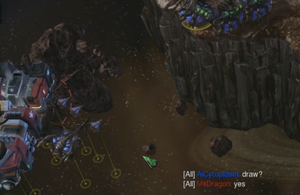 Dragon's game against Cytoplasm, which lasted almost an hour and ended in a draw.

Dragon played in DreamHack Open: Summer 2012 in Jönköping, Sweden. He went undefeated with a score of 6-0 in Group Stage 1, defeating Zuth, Megashira, and Team Liquid's Snute. In Group Stage 2, Dragon was eliminated from the tournament, defeating Fade 2-0 but falling 2-1 to both Cytoplasm and MorroW. Dragon's game against Cytoplasm on Antiga Shipyard, which ended in a draw, was given an honorable mention in TeamLiquid's Best Games of 2012.[13]

Dragon attempted to qualify for TeamLiquid StarLeague in the TSL 4 Qualifiers, defeating Pokebunny in the first round but falling to LaLuSh in the round of 16. He was defeated in the second qualifier in the round of 32 by mycerion.

Dragon came within one game of qualifying for ASUS ROG Summer 2012, defeating Bischu and Brat_OK before falling in the final match to Bly. In the second qualifier, Dragon defeated viPro but lost to Suppy in the following round.

Dragon competed in the MSI Pro Cup #7, defeating ToD 2-1 but falling to Polt 0-2 in the quarterfinals. In May 2012, Dragon displayed strong performances in the ESL EU GO4SC2 Cup, first winning Cup #195 and later taking third place in Cup #197. In GameCreds Cup #57, Dragon reached the quarterfinals but lost to GoOdy. Two days later, Dragon fell to Nerchio in Antec Attack #15, also in the quarterfinals. Dragon also participated in Eclypsia Cup #1 but fell in the group stage to biGs, Bly, and Welmu. In the ESET Summer Masters Open #3, Dragon reached the finals but narrowly fell to KroLu, taking second place in the tournament.

Dragon left Meet Your Makers on April 1, 2013 after its StarCraft II team disbanded in order to focus on League of Legends. About a month later, Dragon was announced as a member of the Clarity Gaming team.[15] While on Clarity, Dragon competed in various weekly and premier tournaments. In September 2013, Dragon was announced to have joined Core Gaming as a result of an agreement between Core and Clarity Gaming's Chief Operating Officer, Mike Orlani.[16] However, it was determined that Orlani did not have the proper clearance to release Dragon from his contract with Clarity. The issue was satisfactorily resolved for both teams with the decision that Dragon would remain on Clarity Gaming until the expiration of his original contract.[17] Dragon left Clarity in December 2013.

Dragon competed in the Iron Squid King of the Hill, challenging reigning champion DIMAGA and defeating him 2-0. Dragon then won two more series against ToD 2-1 and CatZ 2-1 before falling to ForGG 2-0, ending his 3-match win streak. His performance tied him with DIMAGA for the second-longest win streak in the event.

In December 2011, Dragon attempted to qualify for HomeStory Cup IV but fell to RevTime in the Korean qualifiers.

On June 21, 2013, Dragon played in the main tournament of HomeStory Cup VII. In Group Stage 1, Dragon defeated TLO 2-1. In the winner's match, Dragon lost to Seed 2-0, and was eliminated by TLO 2-0 in the final match of the group.

On June 28, 2013, Dragon participated in the 2013 MLG Spring Championship, where he fell in Round 1 of the winner's bracket to CatZ with a score of 2-0. In the loser's bracket, Dragon defeated Mewtwo and binski before being eliminated by ThorZaIN 2-1 in round three.

On March 8, 2014, Dragon participated in the No Dice Gaming Invitational #1, defeating South Korean player Hunter 3-2, before falling to Team Liquid's TaeJa 0-4 and taking second place. Later that month, Dragon competed in the No Dice Gaming Invitational #2, losing to HyuN 2-0 in the first round. He then defeated GSL champion Seed 2-0 before falling to Hunter 1-2 in the Losers' Finals and taking third place.

On April 30, 2014, Dragon participated in the No Dice Gaming Invitational #4, falling to Revival 2-0 in the opening match. Dragon managed to defeat South Korean player Pink 2-1, showcasing an uncommon style of mech TvP before falling to StarDust 2-0 in the deciding match.

In April 2013, Dragon attempted to qualify for GSL 2013 Season 1 Challenger but fell to Guilty in the round of 16 of the qualifiers. In July 2013, Dragon reached the finals of the WCS America 2013 Season 2 Qualifier, winning ten consecutive games against Ranchinator, LaserJSC, Petraeus, SeleCT, and Comm before falling to Arthur 0-2. The next year, Dragon competed in the WCS Europe 2014 Ladder Wildcard Qualifier but lost to Bischu in the round of 16.

Dragon competed in the American qualifiers for IEM Season VIII Shanghai, where he defeated desRow in the first round before falling to the loser's bracket to Sound. He was then eliminated from the tournament by Golden.

On March 24, 2013, Dragon competed in Home Clash II, defeating Harpner and Hanfy before falling to Welmu with a score of 1-3. The next month, he reached the semifinals of an EnerJ Cup Series tournament, winning 6 rounds against opponents including Turuk and Noname before losing to DIMAGA 2-1 in the round of 4. 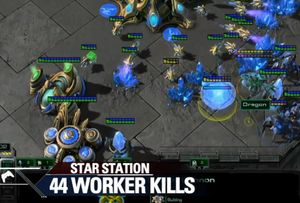 Dragon's hero banshee in his showmatch against White-Ra.

In May 2014, Dragon expressed an interest in becoming a caster. He began his casting career by founding the Dragon Invitational Tournament series and commentating the games in English. In June of that year, Dragon acquired Mechanische Tastatur as a sponsor for the tournaments.

On May 30, 2014, Dragon announced the second Dragon Invitational Tournament, also featuring a $2,000 prize pool and 16 players invited by Dragon. It was played from June 9 to June 12, 2014 and cast in English by Dragon and his former coach, Cella. In Tournament #2, INnoVation managed to defend his title, defeating Life in the finals 3-1.[22]

On June 23, 2014, Dragon announced the third Dragon Invitational Tournament, again featuring a $2,000 prize pool and 16 players invited by Dragon. It was played on July 8, 13, and 14 and cast in English by Dragon. In Tournament #3, Life managed to reach the finals for the second time, defeating Leenock 3-2 to take the title.[23]

Under the account name Seo Yeon Ji, Dragon participated in A1 KotH, where he finished first in the September 2010 overall ranking. Based on this result, he was invited to play in the A1 StarCraft II Tournament #2 which invited the top 6 players from KotH along with 2 other players. In the first round of the tournament, Dragon played against TheStC and won. Soon after the match, TheStC wrote in PlayXP that “Seo Yeon Ji used absurd counter build order without scouting. I know that Seo Yeon Ji is MioWerra’s account and MioWerra has been doing stream-cheating online.”[25] When he joined SlayerS, Dragon admitted to listening to a live stream of the tournament during his match when BoxeR asked him about TheStC's accusations.

After speaking with TheStC and members of WeRRa, Dragon publicly apologized to TheStC, members of oGs, and WeRRa, stating that "he was sorry for what he had done."[26] Later, in response to allegations of match fixing, Dragon stated that he would “never dream of other tournaments, televised matches, or pursue a career as a pro-gamer,” but no match fixing was found to have occurred and Dragon returned to professional gaming after being cleared of his charges.[27][28] WeRRa’s clan master, Gundam, and vice clan master, Cella, apologized for the controversy concerning Dragon, and Dragon was released from WeRRa. WeRRa disbanded a month later after an unrelated scandal surrounding its clan master, Gundam. After leaving WeRRa, Dragon joined SlayerS clan. He succeeded in qualifying for GSL Open Season 3 in November 2010 despite his earlier promise, for which Dragon apologized. In response to Dragon's apology, Mr. Chae of GomTV released a statement explaining that no action would be against Dragon.[29] Dragon played his GSL match against the previous season's champion, NesTea, and was eliminated 2-1.

Dragon played against Destiny at the Lone Star Clash, losing 2-1. Dragon then challenged Destiny to a showmatch at the IPL4 mainstage during an interview, which Destiny accepted. Destiny convincingly won the showmatch 4-0. After the loss, Dragon stated that he would be practicing harder on the Korean server to beat Destiny the next time they met.