DreamHack Winter 2011 was a 64 player StarCraft II tournament held in Jönköping, Sweden. The total prize pool amounted to 400,000 Swedish Kronor. The tournament was the culminating event of the 2011 DreamHack Sapphire AMD Championship series. The finals and semifinals were played at the Kinnarps Arena, which had the capacity to seat over 4000 fans.[1] The games were cast in English by Apollo, Artosis, Day9, MrBitter, Tasteless, and TotalBiscuit.[2] 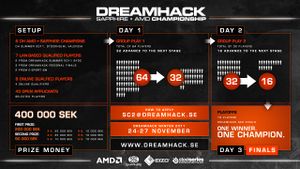 Out of the 64 players who will participate in the tournament, 6 have been determined by past DreamHack results, 7 qualify from DreamHack regional qualifiers around Europe, 8 qualify from Online Qualifiers and 43 are selected based on an open request system.

Click [show] on the right to view Group Stage #1

Click [show] on the right to view Group Stage #2