Drone (Legacy of the Void) 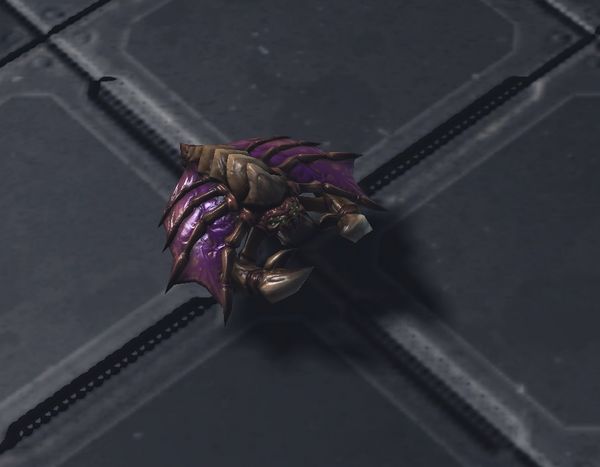 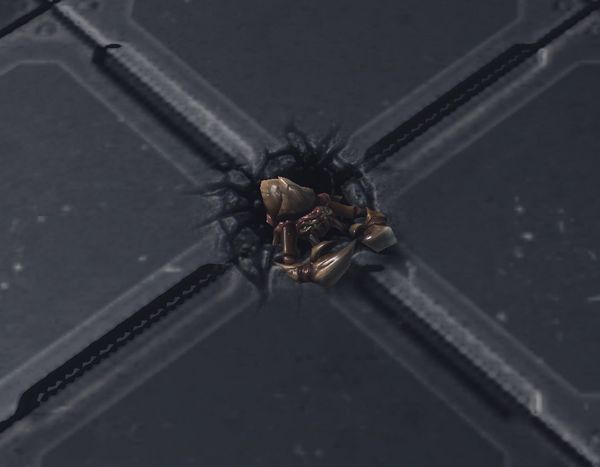 The Drone is the basic worker unit for Zerg. It can harvest Minerals and Vespene Gas as well as build any Zerg structure at the cost of its life. Drones differ from Probes and SCVs in that they can only slowly regenerate health as opposed to the fast recharging shields of the Probe or the repairable 45 hit points of the SCV.

The Drone is the only Zerg ground unit other than the Broodling that does not receive a speed increase by walking on Creep.

A major change in LotV: A player starts with 12 Drones. In LotV the speed of all units were changed.

A Drone is frequently used for scouting. The most commonly used scouting timing is at 13 or 14 supply when doing a fast expand (not necessarily hatchery first). In some situations, scouting Drones are used to steal one of the two Vespene Gas Geysers of your opponent, to limit their gas income or simply because the Drone is trapped and soon to be killed.

A Drone will win in a fight versus an SCV provided it attacks first. It will always win in a straight fight with a Probe, even if the Probe attacks first, because the Drone regenerates its health during the battle, which allows it to take one more hit than the Probe.

Prior to Patch 1.4.0, the attack of the Drone had a slight delay between the beginning of its attack animation and the actual damage being dealt.[1] Thus, killing a constantly moving worker (such as one blocking the placement of a fast natural expansion) required microing the pursuing Drone, or pulling two Drones to pursue.

In all match-ups, Drones can be morphed into buildings and then canceled allowing a player to exceed the supply cap as a Drone morphing in to a building no longer counts as a unit for the purposes of supply.

There are a few uses for this, the most notable example of which is the Extractor Trick. A second use for this is morphing a large number of Spine Crawlers when a Zerg player has reached the 200 supply limit. This will allow the creation of additional combat units with the free supply, before cancelling the buildings to exceed the 200 supply limit. This can also be done with Spore Crawlers as a cheaper alternative, although you have less time to cancel the buildings, and Spore Crawlers are generally less useful in large numbers if you fail to cancel them.

Drones can be used to repeatedly delay the often crucial second gas of Protoss by canceling the Extractor and rebuilding it. Additionally, once the standard Gateway/Cybernetics Core/Zealot wall-in has been established, a Drone can mineral walk through the Zealot to scout. Drones are also commonly used to deny any attempts of a Protoss to early expand.

Drones can be the main defence against early aggression or Bunker pressure. If an Overlord or Drone scout discovers a Bunker being built, multiple Drones can be pulled from their mining tasks to attack the SCV or any incoming Marines.

Drones can be used to build Spine Crawlers as defense when attempting an aggressive cheese against Zerg. With mineral walking and proper micro, Drones can fend off early Zergling rushes with minimal losses.