The dual tournament is a competitive format typically used in the group stage of a tournament.[1][2] It was used during StarCraft OnGameNet Dual Tournaments and OnGameNet Starleague (OSL) preliminary tournaments, starting as early as the qualifiers of the 2002 SKY OSL. It is commonly used to this day, such as the GSL (often referred as GSL Style Groups), as an alternative to the traditional round-robin format.

A visual representation of the dual tournament format is below: 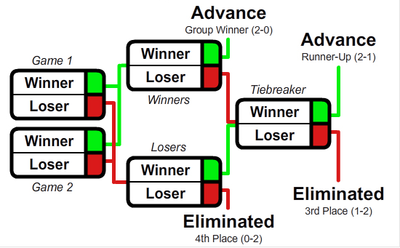 The format is as follows:

One of the main advantages of this format is to avoid matches with no stakes. Every match has consequences, as even players who have lost their opening matches have an opportunity to place in the top two by defeating opponents in the Loser's or tiebreaker matches.

A notable advantage of the dual tournament format is its brevity. It features five matches versus the six of the round-robin. Additionally, the dual tournament format does not necessitate extra games beyond the predetermined five, whereas in the round-robin, it is common to see multiple players ending play with tied records, thus resulting in at least two additional tiebreaker matches, if not more.

This format is traditionnally show as a group stage, but it can also be represent as a double-elimination bracket, as seen below :