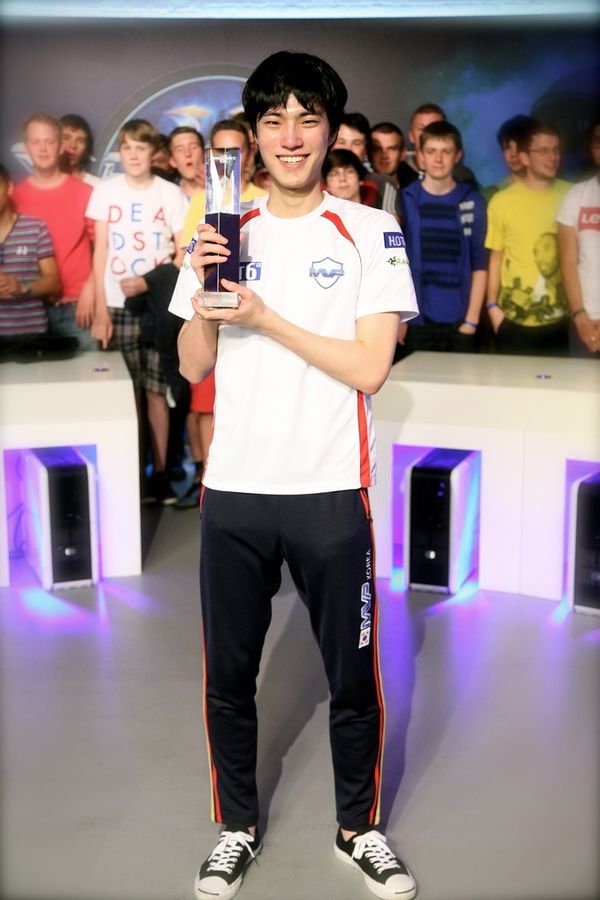 Duckdeok participated in the Korean StarLeague Daily where he managed to win KSL Week 2 Day 4, defeating all his opponents 2-0. Duckdeok showcased his skills when he came out in the KSL Opening Ceremonies Semifinals match against oGs, where he was able to take out TheStC, jookTo, SuperNova and ForGG, before finally being stopped by MC, allowing his team to easily close out the series 6-2.

Duckdeok has also played in a number of Teamleagues for coL.MvP. He has appeared in IGN ProLeague Team Arena Challenge 1 a number of times and was able to take out players such as SLush, SeleCT and KiLLeR.

duckdeok qualified for GSL Season 4 by winning the EWM Season 3 Finals. His first opponent was the Brood War legend Jaedong, who had recently dropped down from Code S after receiving an invite. In a mild upset duckdeok defeated him 2-0 with 2 sentry/immortal all-ins.

duckdeok would find himself sent to the up and downs after a 0-2 loss to the StarTale Terran Hack however he would win his group 4-0 defeating Terrans Happy, Heart, and Sparta as well as the Team 8 Protoss Sang to secure his position in code S for 2012 Global StarCraft II League Season 5.

Duckdeok made his code S debut in 2012 Global StarCraft II League Season 5, where he was placed in Group A with TaeJa, Polt and PartinG. He would beat TaeJa 2-0 in his first match, taking him to the Winner's Match of his group. There, he dropped both of his games against PartinG, before losing 2-1 to Polt in the final mach, dropping him to Ro32 in Code A.

In 2012, Duckdeok debuted in the GSTL in the GSTL 2012 Season 1 group playoff against FXO, where he was able to finish the series by taking out three consecutive members - Leenock, Oz and GuMiho.

On December 8, 2011, Duckdeok participated in the KSL Daily Week 2 Day 4. Duckdeok started off from the quarterfinals. Duckdeok took down Freaky and Hack in order to advance to the finals. In the finals, Duckdeok defeated IceCream by a score of 2-0 and grabbed first place.

On June 29, 2012, Duckdeok participated in the EWM Season 3 Week 4. Duckdeok received a BYE in round one and then went on to take down GGF, Revival, Whale, and YongHwa to advance in to the finals against sC. Duckdeok defeated sC by a score of 2-1 and advanced in to the EWM Season 3 Finals where he would have a shot to obtain a Code A seed if he won against the other weekly winners.

Duckdeok qualified for the 2013 WCS Season 1 Europe Challenger League, where he had a difficult start to his WCS career, losing 0-2 to HasuObs in the first round of the bracket stage. He was able to narrowly advance to the 2013 WCS Season 2 Europe Premier League through the Group Stage, losing to Bunny 1-2, but defeating KrasS 2-0 twice.

The Round of 32 did not start off auspiciously for duckdeok either, when he was dominated by DIMAGA in his first series, and lost 0-2, but recovered to defeat Dayshi 2-1 and then won the rematch with DIMAGA 2-1 to advance to the Ro16. Despite advancing, duckdeok received some criticism from the casters for his style of play, as he attempted a 1 or 2-base all-in in every game he played. As a result, duckdeok was an underdog coming into the Ro16 when he was placed in a group with last season's runner-up Stephano, who had gained fame with his seemingly unbeatable Swarm Host style in ZvP, PvP expert Welmu, and LucifroN, who was at the time considered the best non-Korean Terran player. Duckdeok surprised many by decisively beating Stephano 2-0, but lost 1-2 to Welmu in the Winners' Match, leaving him to battle LucifroN for a quarterfinals spot. Tied 1-1, duckdeok opted for an extremely risky fast 3-nexus build on Whirlwind, and seemed on the verge of falling to Challenger League to a 2-base all-in when he miraculously turned the tide of battle despite having LucifroN's army in his main base with many of his Gateways unpowered. In a post-game interview, duckdeok said that he was sure he had lost the game, and, perhaps somewhat modestly, credited his victory to luck.

In the quarterfinals, duckdeok was matched against NaNiwa. According to ToD, duckdeok was extremely confident before the match, predicting he would defeat NaNiwa 3-0. In fact, duckdeok won 3-1, repeatedly crushing NaNiwa's hidden tech builds with straightforward 1-base aggression. After narrowly edging out Grubby 3-2 in the semifinals, duckdeok advanced to play his countryman MC in the first WCS mirror match finals. After a tense, back-and-forth series, duckdeok prevailed in the decisive Game 7, recalling several of his quarterfinals victories over NaNiwa when he easily crushed MC's proxy Oracle build with a 1-base Stalker attack. Duckdeok was extremely emotional after his win, in sharp contrast to the guarded attitude he had throughout the tournament, which he attributed to having won a major tournament for the first time in an almost three-year StarCraft II career.

This accomplishment qualified duckdeok for the WCS 2013 Season 2 Final, where he won a rematch against his WCS Europe quarterfinals opponent NaNiwa 2-0 in his first match, but went on to lose 0-2 to both TaeJa and then in yet another rematch with NaNiwa, thus failing to advance past the group stage.

On November 23, 2020, after almost 7 years since his original retirement and 3 years after retiring from his Heroes of the Storm career, duckdeok has announced that he would be coming back to competitive StarCraft II. [1]