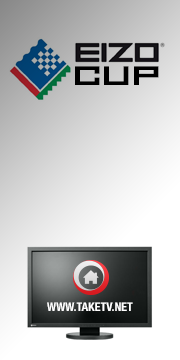 The EIZO Cup is the third series of Cups organized by starcraft2tv.de. Till now it was played online every month and streamed by TaKe.

250 EUR are spread among the players as seen below:

Finals were played in two groups, both groups included 6 players. The first place of each group was placed in the semi final. The 2nd and 3rd place were placed in the quarter final.

For the first final, a prize pool of $2,000 is spread among the players as seen below: