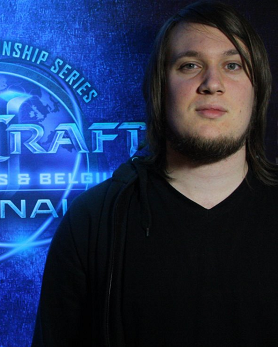 Antoine "ELVIS" Paquay is a Zerg player from Belgium who is retired.

ELVIS has a Warcraft III background, but never played competitively.[1]

ELVIS started playing to StarCraft II at the end of the Beta, and then mainly competed in online weekly events.

ELVIS was part of Team Sypher's initial roster created on August 10, 2010. He left the team in October to join the amateur Bulgarian team MD Games, which he later left for the Belgian organization Gameline.be.[1][when?] On August 29, 2011, he followed his manager Taip in team BLAST.[2] Only three months later, he left the team because of tensions between him and the staff.[3]

In December 2011, ELVIS qualified for the eOSL Winter 2012, which was his first participation in a notable event, after his victory in the second Open Series. His entry in the tournament was quite a success, as he swept his compatriot Feast 3-0 in the first round. ELVIS was however no match for his next opponent, the two-times defending champion SarenS, who cleanly eliminated him.

On March 1, 2012, ELVIS was announced as the first player of team Eclypsia, where he was committed to partner with manager Taip again.[4][5]

July 22, it was announced that ELVIS left Eclypsia.[6] He ended up staying in the team. Five days later, on July 27, ELVIS left Eclypsia for good.[7] In the 11th January 2013, ELVIS joined BeNeLux-based organization LowLandLions.[8]

On May 13, 2012, ELVIS participated in the World Championship Series 2012 Belgium. After defeating Fauvent in the first round, ELVIS lost to Orly in the second round and fell to the losers bracket. After overcoming Veni, Arcane, Makouni, ELVIS faced Orly again in the finals but fell to 2nd place with a score of 0-2.