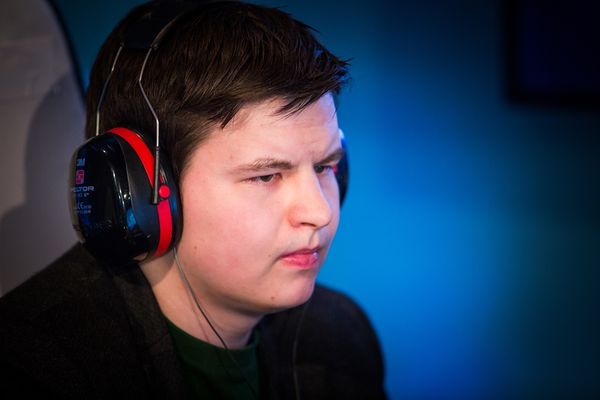 Samuli Sihvonen is a Finnish Protoss player and one of the best performing Finnish SC2 players. elfi is commonly believed to be the second best known Finnish player with many major tournament appearances and results under his belt.[1]

elfi is commonly thought of as a "slow" player, APM wise. Grubby for example said that "- - he is too slow to be good".[2] Ironically elfi has beaten Grubby, and many Korean players, like MC for example, who are commonly believed to have really fast mechanics. Some people still regard his playstyle cheesy: elfi's playstyle has evolved a lot, and he has no trouble taking the game to the late game. Any mistakes by the opponent early game will be punished, however. elfi made a name for himself as "the PvP master", but currently elfi believes that it's not his strongest match-up. elfi is known to perform funky and original builds, which often receive attention by casters.

elfi started playing competitively in around 2005.[1] He used to be one of the best Finnish Warcraft III players, playing under the ID "elfittaja" and representing teams such as Fnatic. He won the Finnish WCG qualifier in 2008.[3] elfi has been concentrating fully on playing StarCraft II competitively since its launch.

elfi started his professional StarCraft II career by being picked up by Power Gaming as the first player for their roster. Soon after recruiting elfi Power Gaming also signed NaNiWa, who only 6 days later decided to join Team Empire instead. elfi remained the only player in Power Gaming until March 11, 2011, when Power Gaming transferred him to Virus Gaming for an undisclosed fee. When he joined the team, he explained that he chose them to be able to train with their Finnish players, such as Satiini and Sein.[4] In August 6, 2011, elfi reached the final of WCG 2011 Finland Qualifiers, therefore securing a spot in World Cyber Games 2011.

One month later, on September 6, elfi left Virus Gaming, because the team couldn't afford to pay for his travel expenses for the foreign events he had qualified for.[5] On September 9, it was announced that elfi joined Team Acer.[6]

On October 4 elfi took his first major prize pool by placing 2nd at IEM Season VI - Global Challenge Guangzhou. This came after a strong group stage where he went 6-0 defeating IdrA, Jim, and Jinro. He went on to meet IdrA in the finals of the tournament after defeating Strelok and HasuObs, but was unable to defeat him for another time and eventually lost by a score of 3-1. He subsequently competed in the next IEM event, IEM Season VI - Global Challenge New York, after a tough bracket during the second qualifier which had him facing Stephano, Adelscott, and Tarson. In New York elfi won his group but was knocked out by a score of 3-2 in the quarterfinals by KiLLeR.

From November 4 to 5, elfi participated in the ASUS ROG Stars Invite in Finland. His opponent in the first round was the reigning MLG champion, HuK, who was one of the favorites to win the event. Nevertheless, elfi defeated him, and proceeded to the semifinals where he met SeleCT, who knocked-him out. elfi defeated White-Ra by a score of 3-1 to take the third place at the tournament.

June 2, it was announced that elfi had left Team Acer.[7] He picked up a personal sponsorship from ASUS ROG, SteelSeries, and SETT.fi. His contract with Team Acer was going to end in three months, and therefore elfi announced that he was not staying in the organization under his current contract. Due to contract negotiations Acer did not send him to any of the upcoming DreamHack Summer, DreamHack Valencia or DreamHack Bucharest events as the season concluding event, DreamHack Winter, was held after the time his contract ended. After negotiations both parties agreed to end elfi's contract earlier, in late May, to offer elfi the chance to participate upcoming events. elfi started playing under personal sponsorship by ASUS ROG, SteelSeries and SETT.fi. His gametag became ROGǂelfi, standing for Republic of Gamers, elfi's primary sponsor.[1]

During the time of his personal sponsorship he participated in the ASUS ROG The GD Invitational. During group stages he managed to defeat MaNa in a deciding game to determine who advance from group stages to the quarterfinals. In the quarterfinals he defeated LucifroN 2-0 to advance to the semifinals where he defeated TLO 3-1. In the finals he faced off against ThorZaIN where he fell in a close 5 game series 3-2.

Late November, 2012, elfi Tweeted the following: "It's time to start looking for team now. My current contracts are ending soon and I miss team action". Why, and when exactly his contract ended is unknown, but according to elfi both parties agreed that it was best not to continue the contract.

On July 28, 2012, elfi participated in the World Championship Series 2012 Finnish Nationals. After defeating Fuzer in the first round, elfi lost to Protosser and fell to the losers bracket. Elfi then went on to take out Satiini, Serral, imakki, and then got his revenge on Protosser by defeating him 2-0. After defeating Welmu, elfi went on to face Naama in the finals where he managed to win the first series 2-0 but lost 1-2 in the second series after becoming one game point away from victory, and finished 2nd place overall, while notably having a winning record against every opponent he versed in the tournament. As only one Finnish player could qualify, he fell short and did not qualify for the 2012 Battle.net European Championship.

The first major Heart of the Swarm tournament that elfi participated in was Dreamhack Stockholm 2013. Although he advanced at the top of his Stage 1 group, over Adelscott, Flo, and Gowerly, he came last in his group in Stage 2. Despite his promisig earlier performance he was only able to take a single map off of ziktomini and lost 2-0 to HyuN and Puzzle.

elfi initially tried to get into the Premier League through the Premier League Qualifiers, but the closest he got would be the quarterfinals of the bracket on Day 4 where he was eliminated 2-0 by TargA. Trying his hand at the Challenger League Qualifiers elfi again had little success until the third day, losing twice to DarkHydra and once to Brat_OK. However, on May 12, 2013, the last day of qualifiers, he was able to beat Spirates, Sonder, Monsteuh, and TargA to qualify for the Main Tournament.

Although he quickly dropped out of the bracket stage after a 2-1 loss to Dayshi, elfi was able to qualify for the Season 2 Premier League through the group stage. After initially losing 2-0 to beastyqt he scored back to back 2-0 wins against monchi and then SaSe to advance.

In between WCS seasons, elfi made his way to Sweden for the Dreamhack Summer Open. After getting out of his first group without dropping a map, elfi found himself in much more difficult group in Stage 2, going up against Ret, Goswser, and Jaedong. Although he lost to Jaedong, he was able to 2-0 both Ret and Goswser to advance to Stage 3.

elfi landed in one of the closest groups of the third stage with Tefel, TaeJa, and ThorZaIN. TaeJa, Tefel, and elfi would tie three ways for first place, with each having a 2-1 match record. However elfi would be eliminated as he had the worst map score of the three at 4-4.

elfi was placed in Group A in the Round of 32 along with Mvp, Tefel, and beastyqt. After losing his first match to Mvp 2-0, he was able to get back to the fifth match after beating beastyqt. Unfortunately, he would lose there to Tefel, thus dropping down to the Challenger League.