Energy is an attribute of certain units and structures, which accumulates over time and is spent to activate (some or all of) the unit's or structure's special abilities (spells). 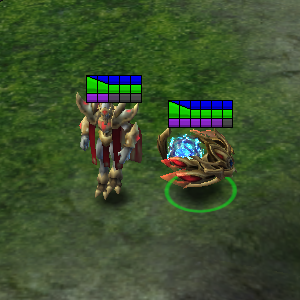 A Sentry and a High Templar, with their energy bars (purple) showing.

Energy is represented in-game by a purple bar below the health and shield bars (assuming status bars are displayed).

Units with energy generally start out with 50 energy and slowly build up energy over time to a maximum of 200. Energy is passively generated at 0.7875 energy per second on Faster speed (0.5625 per second on Normal speed).

The exceptions to the above are:

Most spells only cost a fixed amount of Energy to cast. Cloak (Ghost & Banshee) and Pulsar Beam (Oracle) are ongoing spells that cost an initial amount of energy to activate and also drain energy so long as they are active. The Shield Battery & Medivac spend energy proportional to the amount of shields/health they restore.

Behemoth Reactor was removed from the game in Patch 3.8.0 when the Battlecruiser's abilities were switched to cooldown timers rather than energy.

Caduceus Reactor was removed from the game with the release of Legacy of the Void.

Khaydarin Amulet was removed from the game in Patch 1.3.0.