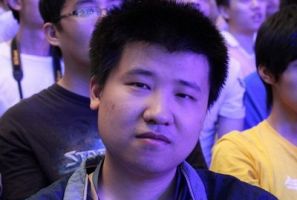 Sun " F91" Yifeng is a Zerg player and a member of the casting group SCBoy from China. He is also taking a player-manager position in Team SCBoy.

As a veteran player, F91 has had numerous achievements in Brood War, especially in Chinese tournaments. For a long time, he was considered the top Zerg in China and was nicknamed the 江南狗王 or Zergling King of Southern China. In 2009, he was invited to play in Teamliquid's Liquibition tournaments, where he achieved 5 straight victories, and remained undefeated until the end of Liquibition, garnering him much attention in the Teamliquid community.

Despite being a Chinese player, F91 was specially invited to play in TSL2, which he would have to fly out to Taiwan for to play in the tournament. Due to time constraints, F91 needed to place in the top 12 of the open iCCup ladder to be seeded directly into the second round. Near the end of the laddering stage, F91 was unable to finish in the top 12, and resorted to abuse, and was subsequently disqualified and banned from Teamliquid events for a year.[1] Additionally, he was banned from competing in TSL3.

F91 was considered a good SC2 player in China, but not to the same extent as his Brood War dominance. His best finish was the Ro8 of the 17173 World Cup, where he lost 1-3 to Maka after defeating White-Ra 2-1.

The team Duskbin opened its SC II squad on November 5, with F91 as their leading member.[2]

On June 5, F91 left Duskbin with his future uncertain at the moment.[3]

On the 20th of June 2011 it was announced that F91 would be joining team Nirvana as the sole player to help rebuild their StarCraft II division.[4]

He got 2nd place in WCG China in 2011 after losing 1-2 to XiGua and has secured his spot to compete in the Grand Finals in Busan.

In the Blizzcon Chinese Qualifiers, F91 was expected to put up a strong performance but lost 0-3 in his Round of 16 group consisting of WP, Jim, and MacSed.

On October 31, he left Nirvana and joined the clan Dream. A month later, on December 7, he announced that he is now a member of Dream's progaming team.[5]

At WCG 2011 Grand Finals he went 4-2 in a close group which consisted of players such as Socke, Sen, elfi and mOOnGLaDe. He was tied with Socke but advanced because he beat him earlier. He managed to eliminate DarKFoRcE before being defeated by fellow Chinese Zerg XiGua.

He has qualified for NEO Star League Season 1 Round of 16.

He was among the finalists in the 2012 World Championship Series-China.

From May 27 to June 10, 2012, F91 participated in the IPL 5 Chinese Regional Qualifiers. To start the tournament, F91 was placed in Group B. After advancing through his group with a score of 2-1, F91 advanced into the elimination bracket. In the elimination bracket, F91 went on to take down Comm and Jim and advanced into the finals to face XiGua. He wasn't able to advance any further and had to settle for second place after he lost to XiGua by a score of 1-4.

At the end of 2012, while F91's team, Phoenix (team), transferring to Zenith of Origin, he decided to go to amateur status, marking the ending of his 10 years progamer career. But he would still be an active figure in the Chinese StarCraft Scene.