FE 4 Starport (vs. Protoss) a.k.a The Anti-Colossus build 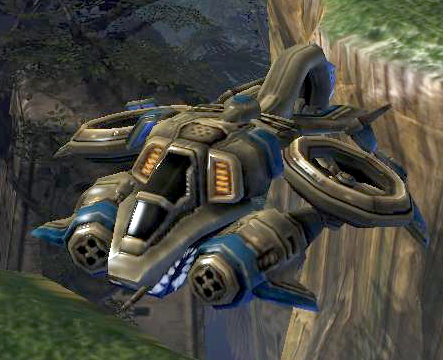 A mid-game Sky Terran style build for aggression and surprising the Protoss usual Colossus-based death-ball. With early Bio-centric pressure the opponent will be expecting the normal Marine, Marauder, Medivac follow-up but instead the Terran uses four fast Refineries to four Starports producing Banshees to catch the opponent with a poor unit composition for Starport units, outright dominating a poorly prepared opponent expecting a Bio style Terran.

The goal of this build is to reach a critical mass of Banshees before the opponent can prepare enough anti-air units or Phoenix to counter Starport units. The tech switch to four Starports is done after expanding, but Banshee production time does not make the attack as swift as some may prefer. Viking numbers can be mass-produced faster making this build slower than the current standard 14 Viking (enough to 1 shot a Colossus); but this allows for a much easier transition to Battlecruisers - and Banshees with cloak are more maneuverable than Vikings.

The dust clears, and all that's left are 8-10 cloaked Banshees wreaking havoc in the enemy base. The engagement should last literally 20 seconds tops. GG. More Banshees and Marines should be following this up for a quick and easy clean up. Colossi problem solved.

An initial two or three Battlecruisers before any Banshee will make the initial attack devastating against a Phoenix counter and Void Rays will be destroyed quickly by Marines.

With Void Rays, they are expensive units and slow so chase down stray Void Rays with Marines it will be worth the trade. Ttheir army composition is not nearly as scary as Phoenix-based one, pump out a couple rounds of Vikings to deal with them and do not let them flank Battlecruisers.

When you move out with 4Port Banshee push, add a 3rd Command Center and Fusion Core; be sure to start upgrading Ship Plating as soon as the Armory is finished. Three mining bases are needed to support Battlecruisers from all four Starports, and prevent the build from turning into a slow-paced all-in. It's all about finding the right mix of Battlecruiser to Banshee ratio. General rule of 2 Banshees and 2 Battlecruisers with Marines and Marauders is economically sound.