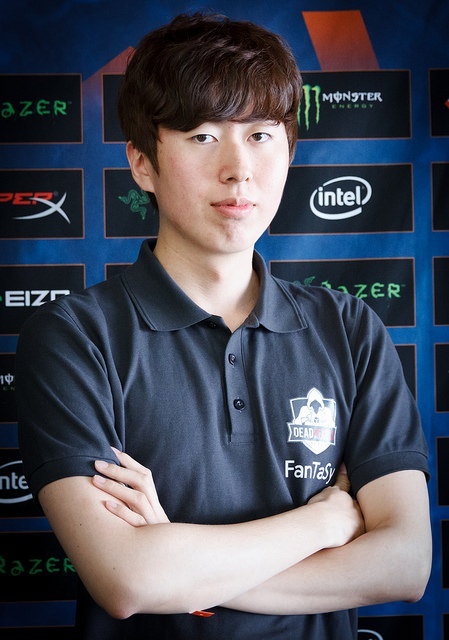 FanTaSy made a name for himself as one of the best Terran players of the last seasons of the Brood War scene, and won the 2010 Bacchus OSL. He also made it to the last two OSL Finals, in each of which he was defeated by Jangbi. He has transitioned well into Starcraft 2; whilst his Proleague performance in 2013 has been a little underwhelming, he qualified for the first Heart of the Swarm Code S, and went out showing very impressive games against TRUE and TaeJa.

FanTaSy played his first SC2 official match during the hybrid 2011-2012 Proleague Season 2.[1] FanTaSy was one of the eight KeSPA-affiliated players to be sent to the KeSPA exhibition match at the 2012 MLG Spring Championship.[2] He was knocked out in the quarterfinals 0-2 by Soulkey.

FanTaSy used a previously unseen build in professional SC2 with a build order that began to be called the FanTaSy Build[Citation needed]. This BO was also used by Mvp at HomeStory Cup V.[Citation needed]

FanTaSy made it through the Code A qualifiers of the last GSL season in 2012 to make it into Code A. He beat SuHoSin in the final round of the qualifiers with a score of 2-1 to make it. In Code A he reached the final round before losing to RorO, falling to the Up and Down matches. There he went 2-3 and ended fourth in the group to drop back to Code A.

In GSL 2013 Season 1, he was again unable to pass Code A, defeating Zenio but losing to Shine from Team MVP. In the Up and Down matches, he was able to qualify for the Premier League of the first season of WCS 2013 Korea by going 4-1 in his group.

In the first GSL using the new expansion Heart of the Swarm, FanTaSy was seeded into the Up and Down stage due to his Code A run in last season's GSL. He was seeded into Group C with Maru, KeeN, NesTea and HerO. He finished second and advanced beating KeeN, NesTea, losing to Maru and finally beating HerO. In Code S, he was placed in Group D with TaeJa, Losira and TRUE. He was knocked out in last place losing 1-2 to TaeJa and 1-2 to TRUE, thus he was sent back down to Challenger. In the second bracket, he played Solar whom he beat 2-1, and Avenge who knocked him out of GSL Season 1 with the score of 1-2.

In Season 2 of the OSL, FanTaSy had to play in an Up and Down group to be able to advance to Premier League. He was placed in Group B with Savage, Trust, YoDa and Golden. He advanced in first place winning over YoDa, Trust and Golden. In Premier, he was placed in Group E with Losira, JangBi and Life. He advanced in first place winning over Life and JangBi in the best-of-one series. In the round of 16, FanTaSy was placed in Group C with Rain, First and Hyvaa. Unfortunately, he was knocked out in last place losing 0-2 to First, 1-2 to Hyvaa and 0-2 to Rain. With this loss, he was sent back to Challenger to fight for his Premier League spot. He was matched up against Dream, a Terran, and lost 0-2. With this loss, he would have to compete in the Up and Down bracket following season.

In the Up and Down bracket of GSL Season 3, FanTaSy was placed in Group D with DongRaeGu, Trap, Squirtle and YugiOh. He went 1-3 in matches and was sent down to Challenger, his only win was against YugiOh. In the first bracket of Challenger League he played against Mekia, aka Impact, and was able to win 1-2. Next, he played RagnaroK and won, but this time with a score of 2-0. Finally he played against Sleep who came down from Premier who he was able to defeat 2-1 and was sent up to Premier League for the following season.

In Season 2 of the 2014 GSL, FanTaSy achieved a similar result, falling in a group stage. Although he placed third in his group, it was a Code A, not Code S. He went 1-2 against MyuNgSiK, beat eMotion 2-0 then lost 1-2 to Leenock. Although he did not achieve great success overall, FanTaSy displayed meta-changing games in Proleague, especially against Life.[3]

On September 11, 2014, he announced that he declined to re-sign a new contract with the team SK Telecom T1 and wished to live new experiences.[4] He officially left the team on September 30.

Two months later, on December 11, it was announced that he joined the Swiss team Dead Pixels.[5]

FanTaSy's 2015 run started promisingly, as he managed to qualify for both the 2015 StarCraft II StarLeague Season 1 and the 2015 Global StarCraft II League Season 1. He fell flat in the Ro16 of Starleague, despite showcasing a solid build and strong late game in TvP against Super and Terminator. Despite him carefully defeating Rogue in a first series, a loss to MC and a revenge from Rogue would see him eliminated in the Ro32 of the GSL.

FanTaSy was however able to qualify for the IEM Season IX - World Championship, where he would, to the casters surprise, 3-0 former team mate Rain in convincing fashion. He was denied facing his old Brood War Nemesis Flash by an aggressive Trap who then managed to 3-2 him as well.

In Season 2, FanTaSy failed to qualify for Starleague, but a 3-1 over Pigbaby would bring him into 2015 Global StarCraft II League Season 2: Code S. There he would beat soO and Rogue 2-0 each, displaying not only impressive form but one of the closest games ever played in StarCraft history.[6] In the Ro16 however, he suffered two 2-1 losses to Rogue and was eliminated.

FanTaSy then qualified for the GiGA internet 2015 KeSPA Cup Season 1 where he defeated Zest in a close series. He was afterwards matched against Dark to whom he lost 3-2 displaying some of the best late game vs Zerg of the year. He afterwards flew to Tours for the DreamHack Open where, despite a promising run, he was be cut off by HyuN.

FanTaSy once again qualified for KeSPA Cup, entering the 2015 KeSPA Cup Season 2 to face off against Dark once again. Both players showcased impressive skills but after the dust settled Dark stood triumphant with a 3-2 victory despite impressive strategies tailored for the new maps introduced by FanTaSy. In the GSL, FanTaSy would sweep San 3-0 to advance to 2015 Global StarCraft II League Season 3: Code S. There, he went on to lose 2-1 to Dear, defeat Sleep 2-1, and lose to ByuL 2-0, having him in an uncomfortable spot for BlizzCon. In order to muster sufficient points for a running chance, he travelled to 2015 DreamHack Open: Valencia, where he lost 3-2 to team mate Patience in a wild series. In desperate need for WCS points, FanTaSy went to IEM Season X - gamescom where he was able to reach the group stage. There, he went on to defeat Lilbow and INnoVation, giving the Binary Terran his last TvT defeat in HotS and only series loss in the tournament. FanTaSy then took revenge on Patience and lost a close series to soO. FanTaSy's last chance for BlizzCon was at 2015 DreamHack Open: Stockholm. There, he reached the Ro16 but lost to his greatest WCS points rival HyuN who himself managed to reach the finals of the tournament and therefore tying FanTaSy for points.

In the end, FanTaSy and HyuN had to play a Bo5 to determine who would go to the WCS Global Finals. After a hard fought battle, FanTaSy emerged victorious and qualified for the 2015 WCS Global Finals. There he would lose to herO 3-1, ending his HotS career and preparing to go into LotV.

On June 7th, 2018, FanTaSy announced his return to StarCraft II. [7] FanTaSy's first offline tournament after coming back from military service were the 2018 GSL Season 3 Qualifiers. He didn't make it into Code S however, falling to Hurricane and KeeN on day 1 and Rushcrazy on day 2. Shortly after however he was invited to HomeStory Cup 17.