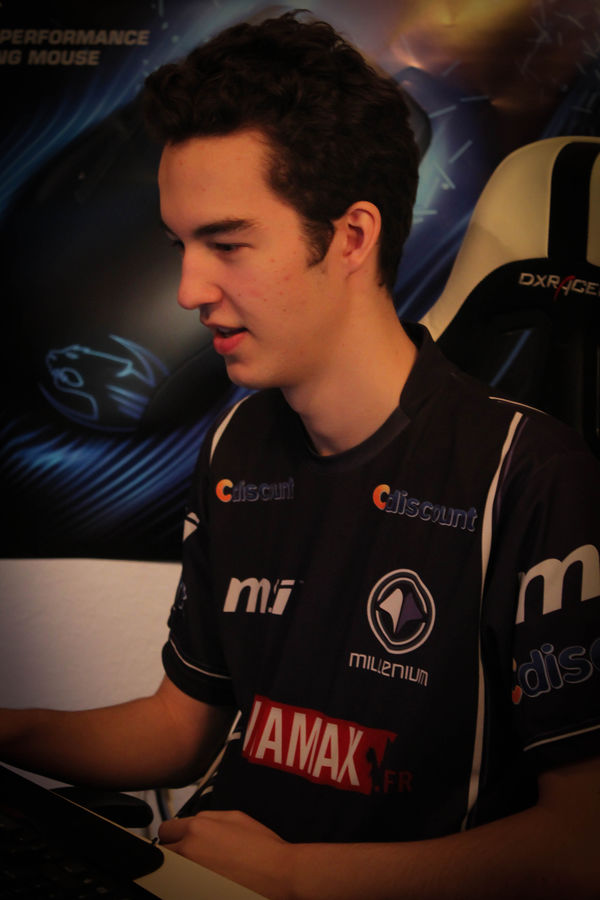 Feast was on Millenium, but went on an indefinite break and resumed activity in November 2013,[1] and left Millenium on the 5th of December.

Feast, alongside his coach BoKuRa and his teammates Reave, Fargo and Nbs, left Team Sypher for against All authority in April 2011.[2] Immediately after joining, he competed in: the two last offline events of the French Master Series, the Gamers Assembly 2011 and the NeXeN 2011, where he respectively reached quarterfinals and semifinals.

On October 27, 2011, it was announced that Feast, as well as his brother Reave and their manager BoKuRa were parting ways with aAa.[3] Two days later, he signed for Millenium.[4]

At the end of 2011, Feast managed to qualify for two events of the Intel Extreme Masters Season VI, the Global Challenge Kiev and the Global Challenge Sao Paulo. This would be his first participation in premier events. Despite being regarded as the underdog in the IEM Kiev in January 2012, he made it out of the group stage convincingly at the expense of HerO and qxc. His run in the playoffs was short-lived though, as he was eliminated in the quarterfinals by the eventual winner of the tournament; MMA. Three weeks later, in Sao Paulo, he managed to proceed to the playoff bracket again. Not losing a single game in the group stage against DeMusliM, XlorD or Tunico. He wasn't able to perform better than in Kiev being eliminated in quarterfinals again; by ReaL. His achievements in both these events granted him enough points in the IEM rankings to earn a spot in the IEM Season VI - World Championship, the final step of the season, held in March 2012. Feast went on an impressive run in the group stage: losing to DarKFoRcE, but defeating Kas, IdrA, SuperNova, and ReaL, hence taking the first place of his group. He was then seeded directly in quarterfinals, and became the last foreigner standing after HasuObs's defeat against Killer; who would be Feast's next opponent. Despite being regarded as the underdog, the Belgian player managed to take the upper hand over Killer in a close series. He advanced to face MC in the semifinals and was ultimately defeated but he managed to take a game against this prestigious opponent. Feast was overwhelmed 0-3 by MMA in the third place match, hence taking fourth place at the event.

On the 18th of February 2012, Grubby announced that he was now tutoring the Belgian player.[5]

Feast defeated White-Ra in a best of 15 sponsored by Pokerstrategy on the score of 8 to 5.

During the summer, it was announced that Feast would take a year off in order to focus on StarCraft II.[6] In July, he participated to AbsoluteArena Invitational, where he managed to beat Brat_OK and Fargo during the group stage, MaNa, White-Ra and Bly in the play-off, reaching the final, and eventually losing to Elfi, finishing second. The same month he also took part of IEM Season VII Cologne - European Qualifier, where he was seeded directly in stage 3. He defeated Naama, VortiX and sLivko in order to claim a spot of the main event. At IEM Season VII - Cologne, he was seeded into group B, alongside witg Kas, viOlet and PiG, with Mvp and NesTea joining the group through open bracket. He managed to beat Pig in his first match, but lost every other match, finishing 5 and thus was eliminated. A week after IEM Cologne, he entered Campus Party Europe, but lost against HasuObs and SuperNova in the groupe stage, hence was eliminated.

His next competition was Dreamhack Valencia 2012, where in managed to beat SortOf, MilLoRd and Gesport in the first group stage, Elfi, White-Ra and IeZaeL in the second group stage, but was swept by HerO in the round of 16.

In November 2012, he was the Belgian representative for ESWC 2012 but was eliminated in group stage, after loss against TargA and his teammate ForGG. After ESWC, he participated to the DreamHack Winter 2012 - BYOC where he defeated Harstem in the final of his bracket, securing a spot for the main event. He was placed into group B, defeated MaNa, Socke and SaSe, losing to Bly and StarNaN, finishing second of his group and then advanced to the Ro12 where he faced NaNiwa. Despite taking an early 2-0 lead, he would suffer 3 consecutives loss, losing 2-3 against NaNiwa and was eliminated.

In December 8, he participated to the Francophone Championship Season 1 Grand Final at Millenium House, having securing a spot by finishing first of his group and beat Divi in the ro8. There he managed to beat Song in the semi and NeOAnGeL in the final, securing first place and winning his first tournament. He also obtained a spot for Numericable M-House Cup. During this cup, he was placed in group B with MC, DIMAGA and TomikuS. He would beat DIMAGA 2 -0 but then lost to MC in the winner’s match and to DIMAGA in the final match, and was eliminated. The same month, he was invited at HomeStory Cup VI. In his group, he managed to beat the favorite Stephano in his first match, but again losing winner’s match and final match, respectively against Socke and Stephano in a rematch.

The first HotS tournament for Feast was 2013 MLG Winter Championship. Despite a loss against Ret in the Showdowns, he was able to win the last-chance bracket, beating Snute, Grubby and MaNa. During the tournament, he played against Mvp but was defeated by the four time GSL champion, still managing to take a game from his opponent, one of the five games foreigners were able to take against Koreans during the MLG.

A month later, in April, he played in the play-offs of the Francophone Championship Season 2, of which he was the reigning champion. He played three flawless PvP series, against NeOAnGeL, his teammate Adelscott in the semifinal and ToD in the finals, winning ten PvP matches in a row and securing a second title. He also played in the 2013 WCS Europe Season 1 Qualifier, where he lost one game away from the qualification during the first qualifier against his teammate Dayshi, but fought back the next day and earned his spot for the Premier division, beating players such as Naama, TargA and PandaTank.

His groupe for the round of 32 of the WCS Europe Premier League Season 1 was composed of MMA, MaNa and SortOf. He managed to top his group, beating MaNa and then MMA. He was less successful in his round of 16 group, as he felt in challenger league after loss against Stephano and DIMAGA. In Challenger League, he was defeated by Bly in the Bracket Stage, and by uzer and TitaN in the groupstage, and was eliminated of the Europe WCS league.

After that he took a break from StarCraft II, which appeared later to be an extended break.[7]

In November, he participated in the open bracket of IEM Season VIII - Singapore where he beat TargA before losing to Squirtle and San.